Under the banner of the Interpreter, episode 5

As a reminder, we're discussing the two reviews by Spencer Kraus, a researcher for Jack Welch's Book of Mormon Central, that were published in Dan Peterson's Interpreter journal. I'm responding on my Interpreter Peer Reviews blog, here: https://interpreterpeerreviews.blogspot.com/

In this blog (bookofmormocentralamerica), we're exploring what Brother Kraus' two reviews reveal about the state of LDS apologetics, the citation cartel, and what passes for LDS scholarly endeavors today.

The other day I got a phone call from a well-known LDS scholar who has published in both BYU Studies and the Interpreter. He was quite dismayed, even shocked, by the tone and approach of Brother Kraus' reviews. He couldn't believe his colleagues would approve such work.

I replied that I don't mind criticism, that at least the reviews have brought the issues to the attention of Interpreter readers who are otherwise in a silo that prevents them from hearing multiple working hypotheses, and that these articles might open a few minds who have been oblivious of (or even complicit in) the current state of LDS apologetics.

Ask yourself, if you were an LDS teenager or college student and you read the Interpreter, in this case Brother Kraus' reviews, would you be less or more inclined to be affiliated with the Church?

Or, you were a "friend" of the Church and you read these reviews, would you be less or more inclined to want to join?

Let's say you listened to the recent broadcast on Sharing the Gospel. This month's Fifth Sunday focuses on the Love, Share and Invite initiative. The instructions include this:

Focus the meeting on the following two objectives:

And yet, for our modern apologists (including Jack and Dan), this is par for the course. They're so used to this type of rhetoric that they not only approve it, they encourage and promote it.

By now, it is, or should be, well known throughout the Church that many younger members struggle with their faith. Although problems with Church history, particularly SITH, rank at or near the top of their problems with the Church, interpersonal relationships are also a major factor.

Where I live, we have a YSA branch that has over 100 people on the list but fewer than 5 participate. That's not atypical. Another friend of mine told me that an Area President in another part of the world called him. They have known each other for a long time. The Area President asked my friend to come on a mission to help with YSAs because they had over 1,000 on the roster but can only account for about 25.

I've spoken to lots of missionaries, particularly senior couples, who are on MLS missions (member/leader support) who have similar experiences.

Young missionaries report to anyone who will listen that the people they contact promptly consult the Internet and come across CES Letter, Mormon Stories, and similar channels, all of whom rely on SITH and M2C to undermine faith. And yet, our apologists not only promote SITH and M2C, but castigate any faithful Latter-day Saint who dares to offer an alternative faithful interpretation.

Years ago, I knew a 16-year-old Priest (let's call him Sam) who attended regularly, although most of his friends at school were not LDS. One day in the Priests Quorum meeting, some of the Priests (the "popular" ones) ganged up on one of the others, teasing him about something. Sam stood up and walked out. Later, I asked him to come back. He declined. He said "My non-Mormon friends don't treat each other that way. Why would I want to spend time with guys like that who treat each other that way?"

He never returned to the Church.

His story is not uncommon. Most readers here undoubtedly know of similar situations within their wards, families, and friends. 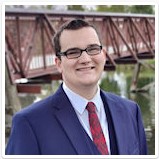 Can you imagine Brother Kraus as an Elders Quorum President writing or speaking about a member of his Quorum the way he wrote these reviews?

Or can you imagine Brother Kraus' father actually helping and encouraging him to do so, and being proud of him for publishing these reviews?

It's not merely the tone and rhetoric of these reviews that is distasteful. It's the desire for censorship that so many find repulsive.

It's one thing to disagree about an interpretation of Church history. As I've emphasized, I welcome and encourage the idea of multiple working hypotheses. Our own Articles of Faith encourage this principle. If we claim the privilege of worshiping Almighty God according to the dictates of our own conscience, we can hardly object when others do the same.

By definition, that means I readily acknowledge and even enjoy different opinions. That's why I'm fine with people who believe M2C, SITH, or any number of alternative interpretations.

I just have a different view. I think the evidence supports interpretations that corroborate and vindicate what Joseph and Oliver claimed.

When I look around and observe the fruits of M2C and SITH, they look rotten to me.

But the last thing I would do is seek to censor those ideas.

To the contrary, I encourage people to read what our scholars write. I think everyone in the Church should know what Royal Skousen has written in the Interpreter, for example. I think everyone should read Brother Kraus' reviews to better understand how our current crop of scholars think and approach these issues.

Then we can decide for ourselves whether we want to jump on the acrimonious censorship bandwagon that Jack and Dan have created through the citation cartel. We can decide if we want to encourage our rising generation of apologists such as Brother Kraus and his entourage to continue down this path.

We can decide for ourselves whether the Interpreter and Book of Mormon Central exemplify Love, Share, and Invite.

BTW, you might find it interesting to see the word cloud for Brother Kraus' reviews. You should ask yourself, what are these reviews about, actually?

For me, it's sadly funny to see the focus. Like the goofy Peter Pan, Brother Kraus seems obsessed with me. 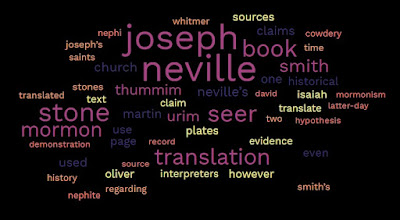 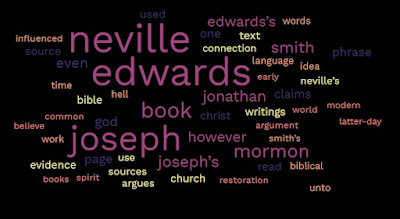