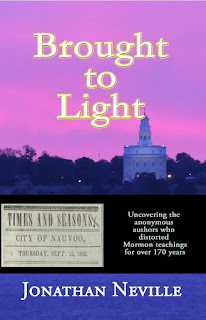 Brought to Light is the second in my trilogy about the Times and Seasons in Nauvoo. You might enjoy reading it because you want to know what Joseph Smith actually taught vs what has been attributed to him by mistake for decades. (Amazon).

When I wrote The Lost City of Zarahemla, my publisher limited the page count on the ground the people don't want long books. I had a lot of research left over, but I didn't know if I'd ever use it for anything but my own interest.

Lost City attracted a lot of attention and discussion, pro and con.

Church history issues have become integrally connected with questions about Book of Mormon geography and historicity.

Some people strongly resisted the idea that Benjamin Winchester was involved with the anonymous articles about Central America that provided a justification for looking in Central America for evidence of the Book of Mormon. They had long assumed Joseph Smith wrote, edited, or at least approved of these articles, and therefore felt they had Joseph's approval for their Mesoamerican theories of geography.

Think of it from the perspective of the Mesoamerican proponents who thought Joseph Smith approved of the two-Cumorahs theory that underlies the theory of a Mesoamerican setting.

Obviously, if Joseph didn't write, edit, or even approve of these articles--worse, if he opposed them--then a fundamental premise for the Mesoamerican theory simply evaporates. Instead of having Joseph on their side, the Mesoamerican proponents find themselves opposing Joseph, or at least rejecting what he taught.

I wasn't surprised to see strong opposition from the Mesoamerican advocates. Ironically, it's their own dogma that cause the problem. They are the ones who insisted that Cumorah cannot be in New York because it is too far from Central America. Their Mesoamerican tail is wagging the dog of the New York Cumorah.
_______________

On the other hand, those who were concerned about the notion that Joseph Smith was confused, or changed his mind over time, or misled the Church about Cumorah, were relieved to see that these notions were based on faulty assumptions.

Those who believe what Joseph and Oliver taught about Cumorah were glad to see that the prevailing assumptions about Joseph Smith and the Times and Seasons were questionable at best (and, in my opinion, unjustified by the evidence).

Those who believe Joseph and Oliver knew what they were talking about, and that Joseph was consistent his entire life, find their beliefs vindicated, or at least corroborated, by this approach toward Church history.
_______________

But Lost City was far from the last word on the subject. Brought to Light offers much more evidence to support the basic thesis of Lost City. Brought to Light goes beyond the anonymous articles about Central America to look at other material in the Times and Seasons.

In Brought to Light, I propose that Winchester wrote several other unattributed articles. In fact, I suggest that much of the material in lesson manuals, books and articles that has long been attributed to Joseph Smith in fact was not written by him.

This has implications for topics unrelated to the Book of Mormon geography, including the role of women in the Church.

Here is a table from the book that lists unattributed articles from the Times and Seasons that are found in the Joseph Smith manual:

Brought to Light contains a lot of detailed analysis that may be more than general audiences want, but those interested in Church history will find a lot of material that is not available elsewhere.