Book summaries - Whatever Happened to the Golden Plates? 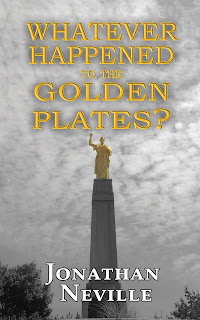 The title of this book reflects one of the most basic questions people have when they first hear about the restoration.

People asked Joseph Smith and the other early saints this same question. How could anyone who hears the story not wonder what happened to the plates?

Although I do offer an answer to the question in this book, most of the book explains the new paradigm about the plates themselves.

The traditional story is this: the angel Moroni showed Joseph a set of gold plates that he, Moroni, had placed in a stone box when he was still a mortal around 421 A.D. After 4 years, Joseph was allowed to remove the plates from the box. He took them to Harmony, PA, where he translated most of them (Book of Lehi through Book of Moroni). Then he went to Fayette and finished the translation from 1 Nephi through Words of Mormon. At that point, he returned the plates to the angel, who later showed them to the 3 witnesses. A few days later, Joseph showed the plates to the 8 witnesses near his parents' home outside of Palmyra. Again, Joseph returned the plates to the angel and they haven't been seen since.

The traditional story is fine as far as it goes, but when you think about it, it doesn't make sense and it doesn't explain numerous historical events.

Here are some examples.

1. The Title Page, which Joseph said was a literal translation from the last leaf of the plates, describes the contents of the plates as two abridgments, plus Moroni's sealing. It says nothing about the original plates of Nephi.

2. Joseph translated the Title Page before he left Harmony. If it was the last leaf, then why didn't he translate 1 Nephi - Words of Mormon in Harmony?

3. Joseph said the title page was from the "original Book of Mormon."

4. Witnesses described the plates as 4" thick and 6" thick.

5. No one can explain where the unabridged plates of Nephi fit into the record if it was included in the plates Moroni gave Joseph.

After assessing all the evidence, I concluded that the plates Joseph originally obtained from Moroni didn't include the plates of Nephi. You'll see that the more you think about it, the more obvious it is. I thought I'd write an article, but there was so much evidence that it grew into an entire book.

Before he left Harmony, Joseph gave the plates to a divine messenger who returned them to the repository in the Hill Cumorah. From there, the messenger got the plates of Nephi and took them to Fayette so Joseph could translate 1 Nephi through Words of Mormon.

Once we understand that there were two sets of plates, we can reconcile the different accounts and make sense of these details of Church history.

We also understand that the repository Mormon referred to in Mormon 6:6 was actually in the Hill Cumorah in New York, as explained by several of the men who knew Joseph Smith, including Brigham Young, Wilford Woodruff, Heber C. Kimball, and Orson Pratt.

Obviously, if the repository was in the New York Cumorah, the entire premise for the Mesoamerican theory collapses.

You can expect Mesoamerican advocates to insist on the traditional one set of plates theory, but they won't be able to show you evidence to support their idea.

Just remember it this way.

There is one Cumorah and two sets of plates.

Not two Cumorahs and one set of plates.
Posted by jonathan3d at 11:00 AM