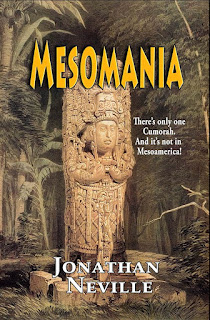 When I left BYU, I became friends with an archaeologist who was doing a peer review of John Sorenson's book, An Ancient American Setting for the Book of Mormon. I still have a copy of that early draft somewhere. I visited sites throughout Central America (and the rest of the world, on every continent).

Then, after decades of accepting the Mesoamerican setting for the Book of Mormon, I realized it was all a huge mistake. There was a major error in Church history that led to the assumption that Joseph Smith linked the Book of Mormon to Central America.

I now realize he never did, and I've written several books about the mistakes.

But a lot of people still believe in the Mesoamerican setting, in spite of the evidence. You might enjoy reading Mesomania to understand the psychology behind this obsession. (Amazon).
_________________

Some people think this book is a jab at the Mesoamerican theory, but it's not. I really like and respect those scholars and educators who have promoted that theory, and that's what led me to wonder what role psychology plays in all of this.

Most members of the Church don't realize that the Mesoamerican theory depends on the Two Cumorahs theory, and when they do learn this fact, they are usually surprised, if not shocked. And yet, the true believers--the people who actively promote the Mesoamerican theory--actually do believe and embrace the Two Cumorahs theory. I really wanted to understand the reasons why people adhere to a theory that rejects what Joseph Smith and Oliver Cowdery said, that contradicts the text itself, and that doesn't fit modern archaeology, anthropology, geology, geography, linguistics, etc.

In my opinion, most members of the Church were imprinted at a young age with images of Mesoamerica, mainly from the Arnold Friberg paintings, but also from other artwork, videos, books, articles, and maps. I've discussed this at length on this blog, such as here.

Because of this imprinting, Church members have inferred that the Church has endorsed, or quasi-endorsed, the Mesoamerican setting. That's not the case, of course, but it's easy to understand why people would think that. It is only when they learn how the Mesoamerican theory depends on the Two Cumorahs theory that they say, "Wait a minute." When they learn that the LDS scholars and educators who promote the Mesoamerican theory outright repudiate what Joseph Smith and Oliver Cowdery said, they usually change their minds.

I think Mesomania is fading in the light of new understandings about Church history and the relevant sciences. Eventually the confirmation bias that has perpetuated the Mesoamerican theory will be a thing of the past, and we will have a consensus about the Book of Mormon in North America.

But even then, people will wonder how the Mesoamerican theory persisted for so long.