New book: Because of this Theory 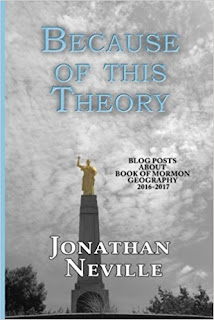 For a long time people have been asking for a book version of this blog. I've explained that the entire blog is far too much to print; last time I checked, it was at about 1600 pages.

But I wanted a printed copy myself, as well as a Kindle version, so I started working on it.

Instead of printing the entire blog, I started with March 2017 and went backwards until I had about 100,000 words of good material, which took me back to August, 2016. I edited it somewhat, eliminated time-related posts, and put the whole thing in book format. I also added a few posts from other blogs when they were directly referenced here.

I titled it Because of this Theory, referencing Joseph Fielding Smith's warning about the two-Cumorahs theory that, sadly, has been ignored by many LDS scholars and educators.

The Kindle version should be available soon, but I can't predict when.