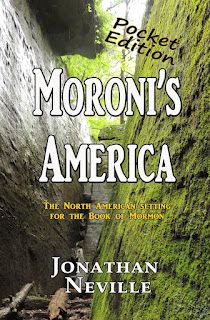 I was at a book signing for Moroni's America when a woman came up to me and said she's really like to read it, but it was too long. She flipped through it and saw the hundreds of footnotes and said she wanted something smaller.

It was a great idea.

I condensed and simplified Moroni's America into what we call the "Pocket edition." Granted, you need a 5" wide pocket, but this book is much smaller and offers a succinct introduction to the North American setting for the Book of Mormon.

One of the big challenges for missionaries (full-time, part-time, and member-missionaries) is explaining the Book of Mormon to investigators and motivating them to read it for themselves.

I always recommend that people who read the Book of Mormon for the first time start with Mosiah. That way, people get the pure gospel in an accessible, inspiring way.

Later, after they've made it to Moroni, they can go back and read 1 Nephi.

Starting with 1 Nephi is like reading the New Testament beginning with the Book of Revelation.

I think there is a reason why the Lord put 1 Nephi first, as I explain in Before the World Finds Out, but I also think that was more suitable to earlier generations (mainly of Christians who knew the Bible) than to the current generation.

Mosiah is the perfect starting place for the current generation and for non-Christians around the world.*
_______________

Speaking of people around the world, one reason I wrote the Pocket Edition is to help make the Book of Mormon understandable to nonmembers and people unfamiliar with Mormonism generally.

As part of that effort, we have adapted and translated the book into French and other languages are underway.

I'm hopeful that the distractions of the non-New York Cumorah theories (Mesoamerica, Baja, Peru, Chile, Panama, Eritrea, Malaysia, etc.) will fade into oblivion soon enough. IMO, it would be far better for people around the world to learn about the Book of Mormon from a perspective that supports and embraces what Joseph and Oliver said.

In my view, the sophistry used by the Mesoamerican scholars to justify their position and to reject what Joseph and Oliver said has no place in a worldwide Church that will soon have millions of new members.
_______________

*(I think the Book of Lehi will work for them as well.)
Posted by jonathan3d at 8:11 AM