Confusing messages at the MTC

A few months ago I toured the MTC in Provo, a wonderful campus that trains thousands of missionaries to go into the world to teach about the Restoration and bring people to Christ.

The campus is beautifully decorated with inspiring art and murals, such as these: 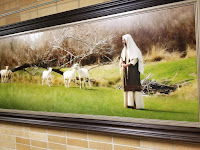 Some of the murals depict prophets, apostles, and missionaries in various settings. Here's one of Nephi in the Old World, for example: 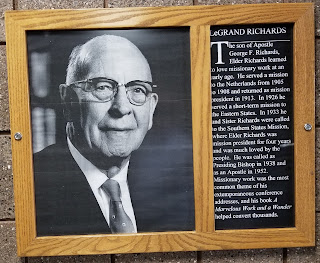 Buildings are named after famous missionaries, such as LeGrand Richards, who taught that the Hill Cumorah was in New York.

"It was at this time that Mormon deposited in the Hill Cumorah all the records that had been entrusted to him except a few plates that he gave to his son Moroni. (See Mormon 6.) About A.D. 420, Moroni placed these plates with those his father, Mormon, had already deposited in the hill. (See Moroni 10:1-2.)" A Marvelous Work and a Wonder, p. 73.

Another building is named for Parley P. Pratt, who also taught that Cumorah is in New York.

"This Book, which contained these things, was hid in the earth by Moroni, in a hill called by him, Cumorah, which hill is now in the State of New York, near the village of Palmyra, in Ontario County.” Autobiography of Parley P. Pratt, p. 43.

The administration building is named for Wilford Woodruff, who among other things taught that Cumorah was in New York:

"[Joseph] went [into] a Cave in the Hill Comoro with Oliver Cowdry & deposited those plates upon a table or shelf. In that room were deposited a large amount of gold plates Containing sacred records...  Joseph Smith said that Cave Contained tons of Choice Treasures & records."

Another building is named after Heber C. Kimball, who also taught that Cumorah was in New York:

"Joseph and others... went into a cave in the hill Cumorah, and saw more records than ten men could carry... There were books piled up on tables, book upon book. Those records this people will yet have, if they accept of the Book of Mormon and observe its precepts, and keep the commandments."

There is a building named after Edward Stevenson, who also taught that Cumorah was in New York:

"At one time a fierce battle was fought near where Buffalo, N.Y., now stands, wherein two million were lying strewn upon the earth, slain in battle and no one to bury them, till the stench drove them southward to the Hill Ramah, which was called Cumorah by the Nephite race."

Stevenson also related David Whitmer's statement that Oliver and Joseph had visited the room in Cumorah that contained the portion of gold plates not yet translated, etc.
______________

Missionaries studying in these MTC buildings are never told that the men for whom the buildings are named taught that there is one Hill Cumorah and it is in New York.

They are never told that Joseph Smith and Oliver Cowdery taught the same thing.

The missionaries are never told that members of the First Presidency, speaking in General Conference, have reaffirmed this basic teaching.

Instead, they are subjected to images of Mesoamerica.

Probably the most famous one is this: 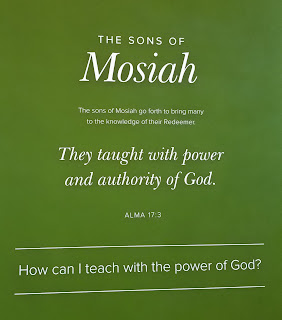 I zoomed in on the image so you can see the destination for the "sons of Mosiah."
It's a Mayan city of stone pyramids, reflecting the Mesoamerican/two-Cumorahs theory promoted by LDS intellectuals who have repudiated the consistent teachings of modern prophets and apostles.

There are other depictions of Mesoamerica in the MTC that I won't show here.

And there are exactly zero depictions of Cumorah in New York.
_____

I've been told by multiple sources that around 40% of returned missionaries leave the Church or go inactive after their missions. I can't independently verify that statistic, but that's about the percentage of my own missionary companions who have left the Church.

Imagine being a missionary at the Provo MTC, studying and eating and living in buildings named for valiant missionaries you want to emulate.

But only after you get into the mission field, or after you get home, do you learn that the setting for the Book of Mormon you were taught--a setting promoted by LDS intellectuals and reinforced by Church media and even the artwork in the MTC--repudiated the teachings of the very men for whom those buildings were named.

Imagine how you would feel to have believed and taught this Mesoamerican/two-Cumorahs theory, only to later discover Letter VII's explicit, detailed teaching about the New York Cumorah and all the supporting statements by prophets and apostles for over 150 years.

You would feel you've been lied to misled at the MTC, at BYU, in CES, and even in your Church classes.

At a minimum, you would feel confused and disturbed, as Joseph Fielding Smith warned when he discussed this Mesoamerican/two-Cumorahs theory.

But for many such missionaries, they lose their faith in the Book of Mormon, and that leads them out of the Church or into inactivity.

All because LDS intellectuals insist on promoting their pet theories, even to the point of telling the youth--and the missionaries--that the prophets and apostles are wrong.
_____