Why the scholars stick with Meso

I've been in upstate New York for a few days. Here's a photo I took at the Aaronic Priesthood Restoration Site in Pennsylvania.

This is one of my favorite Church history sites for several reasons, but one is the humble nature of the location where Joseph and Oliver translated the Harmony plates. It's pretty cool to think that the book which is destined to change the world was translated in such an unassuming and remote area.

And it's a stark contrast to the great and spacious intellectual buildings from which our LDS educators teach our youth to disbelieve what Joseph and Oliver said about Cumorah; i.e., that it was a fact that the final battles of the Jaredites and Nephites took place in western New York.
__________

A lot of people wonder why our LDS scholars stick with their Mesoamerican/two-Cumorahs theory.

I've addressed this before, such as in my book Mesomania and in several blog posts, but here's another angle to consider.

Our educators are unlikely to change their minds about Cumorah until their friends do. It's not a matter of facts or rational thinking; it's a matter of peer pressure, groupthink and psychology. 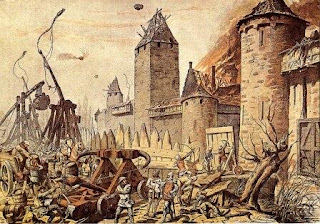 At this point, they have a fortress or seige mentality. Their barricade consists of a system of intertwined publications  that includes Meridian Magazine, BYU Studies, the Intepreter, FairMormon, BookofMormonCentral, BMAF.org, and related groups (what I used to call the "citation cartel").

They use these outlets to reinforce and comfort one another by repeating the same basic premises. They all think alike, and that's why they formed these publications and web pages that refuse to let readers know what the prophets and apostles have taught.

Just in the last week I've seen some of this fortress mentality at work .

Anyone who walks into a visitors center will see displays that teach the two-Cumorahs theory, as I've shown many times.

It is tragically unimaginable, and yet true, that the hundreds of thousands of people who have visited the Hill Cumorah in the last few years have left without even learning what Joseph and Oliver said about that sacred site (apart from edited comments about the stone box*).

Because of the Mesoamerican/two-Cumorahs dogma that our intellectuals have foisted on their students--students who have grown up to become Church employees who implement the dogma through every channel possible.

My post about watching General Conference with your BYU/CES teacher had a lot of readers, but not enough. I think every student at a BYU campus or in CES should be aware that their instructors reject the teachings of the prophets and apostles about the Hill Cumorah. I think every parent and donor should know this as well.

But don't think these instructors who support the Mesoamerican/two-Cumorahs theory are going to change their opposition to the prophets and apostles just because students ask questions.

As many readers here have observed, it is difficult to understand how these educators justify their position. Mostly they do it by claiming that Cumorah "cannot fit" their imaginary "requirements" for Cumorah, such as the "requirement" that there be volcanoes in the area and their imaginary belief that there are no artifacts in New York that corroborate what Joseph and Oliver taught.

Our intellectuals rely on their own learning. Like the great and spacious building of Lehi's dream, these intellectuals have no foundation except their own imagination. Because they have rejected the ordained prophets and apostles, they stand "as it were in the air, high above the earth."

They even mock those who believe the prophets and apostles, as I pointed out in that post.

The Mesoamerican/two-Cumorahs theory is among the best examples of this basic principle: "When they are learned they think they are wise, and they hearken not unto the counsel of God, for they set it aside, supposing they know of themselves, wherefore, their wisdom is foolishness and it profiteth them not." (2 Nephi 9:28)

Most members of the Church know that we "receive no witness until after the trial of [our] faith" (Ether 12:6). Those who trust and have faith in the words of the prophets and apostles receive the witness that what they teach is true.

Meanwhile, members of the Church and investigators will continue to visit Cumorah in New York and be kept in ignorance about the significance of that location as taught by Joseph, Oliver, and all of their contemporaries and successors.

*No visitors center that I know of shows visitors quotations from Letter VIII, the most detailed description of Moroni's stone box that we have.