Visiting Temple Square - Moroni at "a hill in New York"

As I explained on the consensus blog, I visited the North Visitors Center on Temple Square again Tuesday to see the awesome display of two Cumorahs. 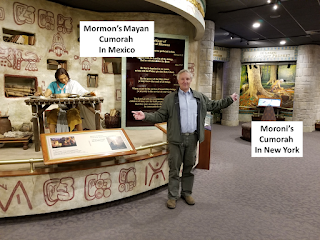 I want to point out some details of "Moroni's Cumorah," which our LDS intellectuals describe as "a hill in New York" where Moroni deposited the plates after walking 2,400 miles north from the "real Cumorah" they are still searching for in southern Mexico.

Why they're looking in Mexico is a fun story for another day.

But for now, imagine you're a missionary serving on Temple Square.

Millions of people visit Temple Square every year, and you take them to see this display of Mormon abridging the record in a Mayan cave. Then you take them across the hall (the distance representing the 2,400 miles) to New York where Moroni is burying the plates.

As a missionary, you hope your visitors don't know anything about Church history, because if they do, they will ask questions you can't answer without contradicting these displays.

For example, what happens when a visitor points out that Joseph Smith, Oliver Cowdery, Brigham Young, and every other prophet and apostle who has spoken on the issue has declared that there is one Cumorah and it is in New York?

Do you just hope no one asks the question? And how do you deal with the cognitive dissonance you feel every day when you walk through these displays?
_____

The problem is, these displays reflect what our intellectuals say, not what the scriptures and the prophets say.

Our intellectuals can't explain Church history so they resort to magical thinking and invented scenarios that contradict what Joseph and Oliver explained.

You're a missionary, taking a visitor to look at the display of Moroni on "a hill in New York." 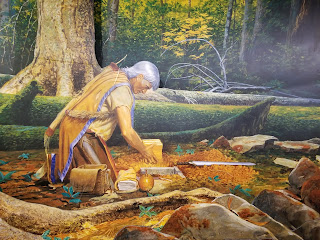 You explain that Moroni hauled the plates 2,400 miles from Mayan territory in Mexico, back where Mormon abridged the plates in a Mayan cave, and then buried them in a stone box on "a hill in New York," just as Joseph explained in Joseph Smith-History 1:51-52.

But you know better than to look up the scripture, and you definitely don't read it to your visitor, because the scripture says the box contained the plates, the Urim and Thummim, and the breastplate. That's all. Oliver affirmed this in Letter VIII.
"What about the round thing?" 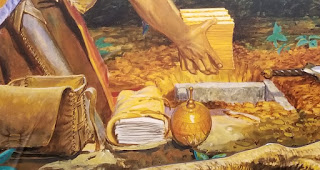 "That's the Liahona," you explain as you press the button to watch the video. You bite your tongue as the video shows Moroni putting the Liahona in the stone box because you know there are no accounts of the Liahona being in the stone box.
"And those letters?"
"Oh, those are letters Moroni's father wrote to him. He included them in the plates, in the Book of Moroni."
"So he wrote on the plates in New York?"
You know he did--Moroni told Joseph the record was "written and deposited" not far from Joseph's home--but you can't say that because it contradicts your script and the displays so you say, "We don't know where he wrote on the plates."
"But he's burying the plates so he already wrote on them. Why did he carry the letters all the way from Mexico if he already copied them onto the plates?"
"It's just a concept, I guess." By now, you want to change the subject, but your visitor is still interested in the display.
"What about that sword?" 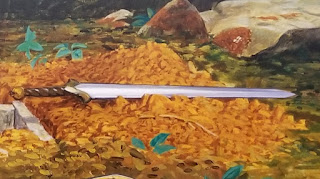 "Oh," you say, "that's the sword of Laban."
Your visitor presses the button on the screen and watches as Moroni puts the sword of Laban into the stone box.
"Wow," your visitor says, "that is a deep box. Or a small sword."
You say nothing. Now you're really glad you didn't read the scriptures to your visitor, and you want to divert your visitor's attention to one of the films or something.
Later, you wonder if your companion is wondering the same things you do, like, who made these displays? You find yourself wondering if someone translated the sealed portion to come up with all this stuff, but you realize the displays are really just reflecting the theories of a bunch of Mormon intellectuals who don't believe the scriptures or what the prophets have said.
_____
These displays are sophisticated persuasion.
The intellectuals who teach at BYU and in CES know that Joseph and Oliver taught that the Hill Cumorah was in New York. They explicitly stated that the "hill in New York" was not only the place where Moroni buried the plates, but also the scene of the final battles of the Jaredites and the Nephites and the location of Mormon's depository of Nephite records and artifacts. Their teaching was affirmed by Brigham Young and many others.
But the intellectuals teach that all the prophets and apostles are wrong.
Instead, they insist the "real Cumorah" is in Mexico, and they promote their theory at BYU, in CES, in BYU Studies, at FairMormon, and elsewhere.
But they have a problem.
They've been able to successfully suppress Letter VII--try finding a reference to it in any of the "scholarly," "peer-approved" LDS publications. They've been able to confuse students by claiming that the prophets themselves sent mixed messages, as I've explained here:
http://bookofmormonwars.blogspot.com/2017/10/fairmormons-famous-harold-b-lee.html
But they haven't been able to change the scriptures (yet).
Instead, they pre-suade people through art, media and displays so that when people read the scriptures, they already have a mental image that is more persuasive than the words on the page.
Anyone reading Joseph Smith-History (or Letter VIII) sees that there were three things in Moroni's stone box. But once you've been pre-suaded by the Visitors Center, you will actually believe the box also contained the Liahona and the sword of Laban.
Why do the intellectuals need you to think this?
Because of D&C 17:1
"Behold, I say unto you, that you must rely upon my word, which if you do with full purpose of heart, you shall have a view of the plates, and also of the breastplate, the sword of Laban, the Urim and Thummim, which were given to the brother of Jared upon the mount, when he talked with the Lord face to face, and the miraculous directors [Liahona] which were given to Lehi while in the wilderness, on the borders of the Red Sea."
The official Testimony of the Three Witnesses only mentions the plates. That's all anyone talked about at the time. It was only later that they saw the other objects, along with many other things. That's why the verse separates the other objects with the clause "and also." It was later, at the depository, not in the woods near Fayette, that the witnesses saw these other objects.
Oliver and Joseph explained that Mormon's depository was in the New York hill, and Brigham Young confirmed that these additional objects were in Mormon's depository in the New York hill.
But our intellectuals insist they were wrong because Mormon's depository was actually in Mexico, as depicted in the display on Temple Square.
Therefore, the only possible source for the Liahona and the sword of Laban was Moroni's stone box.
Therefore, according to the intellectuals, the scriptures are wrong, or at least incomplete. Joseph Smith forgot to list the Liahona and the sword of Laban when he wrote Joseph Smith-History 1:51-52. Oliver Cowdery forgot to mention them in Letter VIII.
That's why the display depicts this.

If the display depicted the words of the prophets instead of the words of the intellectuals, we'd have Mormon's depository and Moroni's stone box in the same hill, as Joseph, Oliver and all of their contemporaries and successors have taught.

We would have Moroni placing only the plates, the Urim and Thummim, and the breastplate in the stone box.
We would have the other objects in the depository.
And the missionaries wouldn't have to dance around the obvious disconnect between the displays and the words of the prophets.
Posted by jonathan3d at 8:15 AM