How intellectuals "prove" their theories

The intellectuals in the Church who support the Mesoamerican/two-Cumorahs theory have a final argument they are making.

They openly acknowledged that they repudiate every prophet and apostle who has spoken about Cumorah for the last 150 years.

They also admit that while they insist their interpretation of the text is the "correct" one, they can't agree among themselves about such basics as the location of Cumorah, the narrow neck of land, or even the river Sidon.

Nevertheless, they insist the Church has endorsed their position because of Church art.

They sometimes state that the Church is "neutral" on Book of Mormon geography, but they wink at that because they, like everyone else, know the Church's media department has depicted the Mesoamerican/two-Cumorahs theory since at least 1981.

Here's a graphic that shows the cycle: 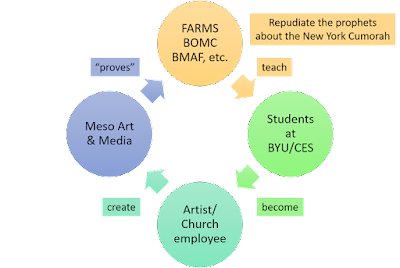 Here's how it works.

1. Mesoamerican advocates such as the old FARMS (morphed into the Interpreter), FairMormon, BMAF, and now BMAF's corporate subsidiary Book of Mormon Central (BOMC), develop a theory of Book of Mormon geography that repudiates the prophets and apostles by insisting that the Hill Cumorah (Mormon 6:6) "cannot" be in New York.

Instead, these intellectuals persuade themselves that Joseph Smith, Oliver Cowdery, and all of their contemporaries and successors were ignorant speculators who misled the Church about Cumorah's location. This includes members of the First Presidency speaking in General Conference.

Obviously, this abstract map is a ruse to evade the new prohibition at BYU against using a real-world geography. Except it's even worse, because they're depicting Cumorah in a fantasy land. Apparently, as long as we don't show Cumorah in New York, any other geography is fine to teach at BYU/CES now.

3. With the Mesoamerican/two-Cumorahs theory firmly imprinted on their minds by teachers they trust, these BYU/CES students graduate and enter the workforce. Some become artists; others become Church employees. They depict the Book of Mormon just as they've been taught by the intellectuals; i.e., as a story of people living in southern Mexico and Guatemala, the area of Mesoamerica which they claim is the location of the promised land and the great nation that would be the site of the restoration and that would fulfill Isaiah's prophecies and that would send missionaries throughout the world, etc.

4. The Mesoamerican/two-Cumorahs artwork and media gain widespread acceptance in the Church by default, including the two-Cumorahs display on Temple Square in the North Visitors Center and the illustrations in the missionary edition of the Book of Mormon itself.

Then the Mesoamerican proponents use this artwork and media as evidence that the Church approves their theory.

Tomorrow I'll give a recent example of this approach.

Except in my opinion, teaching students that the intellectuals are right and the prophets and apostles are wrong is exactly the opposite of what these BYU/CES faculty should be doing.

This plan, well-executed by the intellectuals, is based on a premise that I question.

They claim the Brethren (meaning the highest leaders of the Church) have approved of this artwork because of its content; i.e., that the Brethren endorse the Mesoamerican/two-Cumorahs theory.

But the premise relies on this basic assertion: that the Brethren have repudiated all prior prophets and apostles who have spoken about Cumorah in New York without a more official statement than a series of artists' conceptions.

Instead, at least in my opinion, the far more likely explanation is that the Brethren delegate the artwork to experts whom they trust because they were educated by BYU/CES. To the extent the Brethren "approve" this artwork, it is not because they are making an official statement about the Church's position on the Hill Cumorah.
_____

That said, the impact of this artwork and media is powerful. In my view, it has misled generations of youth, missionaries, investigators, and even mature members of the Church. It is the fulfillment of Joseph Fielding Smith's early warning that because of this theory, members of the Church would become confused and disturbed in their faith in the Book of Mormon.

These intellectuals are teaching their students to believe them, the intellectuals, whenever their opinions differ from what the prophets and apostles have said. This problem extends far beyond the question of Cumorah, of course, but this is a specific application that everyone can see and that the intellectuals openly admit.
_____

The fact that these intellectuals have not informed the Brethren about all the facts, or even about all the alternatives to their Mesoamerican/two-Cumorahs theory, is a serious problem that I'll be discussing more in the future.