Knowing Why BOMC censors North American as a working hypothesis

Book of Mormon Central has released a new book titled Knowing Why: 137 Evidences that the Book of Mormon is True. The book is a compilation of KnoWhys originally published on the web page and edited for the print publication.

There's a lot of good material in this book, but it is full of Mesoamerican dogma.

The first section opens with a wonderful photo that makes the reader think finally, Book of Mormon Central is going to consider what Joseph Smith said about the Book of Mormon. 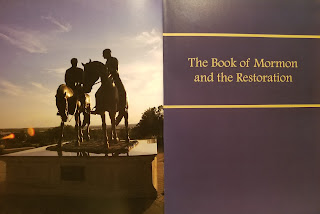 This is the statue of Joseph and Hyrum that sits just west of the temple in Nauvoo. Behind them is the Mississippi River and the spot designated in D&C 125 as the city named Zarahemla. The settlement was actually named Zarahemla as required by the revelation, and there was an intention to build a temple there facing the one in Nauvoo, but the Saints were driven from Nauvoo before these plans could be realized.

Many think the Lord named the spot because it was the site of the ancient Nephite city of Zarahemla (a topic for another post). So when you open the book and see this, you think, wow, maybe our friends at Book of Mormon Central are finally going to relate the Book of Mormon to Church history. 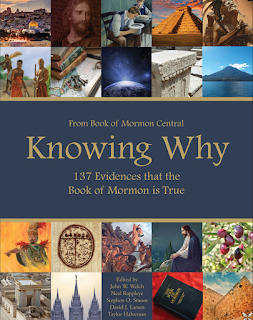 But then you turn the pages and you're disappointed to see no such connection.

Which we should have expected based on the Mesoamerican references on the cover.

We have the usual suspects: a "Mayan temple" (Chichen Itza, constructed after Book of Mormon time frames), Lake Atitlan (a lake in the highlands of Guatemala which promoters of the Mesoamerican/two-Cumorahs theory like to call the Waters of Mormon), and several examples of Book of Mormon characters dressed up as Mayans.

I like a lot of the material Book of Mormon Central produces, particularly on their Old World research. But their Mesomania makes it difficult for me to accept their work overall. Their dogmatic editorial slant puts us in the position of constantly wondering whether they are telling us everything. Often they are not, as I'll show in just one example below.

The people behind this book claim that the "real Cumorah" is somewhere in southern Mexico. Their dogmatic insistence on repudiating Joseph, Oliver, and all the prophets and apostles who have spoken about Cumorah undermines the credibility of everything they do.*

This kind of thinking leads to the Mesoamerican/two-Cumorahs theory being displayed right on Temple Square, as I mentioned here:
http://bookofmormonwars.blogspot.com/2017/11/visiting-temple-square-moroni-at-hill.html
_____

I'm only taking the time to look at one example of Mesomania, but there are many that you will find if you read this book.

Item #72 on page 172 addresses the question, "Why are horses mentioned in the Book of Mormon?"

The answer: "Readers can interpret the presence of horses in the Book of Mormon in a variety of different ways."

But they only give us these three.

1. Horses in the Archaeological Record
2. Nephi Could Have Borrowed the Word Horse
3. Horse Could Be a Result of Translation

Let's look at each one.

1. Horses in the Archaeological Record

This section cites Daniel Johnson's excellent article in BYU Studies, which Book of Mormon Central has in its archive here: https://archive.bookofmormoncentral.org/node/310

The article includes this map: 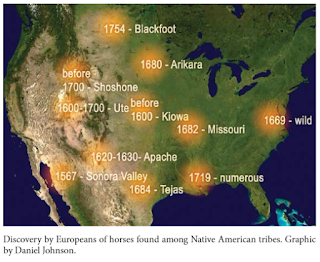 The article explains: "By conventional wis­dom, horses from these [Spanish] expeditions would have to be the earliest sources for horses later described among indigenous peoples. As documented by the Spanish conquerors and their chroniclers themselves, the actual events of each of these excursions into the New World prove such an assertion practically impossible... Researchers used to believe that horses discarded by Hernando de Soto’s men in 1541 were the ancestors of all American horses west of the lower Mississippi. That assertion now rests firmly in the realm of fiction."

The article notes that while researchers have tested DNA samples from Mexico, they all date to ice age or post-contact periods. However, they "have had surprising results from some North American samples. A horse bone from Pratt Cave near El Paso, Texas, dated from 6020 to 5890  BC. Another specimen from Wolf Spider Cave in Colorado dated from AD 1260 to 1400. A bone from Horsethief Cave in Wyoming dated to 1100 BC."

These are within Book of Mormon time frames for Jaredites, and they are in locations we would expect if the Jaredites landed in North America and "spread upon the face of the land."

But, as a BYU Studies publication, the article cannot corroborate what Joseph Smith taught about Cumorah in New York. It cannot connect the evidence in North America to a North American setting.

Instead, the article has to focus on Mesoamerica, where a horse tooth was found in Yucatan, and indulge in speculation such as this:

"Analysts can safely say it is likely that no horses existed in the Yucatán Peninsula or elsewhere in Mesoamerica by the Maya Postclassic era. But what if some horse populations survived in remote enough areas and in small enough numbers not to have been noticed by the Span­ish conquerors and other European settlers?"

Compare that to the widespread and well-established use of horses by the North American Indian tribes, including horses such as the pinto that cannot be traced to Spanish breeds.

2. Nephi Could Have Borrowed the Word Horse

Because there were no horses in Mesoamerica during Book of Mormon time frames, the book proposes this: "Another approach to this question suggests that the word horse in the Book of Mormon is being used to refer to a different animal... Different Maya and Aztec groups applied their labels for deer or tapir to the Spaniards' horses."

I'm all in favor of multiple working hypotheses, but why does Book of Mormon Central go to such lengths to reject (and censor) any working hypothesis that corroborates what Joseph, Oliver, and all the modern prophets and apostles have taught about Cumorah in New York?

3. Horse Could Be a Result of Translation

Here we have the infamous theory that Joseph mistranslated the text. "It is also possible that horse is a 'translator anachronism,' Brant A. Gardner explained... Without the original text, it is impossible to be sure whether horse is a loan-shift the Nephites made or an anachronism caused by translation, but in either case the word horse would not refer to what today's readers might assume or expect."

Later, the article quotes Brother Gardner to say, "In the vast majority of the cases, it is reasonable that we are seeing a translation anachronism rather than a historical anachronism."

How about a working hypothesis that Joseph translated the text correctly and the Nephites did have horses in North America?

That possibility never appears in the article.
_____

BTW, you'll be interested to note that Covenant Communications published the book. Covenant has a long-held editorial policy in favor of the Mesoamerican/two-Cumorahs theory. They have rejected books that corroborate what Joseph and Oliver taught about the New York Hill Cumorah because they are "too controversial."
_____

I freely admit that I am biased in favor of supporting the teachings of the prophets. Apart from Mesomania, I can't understand why Book of Mormon Central is so firmly biased against supporting those teachings.

But it's not only a case of deferring to the prophets. The archaeology, anthropology, geology, and geography of North America, starting with Cumorah in New York, are all a better fit to the actual text than the Mesoamerican/two-Cumorahs theory.