A positive step? I hope so.

Readers tell me that BMAF has changed its corporate mission. This is a nice step in the right direction--I hope.

It's nice to see a sort of olive branch extended just before General Conference, so I wanted to recognize it and remind readers here that I like and respect the people affiliated with BMAF and its subsidiaries and affiliates. Everyone has good intentions and wants to share the Book of Mormon.

I think we can all work together. All it takes is a mutual commitment to full disclosure and tolerance of others' views.

Maybe we can all remember what President Nelson said about how good inspiration is based upon good information--a powerful indictment of censorship.

Before we look at the change at BMAF (in the table below), we need to consider some context.
_____ 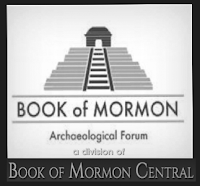 Despite what this logo claims, Book of Mormon Central is a subsidiary of BMAF (Book of Mormon Archaeological Forum). BMAF.org has long been a promoter of M2C (the Mesoamerican/two-Cumorahs theory) and their web page still archives some of the articles that attracted my attention to this topic in the first place.

Years ago, I was a strong believer and supporter of M2C. After all, I had been educated by CES and BYU, which means I didn't know what the prophets had taught about the New York Cumorah.

Just like today's youth in the Church, I was a victim of M2C censorship.

Just like today's fine young scholars employed by Book of Mormon Central, I trusted my mentors and BYU professors who taught M2C as the only possible explanation for the Book of Mormon.

I used to read all the FARMS materials. I attended conferences and lectures. I viewed everything through the M2C filter and confirmed all my biases. I worked with an archaeologist who did early peer reviews of John Sorenson's book, An Ancient American Setting for the Book of Mormon. I visited sites in Mesoamerica. I was "all in" on M2C.

Then I noticed that FARMS was resorting to logical fallacies, such as ad hominem attacks on critics, including critics of M2C who were good members of the Church. I read some of the articles (they are still archived on bmaf.org) and thought to myself, "this is nonsense."

It struck me that FARMS had devolved into pure advocacy. It was anti-scientific. The more I re-examined the material, the more I realized I had been duped by a hoax. The M2C hoax.
_____

FARMS was eventually merged into the Maxwell Institute, where it was defanged. But the principles just changed venue. They formed new organizations: the Interpreter Foundation, which publishes the Interpreter journal and Book of Mormon Central, a multi-million dollar organization that operates the web page and spreads M2C on social media.

Both organizations started with lofty promises of openness and diversity, but like FARMS, both devolved quickly into advocacy organizations. They promoted M2C exclusively--and still do. They still resort to the same logical fallacies. They claim their work is "peer reviewed" but both terms are misleading. The only "peers" they run the material by are like-minded M2C advocates, and the only "review" they conduct is to assure compliance with the M2C orthodoxy. For examples, you can see my blog that looks at a few.
http://interpreterpeerreviews.blogspot.com/

Except now they raise and spend millions of dollars to promote M2C. Their employees are active on social media. They claim the support of the prophets and the Church, in direct violation of the Gospel Topics Essay on Book of Mormon Geography. They coordinate with BYU Studies and Meridian Magazine, the Maxwell Institute, and other organizations to promote M2C and enforce censorship of alternatives, including (especially) the teachings of the prophets about the New York Cumorah.
_____

There have been moments of hope, however. Early on, I offered to let Book of Mormon Central put the first edition of my book, Letter VII, on its web page for free. They accepted because they recognized it was accurate Church history. Of course, Letter VII establishes the New York Cumorah as a fact, which contradicts that basic premise of M2C. By including the book in their archive, they took a step towards openness and diversity of thought.

But after a while, Book of Mormon Central removed Letter VII from its archive. They replaced it with a "Kno-Why" telling readers why they should distrust Oliver Cowdery and all the prophets and apostles who have reaffirmed the New York Cumorah.

It's the worst of FARMS all over again.

Years ago, I agreed with the M2C scholars that, in the interests of harmony, I would delete this blog if they would stop their censorship and remove their material that attacked alternatives to M2C. My offer remains open. I like and respect the M2C scholars. They are great people. I admire all their work apart from M2C advocacy.

About 90% of what is on the Book of Mormon Central web page is great material. I use their archive material all the time and I encourage others to use it.

(The Interpreter, by contrast, is hopeless. The name itself gives away the editorial conceit; i.e., the intellectuals there purport to interpret everything for their readers. There are very few Interpreter articles that I could recommend, which is a shame because with a little legitimate peer review, much of that material could be salvaged and become useful.)

However, the M2C advocates at Book of Mormon Central have doubled down on the M2C hoax, as we all see when we look at their web page. They could easily add some comparison tables, such as the one at the end of this post. They could put material in their archives that supports, instead of repudiates, the teachings of the prophets about the New York Cumorah.

So far, they've refused. But maybe they're getting the message that insisting on M2C to the exclusion of everything else is not the best way to share the Book of Mormon.

Maybe they will decide to trust members of the Church to make informed decisions.

Which brings us to the change at BMAF.org.

They recently modified their Mission Statement page to portray an image of openness and diversity.

It's not much, but it is a step in the right direction. Whether it will produce any substantive changes remains to be seen.

The comparison charts below allow readers to decide which approach aligns with their personal beliefs. Such a chart avoids the problem of censorship. By enabling informed decisions, the charts fulfill the purpose of the Church's position of neutrality that recognizes individual freedom to choose what to believe.

When I posted this in August 2016, I tried to make it completely neutral and accurate, and I solicited comment. No one offered any corrections or changes, so I assume it remains valid. Of course, both sides could edit it as they see fit.

Publishing this would reflect the intellectual honesty, openness and cooperation that ought to prevail at Book of Mormon Central. Let me know if you see it posted there.
_____

Here's my first look at areas in which the two theories agree and agree to disagree. I've tried to reflect both sides as accurately as possible. If anyone has more or different ideas, I'm open to editing this. In the interest of simplicity, I haven't provided links, but the material is widely available. Post a comment or email me if you want to know more about a particular item.
And here's where we agree to disagree. Everyone can choose which position he/she agrees with on each topic. Other ideas are also fine.
There's also a useful decision tree here:

http://bookofmormonconsensus.blogspot.com/2017/02/cumorah-decision-tree-for-book-of.html
Posted by jonathan3d at 7:05 AM