Once you recognize that Mormon's Codex is a long-winded academic justification for repudiating the teachings of the prophets, you see the logical fallacies and circular reasoning throughout the book. Today we'll look specifically at Cumorah.
_____

"This book presents a wide array of evidence that the Book of Mormon is an ancient historical record that could only have been produced by a writer who lived in Mesoamerica (southern Mexico and northern Central America) many centuries before Spanish explorers reached that area.... Numerous theories have, of course, been proposed to correlate Book of Mormon geography with the modern map of the Americas. None of these theories have been considered definitive by authorities of the Church of Jesus Christ of Latter-day Saints. In chapters 2 and 7, I explain why I consider only one of those theories--involving a particular area in Mesoamerica--to escape the fatal flaws exhibited by all the others."

I suspect most readers glide right over this sleight-of-hand rhetoric. The truth, though, is that Church authorities have always made a clear distinction between fact and theory regarding Book of Mormon geography.

Fact: The Hill Cumorah is in New York. This was established as a fact in Letter VII, written by President Oliver Cowdery who was an eye-witness to the depository of Nephite records in that hill (Mormon 6:6). Joseph Smith helped write these letters, had them copied into his personal history, and endorsed their republication for the rest of his life. The fact that Cumorah is in New York has been repeated many times by Church leaders, including by members of the First Presidency speaking in General Conference. No member of the First Presidency or Quorum of the Twelve has ever repudiated this teaching of his predecessors.

Theory: Church leaders have always said don't know for sure the locations of other Book of Mormon events, so every proposed geography other than the New York Cumorah is necessarily a theory.

All of this means that, starting right from the outset, Mormon's Codex is propaganda, not scholarship.
_____

Mormon's Codex does refer to Cumorah several times. In a passage that is really the heart of M2C, the book even addresses the teachings of the prophets about the New York Cumorah, albeit dismissively and obliquely:

"There remain Latter-day Saints who insist that the final destruction of the Nephites took place in New York, but any such idea is manifestly absurd. Hundreds of thousands of Nephites traipsing across the Mississippi Valley to New York, pursued (why?) by hundred of thousands of Lamanites, is a scenario worthy only of a witless sci-fi movie, not of history."

The disdain expressed here for the teachings of the prophets persists in all the writings of the M2C citation cartel.

Book of Mormon Central, BYU Studies, the Interpreter, Meridian Magazine, and other members of the M2C citation cartel continue to teach that the New York Cumorah is absurd.

The fine young scholars employed by Book of Mormon Central are active on the Internet, seeking to persuade their peers that the prophets are wrong.

Employees at BYU, CES, and COB (the Church Office Building) continue to teach the youth of the Church (as well as everyone else in the world) that the teachings of the prophets about the New York Cumorah are absurd.

Relying on the illusion of scholarship created by the M2C intellectuals, the authors of Saints actually altered Church history to censor the teachings of the prophets about the New York Cumorah.

Even the anonymous Gospel Topics essay on Book of Mormon Geography, already changed once, purports to overturn the long-held teachings of Church leaders about the New York Cumorah without even acknowledging those teachings.

All of this is the result of the illusion of scholarship that Mormon's Codex typifies.
_____

Ironically, we could agree with Brother Sorenson and still accept the teachings of the prophets.

But the conclusion would be the exact opposite of M2C.

If it's absurd to think that hundreds of thousands of Nephites would traipse across the Mississippi Valley to New York, and if we accept the teachings of the prophets that Cumorah is in New York, then the absurd element is thinking that the Nephites came from Mesoamerica in the first place.

That possibility never seems to occur to Brother Sorenson or the rest of the M2C citation cartel. It's one of the main reasons why the material they produce is merely an illusion of scholarship.

Whatever it is, the work of the M2C citation cartel is not scientific. No scientist censors viable alternative explanations without at least carefully considering them and explaining the reasons for rejecting them.

(And yes, I realize they claim they have done so, but as we've seen before, their treatment consists of one or two brief outcome-oriented articles that I've addressed in detail on this blog before.)

To be clear, I do not reject the Mesoamerican setting and I won't until it has been rejected by the prophets. However, I think it is implausible, given the New York Cumorah. I think the evidence from ancient North America aligns far better with the text of the Book of Mormon than the evidence from Mesoamerica, Baja, Panama, etc.

For me, the distinction between fact and theory, between the New York Cumorah and everything else, is so well established by the prophets that it is inexcusable to censor, let alone repudiate, the teachings of the prophets.

It's a side benefit that the fact of the New York Cumorah is so well supported by available archaeology, anthropology, geography, and geology.
_____

Mormon's Codex is a classic case of the tail wagging the dog. 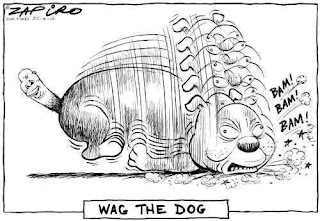 Here we have an admitted theory--the idea that the Book of Mormon took place in Mesoamerica--being used to repudiate a known fact taught by eye-witnesses and prophets of God for over 140 years, including members of the First Presidency speaking in General Conference.

The key point is this:

Mormon's Codex (and M2C as a whole) depends entirely on the premise that the prophets are wrong about the New York Cumorah.

- Because they are wrong, any theory that identifies Cumorah in New York is also wrong.

- Because such evidence is not obvious, believers must reinterpret the text so it fits the evidence that actually exists in Mesoamerica.

- Hence, we have Mormon's Codex and all the rest of the publications from the M2C citation cartel.

All of the "correspondences" and "parallels" in Mormon's Codex are a product of this circular reasoning. Most of them are attributes common to most human societies--especially the Asian societies from which the Mayans came.
_____

The treatment of Cumorah in Mormon's Codex is an illusion of scholarship, as you'll see if you read it carefully. Here are some examples:

"In the final stage of their retreat, all the identifiable Nephites assembled near the hill Cumorah, probably Cerro El Vigia in south-central Veracruz....

When all the remaining Nephites were 'gathered in,' the numerically superior Lamanite horde waged battle. In a single day they exterminated all 23 units of the defenders (each nominally of 10,000 men)....

Finally, the hill where the end came for the Jaredites, who called it Ramah, and the location of the last battle of the Nephites at the same hill (they called it Cumorah), have a highly likely correspondence to Cerro El Vigia (see fig. 7.2), an outlier on the northwest of the Tuxtla Mountains. In overall location and in a dozen other features, the textual information in the Book of Mormon agrees with the geographical situation. 72"

Brother Palmer is the one who wrote the self-serving entry on Cumorah in the Encyclopedia of Mormonism that cites only his own book for authority, again in classic M2C citation cartel fashion. You can read my discussions of his book if you search for "David Palmer" on this blog. Brother Palmer cites the anonymous articles in the Times and Seasons for authority, while ignoring the teachings of the prophets entirely, except for a brief dismissal of Letter VII, which he doesn't even quote.
_____

As you go through the "criteria" for Cumorah set forth in Mormon's Codex and In Search of Cumorah, you'll see that the criteria are derived not from the text but from the assumed Mesoamerican setting. There must be volcanoes, for example, which Mormon and Moroni forgot to mention but which Brothers Sorenson and Palmer thoughtfully provide.

As I noted at the outset, once you recognize that Mormon's Codex is a long-winded justification for repudiating the prophets, you see the logical fallacies and circular reasoning throughout.

We'll have more examples in the next few posts.
Posted by jonathan3d at 8:36 AM