The M2C hoax -Part 7 - when science replaced the prophets

As I write this, I'm a short distance from the Hill Cumorah in New York. The book The Next Mormons reports that only 50% of LDS Millennials are confident that the Book of Mormon is a literal, historical account, and the percentage is declining.

None of this is surprising.

In fact, prophets have warned that this would happen, but their warnings have gone unheeded.*

Instead, the youth learn the BYU/CES fantasy map and the M2C hoax (the Mesoamerican/two-Cumorahs theory). Even visitors to the "Hill Cumorah" Visitors Center learn M2C.

(Actually, they don't even learn M2C. They are taught there is only one Cumorah, and it is in Mexico.)

The only place where visitors to Palmyra can see the teachings of the prophets about Cumorah is at the Oliver Cowdery Memorial about one mile north of the Hill Cumorah.

It's a simple fact, verifiable by anyone, that the prophets and apostles have long taught two things about Book of Mormon geography:

1. The Hill Cumorah of Mormon 6:6 is in New York.
2. We don't know for sure where the rest of the Book of Mormon events took place.

Anyone who questions these facts can read the reports of General Conference, as we've discussed before, such as here.

Nevertheless, a lot of people try to conflate (mix up) the two points because they don't believe what the prophets have taught about the New York Cumorah.
_____

We've seen how the Cumorah question arose as a contest between RLDS and LDS teachings around the turn of the century. Although LDS leaders, including members of the First Presidency speaking in General Conference, repeatedly reaffirmed Letter VII's teaching about the New York Cumorah, LDS intellectuals sided with the RLDS intellectuals.

M2C became the default position of the Church because employees at CES, BYU and COB (Church Office Building) rejected what the prophets taught.

In the 1980s, M2C went mainstream with two 1984 articles in the Ensign by John L. Sorenson titled "Digging into the Book of Mormon." You can red them here:

The articles were republished in the Liahona in 1985.

The Editor of the Ensign at the time, Jay M. Todd, was fascinated with the Mesoamerican theory. The articles were illustrated with photos of Mesoamerican sites and artifacts, as well as this map: 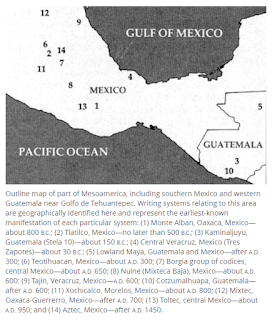 It is this interpretation that the intellectuals used to generate the fantasy maps taught by CES and BYU.

The articles did not directly articulate the M2C theory, but they laid the groundwork. It's very interesting how Brother Sorenson framed the discussion.

First, he established that the teachings of the prophets are irrelevant.

He didn't even cite a single one of them.

Instead, he claimed this: The issue is not one of intentions, beliefs, or testimony; it is one of scholarship. To compare the Book of Mormon with the findings of archaeology and related fields is a scholarly, intellectual activity. When anyone, Latter-day Saint or not, sets out to work in that domain, he must operate according to the rules which govern there.

Recall, this was published in the Ensign. So far as I know, this was the inflection point. This is where science replaced the prophets.

This is also when the censorship began.

In the left column below, I show some of the Ensign covers that depict M2C. It is fascinating to me because not one Ensign cover has ever depicted the New York Cumorah, not even when it was taught in General Conference. There has been zero effort to be "neutral" about Book of Mormon geography. It is all M2C, all the time.

The Ensign has never published Letter VII, either, even though all prior Church magazines did, including the Improvement Era. But now that M2C is the default position, Letter VII is censored.

(Fortunately, Joseph Smith had his scribes copy it into his journal, where anyone can read it in the Joseph Smith Papers. Otherwise, it would have been completely erased from accessible Church history. You can read about Letter VII here: http://www.lettervii.com/) 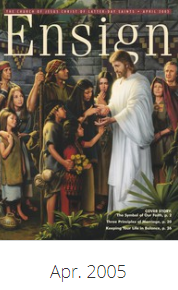 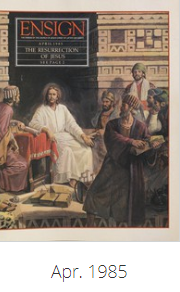 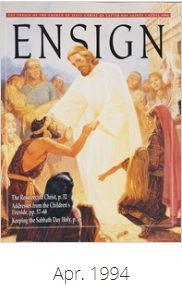 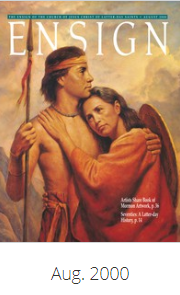 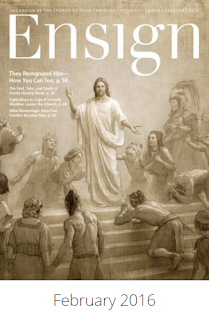 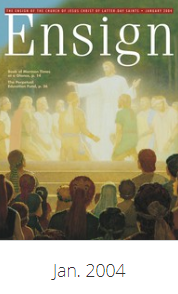 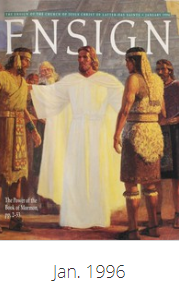 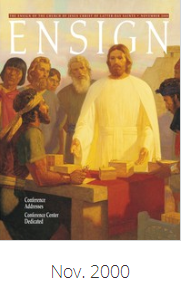 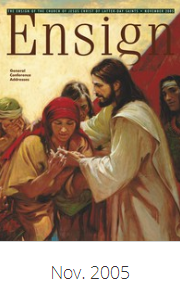 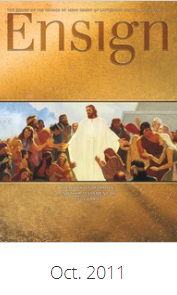 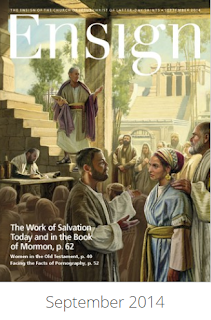 In 1975 and 1978, the New York Cumorah was reaffirmed in General Conference. Brother Sorenson didn't mention that. Today, hardly anyone even knows that.

Now, I agree with Brother Sorenson that the issue is not one of intentions, beliefs or testimony. But I don't agree it is an issue of scholarship exclusively. When the prophets have consistently and persistently taught that it is a fact that the Hill Cumorah of Mormon 6:6 is in New York, we don't cavalierly reject their teachings solely because we disagree with them.

But that's what Brother Sorenson and all his followers have done.

In my view, scientific analysis is useful and important, especially when, as in this case, it supports the teachings of the prophets about the New York Cumorah. 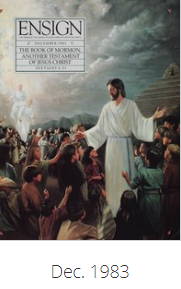 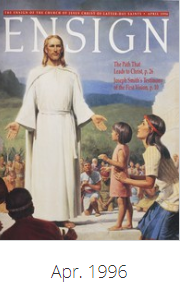 Intellectual honesty requires that the M2C intellectuals (and CES and BYU teachers) at least acknowledge the teachings of the prophets and explain why they reject those teachings.

It's not surprising that an article in the Ensign would avoid that topic, but to discerning readers the censorship is apparent--and it is just as apparent now in the Visitors Centers, curriculum, etc.
_____

A substantive discussion of geography cannot be given in these limited pages. However, for at least the past forty years, many students of the subject who have studied it in depth have reached similar basic conclusions: (1) the events reported by Nephite and Jaredite scribes evidently covered only a limited territory in the New World “land of promise,” and (2) there is presently known only one location in the Western Hemisphere that seems qualify as that scene.6

Notice how the article ignores the origins of M2C (the RLDS scholars who developed it in the late 1800s and early 1900 as part of their intellectual battle with LDS leaders). Instead, it frames M2C as something that originated in the 1940s among LDS scholars.

Notice also how the teachings of the prophets about Cumorah are both censored and repudiated. Brother Sorenson (and all of his M2C followers) don't even acknowledge alternatives to M2C; they insist Mesoamerica is the "only" location that "seems to qualify."

Of course, this is the inevitable result of their circular reasoning. They simply interpreted the text to match Mesoamerica, and then claimed only Mesoamerica "qualifies" according to their interpretation.

We admire the audacity of this sophistry, but we recognize it for what it is.

Footnote 6 is awesome. The article never mentions the term "Cumorah" but the footnote does. It cites books that established M2C by saying the prophets were wrong. Here are two of my favorites:

In Search of Cumorah: New Evidences for the Book of Mormon from Ancient Mexico, by David A. Palmer (Bountiful, Ut." Horizon Publishers, 1981).
_____

We don't have time to go through the entire Ensign articles, but I recommend that you do so. It's astonishing to see how M2C became established.

However, we do need to look one paragraph that was crucial to the foundation of M2C. (My comment in red.)

Of course, placing the Book of Mormon lands within a limited region like Mesoamerica requires that we take a fresh look at some of the long-standing questions that have been of interest to Book of Mormon readers. For example, how did the plates of Nephi get from the final battlefield near the “narrow neck of land”11 to where Joseph Smith obtained them in New York?

Here the Book of Mormon sheds no light.

[But the prophets not only share light, they declare it as a fact that the final battles took place in the valley west of the "hill in New York." Oliver Cowdery and Joseph Smith visited the depository of Nephite records in the hill Cumorah in New York. That alone justifies their teaching that this is the hill of Mormon 6:6.]

One obvious possibility is that Moroni himself may have carried the records to New York during his thirty-six years of wandering between the extermination of the Nephites and when he last wrote on the plates. (See Morm. 6:6; Moro. 1:1–4; Moro. 10:1.) Or he may have taken them there as a resurrected being. We only know that, whatever the means, in 1827 the plates were in the “hill of considerable size” near young Joseph Smith’s home at Palmyra, New York, where Moroni delivered the sacred record to him.

Notice how the teaching of the prophets--that the final battles of the Jaredites and Nephites took place in western New York--is nowhere considered even as a possibility. It is completely censored.

Also notice the rhetorical trick of referring to the "hill in New York" as a generic hill and not as the Hill Cumorah.

(3) In Mormon 3 through 6, it becomes clear that the final battles of the Nephites were localized, centering largely in the general area of the city of Desolation, which was in the land of Desolation “by the narrow pass which led into the land southward” (Morm. 3:5, 7).

[Here they conflate "narrow pass" with "narrow neck of land" and "narrow neck." All of this also assumes that "land southward" and "land northward" are proper nouns instead of relative terms, relative to the specific location and time involved in the narrative. These assumptions are not necessarily unreasonable, but they are not mandatory and, IMO, contradict a basic rule of interpretation, that different terms refer to different things. But for M2C intellectuals, the conclusion that the prophets are wrong about Cumorah is fundamental. It's a starting point. For me, just the opposite is the case; i.e., I start with what the prophets have taught and go from there.]

The point of this post is not to debate the terminology. That's a futile endeavor. I'm not interested in a "war of words" which can never be resolved and doesn't change anyone's mind anyway.

The point of this post is to show when and how science (as explained by M2C intellectuals) replaced the teachings of the prophets.

In my view, replacing the prophets with the intellectuals is and has been a huge mistake.

It's fine with me if people prefer to believe the M2C intellectuals instead of the prophets, I just think such an important decision should be made with full knowledge of

(i) what the prophets have taught and

(ii) what science tells us that affirms and corroborates those teachings.

Currently, most members of the Church are never even exposed to, let alone taught, either category of knowledge.

I hope to see that change. I continue to call upon my friends in the M2C citation cartel to provide their readers and followers with full, complete information.

I call on them to stop resorting to censorship and obfuscation to maintain M2C.

I call on them to trust their readers to make informed decisions.

*About the time when President Joseph F. Smith wanted to purchase the Hill Cumorah in New York, RLDS scholars began teaching that the "real" hill Cumorah was in Mexico. Joseph F. Smith had republished Letter VII; for him, the Cumorah question was settled.

His son, Joseph Fielding Smith, and Apostle and Church Historian at the time, warned that the "two-Cumorahs" theory would cause members of the Church to become confused and disturbed in their faith in the Book of Mormon. He reiterated that warning when he was President of the Quorum of the Twelve.

But the intellectuals rejected his warning.

Two months before he died, Brigham Young expressed his serious concern that the teaching about the New York Cumorah would be forgotten. He had good reason to be concerned, as we discussed here:

http://bookofmormonwars.blogspot.com/2017/08/brigham-young-140th-anniversary-of-his.html
Posted by jonathan3d at 9:56 AM