It's one thing for Education Week to promote the peep stone-in-a-hat version of Church history at the expense of teaching what Joseph and Oliver consistently taught, as I discussed last week here.

(Joseph and Oliver always said Joseph translated the engravings on the plates with the Urim and Thummim that Joseph obtained with the plates. Their adversaries said he merely read words off a stone in a hat.)

Presumably, attendees at Education Week can think for themselves. They can recognize that the revisionist Church historians are merely reviving a long-discredited theory promoted by enemies of the Church in 1834 and beyond.

But it's a different story when it comes to kids and youth in the Church.

I came across the following article recently, and while I really like and respect the author (who I'm not naming here), I find the suggestion astonishing. 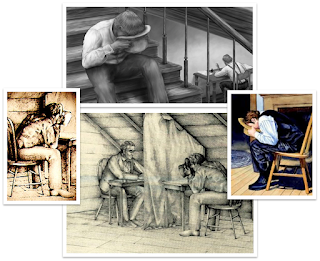 I don't see how anyone thinks that teaching the peep stone-in-a-hat narrative makes more sense, is more historically accurate, or is more believable than what Joseph and Oliver consistently taught.

See what you think.

Parents can teach their children whatever they want, of course. We see that in every culture in every part of the world. It seems to me, though, that the less plausible the teaching, the less likely the kids are going to believe it once they grow up.

I edited this to remove any names. Please don't google it to find the original article. Consider it as a hypothetical, and compare it to what you would teach your children, grandchildren, friends, students, etc.

Unfortunately, if you're not going to teach what Joseph Smith and Oliver Cowdery taught, the following conversation is about the only way you can explain what we're seeing in art, videos, and visitors centers today, thanks to the work of the revisionist Church historians.

Notice that the parents in this example never once told their kids what Joseph and Oliver said about the translation. I'm quite curious how the rising generation is going to handle the peep stone-in-a-hat narrative. Going back to the 1834 book Mormonism Unvailed, the peep stone-in-a-hat narrative has been pretty effective at persuading people to reject what Joseph and Oliver taught.

I suspect that success will continue with today's generations.
_____

After church, I was enjoying dinner with my wife and our two children. As is typical around many dinner tables, we asked our kids, “What did you learn at church today?”

Our children’s response to that question sparked an important, unplanned teaching moment about Joseph Smith, who restored The Church of Jesus Christ of Latter-day Saints, and the translation of the Book of Mormon.

IOW, they taught their kids that what Joseph and Oliver consistently taught was untrue.

Parents: What did you learn at church today?

Kids: We learned that the Book of Mormon was translated by the gift and power of God.

Parents: Do you know what that means?

Parents: Let’s explain it. First, a question. (We put a Hebrew Bible in front of the kids.) How would you translate this book?

Kids: We’d have to study and learn the foreign language, open the book, get a dictionary and translate the words into English.

Kids: Yes, if he took the cloth off the book and opened it.

Parents: What if Dad left the cloth on the book. Could Dad translate it?

Kids: No, because he wouldn’t see what was inside the book!

Parents: What if God helped Dad see what was inside the book without opening the book? Could God do that?

Parents: But is that how Dad or other scholars typically translate books? By covering them with a cloth and asking God to reveal the content inside?

Parents: Exactly. But this is how Joseph Smith translated. The Book of Mormon plates were typically covered with a cloth.

At this point, most people, including kids, are wondering why Joseph had to have the plates in the first place. Or even why Mormon and Moroni went to all the trouble of engraving the plates. Or why D&C 10 tells Joseph he has to translate the engravings. Or why Joseph and Oliver always said Joseph translated the plates using the Urim and Thummim that accompanied the plates.

Kids: So God helped him to know what was inside the book?

Parents: Yes. Now, was Joseph Smith a scholar? Did he know lots of foreign languages?

Parents: So how did Joseph Smith translate the Book of Mormon if he didn’t know or understand the language it was written in?

The kids might have read Joseph Smith - History 1:62, in which Joseph says he copied characters off the plates and translated some of them with the Urim and Thummim in December 1827-February 1828. This was before he dictated anything to Martin Harris.

In the part of the history omitted from JS-H, Joseph stated that Martin "returned again to my house about the twelfth of April, Eighteen hundred and twenty eight, and commenced writing for me while I translated from the plates."

In words as plain as can be, Joseph declared he could translate the characters and that he translated "from the plates." He never once said he read words that appeared on a seer stone that he found in a well, but this is what our revisionist scholars are teaching.

Parents: Right, but how?

Parents: Remember when you said “by the gift and power of God”? We’ll explain it. God gave Joseph Smith a special stone called the seer stone as well as two other special stones called the Urim and Thummim. These stones would shine with light, showing the words of the Book of Mormon in English. Urim and Thummim mean "light and truth" in Hebrew, a perfect name for stones that shine words of light and truth.

This is the tactic of confusing people by merging terms, as we've discussed before. In 1834, there was a sharp and clear distinction between the seer stone in a well, called a peep stone, and the Urim and Thummim that accompanied the plates. Modern revisionist historians have called both items the same name, but they have zero quotations from Joseph Smith to the effect that he merely read words that appeared on a stone in a hat.

If you were trying to read words of light, what would you do?

Kids: Maybe cover my head with a towel to block out the light so I could see the lighted words more easily.

Kids: I could put the stone into a hat to more easily see the words of light. We do the same thing when we are trying to look at pictures on your smartphone outside in the sunlight. We try to create darkness around the phone with our hands or baseball cap so that we can see the picture.

We then showed them an artistic rendition of Joseph Smith preparing to translate, created by Anthony Sweat, a Brigham Young University Church History and Doctrine professor and juried artist.

Parents: This picture shows how Joseph Smith brought forth the words of the Book of Mormon (we typically call it “translation”). Now, is this how Dad translates the Hebrew Bible? Is this how scholars ever translate? Is this how you’ll be taught to translate when you learn a foreign language?

Parents: So why did Joseph Smith translate that way?

Kids: (Thinking) Because Joseph Smith couldn’t translate in the normal way, and God wanted to prove that he made the Book of Mormon translation happen.

Parents: Good. Now another question. How hard would it be to translate a book from a foreign language that you didn’t know, and all you had to do was to read the words that appeared in English on a stone?

Kids: Not too hard.

Parents: That is essentially what God had Joseph Smith do, read words of light in English from the seer stone. But it was a lot of work spiritually for Joseph. He had to exercise righteousness and faith and trust in God. There was spiritual work and effort involved in the translation. God did a marvelous work and wonder to help Joseph Smith, who brought forth the Book of Mormon by reading words of light from specially prepared stones.

Parents: We know people who, when they learn that Joseph Smith was looking at a stone in a hat to translate, they don't believe it. They say things like, “That’s a silly way to translate. If that is what Joseph Smith did, I’m not going to believe that he is a prophet or that the Book of Mormon is the Word of God.”

Look at this rhetorical trick. Throughout the Church, youth are being taught that the peep stone-in-a-hat story is the truth, as opposed to what Joseph and Oliver consistently taught.

Some of these people even stop believing in Jesus and Heavenly Father because of this. Remember when Nephi built his boat to go to the Promised Land?

Parents: Did Nephi make his boat to impress ship builders or to make his brothers proud or to prove how amazing he was at making a boat?