Today, let's look at an example of how that LDS academic process operates to perpetuate M2C. 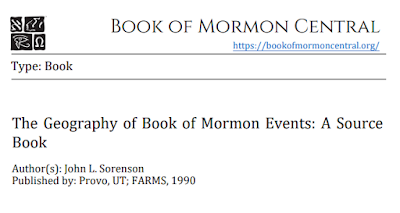 This is an important reference book, not only for the content, but even more for the implicit M2C bias throughout.

Here's a classic quotation, from page 10. Notice how this paragraph could be describing today's M2C citation cartel.

Original in blue, my comments in red.

Another factor clearly was the sheer smallness of the number of minds at work studying the Book of Mormon in any degree.

[There are fewer than 10 intellectuals who drive the entire M2C enterprise. They've hired fine young scholars to promote M2C on the Internet, but the hirelings contribute nothing original.]

For at least the first 50 years of the Church's existence, [just like the last 50 years] virtually everyone who thought in detail about and then put their thoughts in print on any gospel topic were few in number.

They were almost all known personally to each other and were concerned with unity, not alternative views. [The M2C citation cartel in a nutshell.]

There was no source of nor room for variant points of view, let alone criticism.

[The M2C citation cartel is notorious for censoring "variant" points of view, especially those that corroborate the teachings of the prophets about the New York Cumorah.]

No one would have thought of questioning Joseph Smith or whoever it was who indicated that "the ancient City of Manti" had once been located in Missouri (see Appendix A).

Today: The M2C citation cartel does nothing but question Joseph Smith and Oliver Cowdery. Except they don't merely question them; they expressly repudiate them.

This sentence rephrased for the current reality:

No one would think of questioning L.E. Hills or whoever it was who first indicated that "the real Hill Cumorah of Mormon 6:6" is located in Mexico.

(It is obvious enough nowadays ["obvious" is classic M2C closed-minded thinking] to Book of Mormon students [thanks to the academic cycle they're all brainwashed to accept the M2C interpretation of the text] that since Book of Mormon Manti was in the land southward and near the head of north-flowing river Sidon, [the M2C revision of the text] a location in Missouri is out of the question.)