Lewis and Clark and geographical areas

Yesterday was the 200th anniversary of the mysterious death of Meriwether Clark of the famous Lewis and Clark expedition. Some years ago I did some research on this topic so I was glad to see a nice article in the Deseret News about it:

The National Park Service has a great web page that features historical sites you can visit. I've been to several of them. Fort Clatsop is not far from where I live. 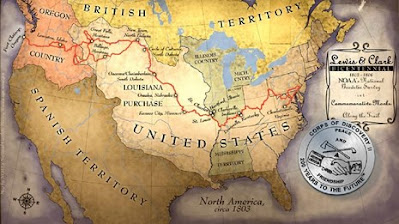 Lewis had a boat built in Pittsburgh that he sailed down the Ohio River to the confluence of the Ohio and Mississippi Rivers. That took about four weeks.

They wintered in the St. Louis area, then embarked in May 1804.

I mention all of this because it's not plausible to me to think that in 1,000 years, the Nephite civilization was confined to a "limited geography" in Mesoamerica. The idea that the Jaredites were confined to such a small area is even less plausible.

Compared with the M2C theory, I think the Book of Mormon was both larger and smaller; i.e., larger in territory and smaller in population.

Here is a rough comparison of the areas covered by M2C, the Bible, and my interpretation of the Book of Mormon as discussed in Moroni's America. Click images to enlarge.