On this blog we've discussed how the M2C citation cartel effectively censors alternative viewpoints about Book of Mormon geography/historicity. The cartel especially focuses on those who still believe what the prophets have taught about the New York Cumorah.

Because the M2C citation cartel (BYU Studies, the Interpreter, FairMormon, Book of Mormon Central, Meridian Magazine, etc.) has created a news silo that dominates LDS culture, most Church members today have no idea what the prophets have taught about the New York Cumorah.

This censorship is demonstrated in the mark of M2C, as we've seen. (More examples coming.)

A real-time example of similar censorship is taking place in the United States right now.

Ground News is a web-based service that shows which media covers which stories. For example, they show that left-leaning media has a blackout on news about the Bobulinski interview and related information. 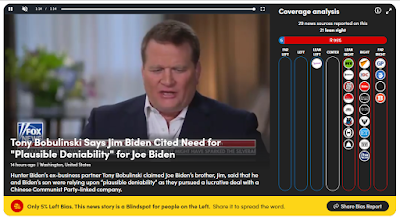 (Click to enlarge)
https://ground.news/article/8901104b-285e-418d-9adc-34716499259e/news?utm_source=tw_bia&utm_medium=tw_bia&utm_campaign=v3
Consequently, people who only watch CNN, MSNBC, CBS, NBC, etc. don't learn about this information. Their news silos prevent them from making informed decisions.
This is reflected in a survey about what people think of Joe Biden's involvement with overseas business deals. 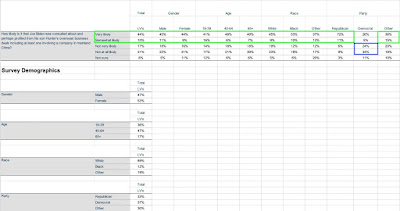 Consequently, members of the Church are unable to make informed decisions about Book of Mormon geography and historicity.

The M2C news silo approach is destructive not only because it contradicts basic principles of openness, transparency, and even scholarly analysis, but because it misleads people into thinking M2C is officially approved by the Church.

But it is not.