In recent presentations I have discussed the importance of keeping things in perspective. The topic of Book of Mormon geography is more interesting and important to some people than it is to others.

If it's important to you, great. If it's not, that's great, also.

People can be faithful, dedicated members of the Church regardless of what they believe.

I showed this graphic: 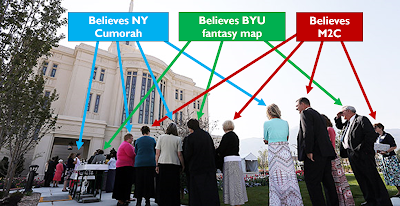 Some people (particularly M2C advocates) are so insecure about their belief in M2C that they are obsessed with running around on the Internet trying to prove why the prophets have been wrong about the New York Cumorah.

They're like Maitre Hauchecorne in Guy de Maupassant's short story, "A Piece of String."

Readers of this blog know that all we care about is helping people make informed decisions. Unlike the M2C citation cartel and their employees, we don't censor information. We encourage people to read the publications of the M2C citation cartel and see for themselves. We think the more information a person has, the better informed that person's decisions.

We want everyone to know there is a legitimate, evidence-supported interpretation of the Book of Mormon that corroborates the teachings of the prophets about the New York Cumorah.

The M2C philosophy instead promotes M2C or bust. That's why Book of Mormon Central censors anything that contradicts or even questions M2C. We don't want those who find M2C implausible to reject the Book of Mormon just because a particular group of LDS scholars insist M2C is the only plausible explanation.

We'll continue to discuss issues related to Book of Mormon geography on this blog. I noticed recently that I have 98 unpublished posts on this blog alone. I could schedule them at the rate of 2 per week and take most of the year.

By now, most readers here realize that we all make decisions about what to believe and then use bias confirmation to support those decisions. That's how we end up with the two basic categories of belief about Book of Mormon geography.

(i) Some people accept what the prophets have taught about Cumorah and seek to support those teachings.

(ii) Other people reject what the prophets have taught about Cumorah and seek to repudiate those teachings with alternative theories. M2C is the best-known of these theories, but there are several others.

Either way is fine with me. Obviously, I prefer (i), but for many years I believed (ii). I've been a faithful Latter-day Saint throughout.

Those who know me well know that I've long been much more interested in what Joseph Smith called our "greatest object." I'm pivoting more to that topic.