The academic cycle: Jakeman and the Source Book 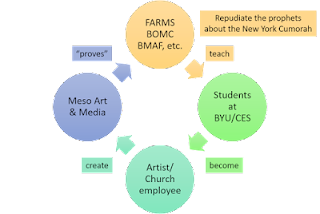 The Source Book we discussed yesterday has a helpful history of Book of Mormon geography that I encourage everyone to read.

One of the most influential scholars in this field was M. Wells Jakeman, who began teaching at BYU in 1946. The Source Book suggests that Jakeman was probably influenced by RLDS scholar L.E. Hills, whose 1917 map showed Cumorah in Mexico.

Jakeman's most significant contribution was through his students. Over a period of three decades he furnished stimulation to many hundreds of young people who passed through his courses at BYU. As they spread throughout the Church, they carried with them assurance that Mesoamerica was the scene of Book of Mormon events and that traditions from that area strikingly confirmed scripture.

One of Jakeman's students was John L. Sorenson, author of the Source Book. As I've mentioned before, Sorenson is an excellent scholar and a great guy. I completely disagree with his conclusions, but I also completely respect his scholarly focus on a real-world setting for the Book of Mormon. My own interest in the historicity of the Book of Mormon was prompted partly by a class I took from Sorenson at BYU, and I expressed my respect for him in the opening pages of Moroni's America.

Brother Sorenson's explanation of Jakeman's contributions on page 28 shows how deeply he was influenced by Jakeman:

(1) the settling, for many people, of the basic "where?" of the geography of Book of Mormon events; those who studied systematically with him ended up with no question but that the entire story took place in Mesoamerica and related significantly to what can be learned from the native Mesoamerican traditions; and,

[This is the tell for indoctrination, brainwashing, imprinting, or whatever else you want to call it: students ended up with "no question" that M2C was the answer and then spent their careers confirming that bias. Ordinarily, we expect more educated people to have more open minds, but as we've been discussing lately on this blog, studies and experience show us that often more educated people have more closed minds. Members and employees of the M2C citation cartel are one of the best examples of closed minds we'll ever see.]

(2) the idea that the ultimate "test" for correlating the Book of Mormon in space and time with one particular set of Mesoamerican sites and localities would involve comprehensive study of the ancient world, not just geography; ultimately traditions, archaeology, physical anthropology and linguistics had to combine.

[Notice again that the outcome is a given: Jakeman's students focused on "correlating" the text with Mesoamerica, the only question being which "particular set of Mesoamerican sites and localities" has the closest fit. This process involves the relevant sciences, but the predetermined outcome also requires revision of the text through the process of reinterpreting terms to "fit" Mesoamerica. That's how M2C ended up with horse = tapir, tower = massive stone pyramid, etc.]

He [Jakeman] was the first student of the geography of Book of Mormon events to gain professional standing as an "archaeologist" (though he did virtually no digging personally) and to see that geography must connect with cultural contexts through meticulous scholarship.

This was the tipping point in the scholars vs. prophets dialectic. "Meticulous scholarship" replaced consideration of the teachings of the prophets. As you read the Source Book, you see a persistent conflation of the New York Cumorah with the "hemispheric model," as if they are the same. Because the "hemispheric model" was inconsistent with the text, the thinking goes, the New York Cumorah must also be inconsistent. In my view, that's not a rational argument.

The Source Book proceeds to explain how the intellectuals rationalized narrowing the possible locations for the Book of Mormon. Continuing on page 28.

By the sixties the increasing number of people working with the geography question had settled on Mesoamerica as the only plausible candidate area in the New World. There were rare exceptions with anomalous models located in Peru, Nicaragua, Costa Rica, "Central America," and so on, but certain basic issues appeared to be settled for those who had paid close attention:

[There it is: "basic issues appeared to be settled" means the academic minds were completely closed. They still are.]

(1) the area in which the story took place was far smaller than a continent,

[Note that neither Joseph nor Oliver every said otherwise. The hemispheric model was set out by Orson and Parley Pratt. For example, the 1842 Wentworth letter was based on a prior missionary pamphlet written by Orson Pratt. Pratt had written at length about the indigenous inhabitants of Central America. Joseph deleted all of that and replaced it with the statement that "The remnant are the Indians that now inhabit this country."

As we've discussed before, if you look up the Wentworth letter, don't refer to the lesson manual Teachings of the Presidents of the Church: Joseph Smith. The M2C-influenced Curriculum Committee edited the Wentworth letter to omit what Joseph taught about the "Indians that now inhabit this country."

It's worth looking at the manual to see the ellipses where they omitted Joseph's teachings. This is ironic because Joseph began the letter by asking Mr. Wentworth "that he publish the account entire, ungarnished, and without misrepresentation." Joseph should have been more concerned about the future Curriculum Committee and its M2C orientation.

Instead, to see the actual Wentworth letter, refer directly to the Joseph Smith Papers or an older article in the Ensign that published the letter in full before the M2C cartel could get to it:

I spent some time discussing this because once you see this deliberate editing of the Wentworth letter, you can understand what I've been saying about the Saints book and other materials that have been revising Church history to accommodate M2C. It's a pervasive problem, not confined to the M2C citation cartel. Because these M2C intellectuals have been convinced that M2C is the only plausible explanation for the Book of Mormon, young and new LDS members will never learn what the prophets have taught about the New York Cumorah.]

(2) the hill in New York could not be the scene of the final battle because of statements in the text itself, and

[This is a prime example of interpreting the text to fit M2C. Anyone can read the text and see that it does not exclude the New York Cumorah. To interpret the text this way, the M2C citation cartel has to outright reject the direct, unambiguous statements from Joseph Smith (quoted by his mother), Oliver Cowdery, Martin Harris, David Whitmer, and all of Joseph's contemporaries and successors in Church leadership who have ever addressed the question.]

(3) only some place within the high civilization area called Mesoamerica could qualify.

[M2C advocates have concocted the "high civilization" framing because it is necessary to justify M2C. Ironically, it's exactly the same mistake that the Pratt brothers made when they developed their hemispheric model.]

And finally for today, we see the results of the academic cycle:

Meanwhile the Church membership in general still held a vague idea of a hemispheric model, although they thought little about it under a virtual ban on discussion of the topic in Church manuals and in the education system. Yet thousands of readers and people who had studied under Jakeman or his students scattered throughout the Church actually held the Mesoamerican view.

These M2C students are in positions of influence throughout the Church. That's why everything you see or read promotes M2C implicitly or explicitly.