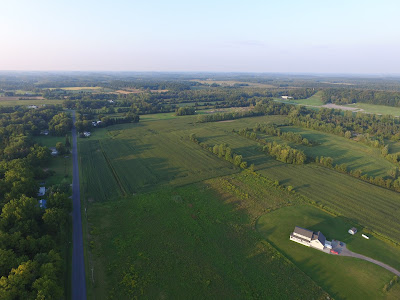 This is the photo that we used for the cover of the book. I flew over the area with my drone. The Hill Cumorah is in the upper right of the photo. The light green triangle is where the annual pageant takes place. At the peak, just to the left, is the statue of Moroni. The white building on the left is the Visitors Center.

Yesterday I listed a few of the things covered in the book. Here are some more items of interest it contains.

1. Oliver's letters are the only source for many details about the early events of the Restoration.

2. Oliver's Letter I is excerpted in the Pearl of Great Price.

3. Joseph had his scribes copy Oliver's letters into his personal history.

5. Oliver describes Moroni by saying "the stature of this personage was a little above the common size of men in this age."

6. Oliver says Moroni's "garment was perfectly white, and had the appearance of being without seam."

7. Oliver says Moroni "said this history was written and deposited not far from that place."

8. On April 3, 1836, just a few months after Oliver published Letter VII and Joseph's scribes copied it into Joseph's personal history, Moses, Elias, Elijah, and the Lord Himself appeared to Joseph and Oliver in the Kirtland temple. "Behold, your sins are forgiven you; you are clean before me; therefore, lift up your heads and rejoice." D&C 110:5.

9. Oliver remained a faithful witness of the Book of Mormon throughout his life.