I haven't posted for a while due to other commitments, and I have a big backlog of material. I want to focus on Cumorah some more, but first I have to point out more material from FairMormon that is straight out of George Orwell's dystopian novel, 1984.

As a refresher, this novel the one that brought us Big Brother and NEWSPEAK, which is a perversion of language to obscure meaning. The three most famous examples from the novel are these:
War is peace
Freedom is slavery
Ignorance is strength

FairMormon has an awesome display of Orwellian Newspeak in a youtube video they produced. Here's a screen shot that says it all: 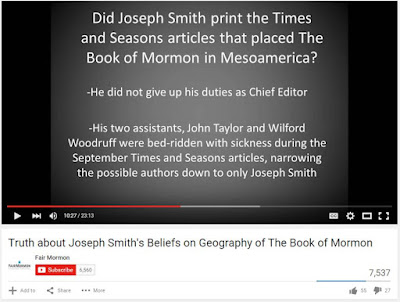 The title of this video appears under the screen: "Truth about Joseph Smith's Beliefs on Geography of The Book of Mormon." For those who don't know the history (or who have learned history only from CES and/or BYU), the statement in this screen capture is laughably false, which is what makes the title of the video Orwellian Newspeak.

In fact, Joseph Smith was the editor in name only. (No one was ever identified as "Chief Editor." This is a term invented by FairMormon.) There is zero evidence that Joseph had any editorial involvement with the Times and Seasons after June 1842 (and even that is questionable at best).

The video does correctly note that in September 1842, Taylor and Woodruff were sick and could neither write nor edit nor publish the newspaper. However, in September, Joseph Smith sent an epistle to the Times and Seasons for publication. (This letter became D&C 127). The FairMormon group want you to believe Joseph sent the epistle to himself.

The other absurdity here is that the Times and Seasons contains material from multiple authors besides Taylor, Woodruff and Joseph Smith. There were other people working in the printing shop, and, as I've pointed out, the Wasp was published from the same shop. William Smith and W.W. Phelps were working on both the Wasp and the Times and Seasons, but FairMormon keeps those facts from their readers and viewers because they want you to believe Joseph Smith wrote anonymous articles.

Much, if not most, of what was published in the Times and Seasons was mailed to the newspaper or extracted from other sources. Joseph actually signed the few statements he wrote so people would know they were from him. The articles FairMormon refers to in this video were unsigned. FairMormon knows this, but they seek to mislead readers by pretending, in an Orwellian way, that only Joseph could have written these articles.

You have to give FairMormon credit, though; they promulgate their Orwellian Newspeak anonymously themselves. Orwell would be proud. FairMormon publishes articles on its web page about a variety of topics, but most of them are unsigned. We have no idea who created this video, for example. We have no more idea about who created this video than FairMormon does about who wrote the articles they want you to believe are evidence to prove the Mesoamerican theory.

One thing we do know about the contributors to FairMormon; they're not telling the truth, at least regarding Church history and Book of Mormon geography issues.

I'll post more examples in the next two weeks.


For those who want to see how thoroughly FairMormon seeks to mislead viewers, watch the whole thing: https://www.youtube.com/watch?v=6rsyAExrNNc