Recently I posted about Brother John Clark's article in the Journal of Book of Mormon Studies. This is the one Brother Gardner cited as containing "the reasons that the New York hill could not have been the location of the final Nephite battle." 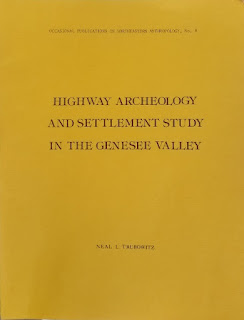 Brother Clark cited a report from an archaeological survey conducted before highway construction in the Genesee Valley of New York in the 1970s. Curious, I obtained a copy of the report. Not surprisingly, I found some things readers of this blog might be interested in.

Brother Clark's long citation (footnote 9) ends with this sentence: "This implies that a population decline took place during the Middle Woodland Period." (The Middle Woodland Period, as defined in the report, is 500 BC-AD 1000.) However, Brother Clark omits the final sentence from the original paragraph, which is this: "At present there is no apparent explanation for such a decline."

Had Brother Clark removed his Mesoamerican lenses, he might have seen the connection between the final war between the Nephites and Lamanites in the area and the "unexplained" decline in population in western New York.

The report also notes that "Mortuary ceremonialism declined during the Late Woodland Period, as shown by the lack of grave goods or burial mounds following the Middle Woodland cultures." These burial practices were "patterned after those found in Ohio (Hopewell Tradition)." In Book of Mormon terms, Ohio was Bountiful, the Hopewell were the Nephites. If we read the text, we would expect the Nephite traditions to decline after they were vanquished by the Lamanites.

[Note: The term Hopewell comes from the last name of the man who owned the property upon which a particular mound was excavated. Had his last name been Nephi instead of Hopewell, archaeologists would be referring to these people as the Nephi culture.]
_________________

"For the nearby Genesee Valley in New York, Neal L. Trubowitz gives detailed information from an intensive survey carried out in conjunction with the construction of a recent highway.8 For the wide strip of land involved, there is 100 percent coverage, so the information for relative changes in occupation is unusually good, as such things go in archaeology."

Trubowitz himself has a different perspective. He first explains that the report is his PhD dissertation. Then he notes that when he returned for a visit, "I found that the entire Genesee Expressway had gone to construction since I left, and that a major proportion of the archaeological sites identified in our research, notably the concentration of sites at the junction of the Genesee River with Canaseraga Creek, had been destroyed by that construction without the benefit of any research beyond the work noted in this study.

"The history of highway salvage archaeology peculiar to New York, in combination with the political power structure within the state government at that time, contributed to the loss of many sites in the Genesee Valley that doubtless were eligible for nomination to the National Register of Historic Places and deserved further research. These sites cannot be replaced and their loss represents a serious depletion of of the archaeological record. Yet, the Genesee Expressway investigations still represent a quantum leap in quality over the highway archaeological research that was possible before 1973 in New York. At least with this expressway, archaeologists were able to undertake systematic reconnaissance and some minimal test excavations, as compared to the almost nonexistent levels of research that were done on older major highways."

To Brother Clark, Trubowitz's dissertation represents detailed information of an intense survey of 100% coverage of the area. To Trubowitz himself, though, there were only "minimal test excavations" followed by destruction of "the concentration of sites," which cannot be replaced. Trubowitz says "their loss represents a serious depletion of the archaeological record," to which Brother Clark responds, "Possibilities and probabilities of destroyed evidence have become an excuse for avoiding serious archaeological research altogether."
___________________

Trubowitz also notes that while Ritchie, the other author Brother Clark cited, "did investigate mounds and other non-Seneca sites, very little organized research on cultures earlier than Late Woodland Period had been undertaken" prior to the highway study. He also notes that "Practically every landowner who has any close connection with his or her property (farming, etc.) has a collection ranging from a few stray projectile points to thousands of artifacts. Many collectors are known to have found sites which have not been recorded at any institution. Some of the earlier private collections have been broken up at auctions and are no longer available to researchers... It would take the lifetime of a number of investigators to track down all the extant collections, and any survey of these collections would suffer from the collecting biases of those people who accumulated them."

Yet, based on the Trubowitz study, Brother Clark reaches this conclusion: "sufficient information is available for the surrounding regions to make a critical assessment. Mormon’s hill and Moroni’s hill are not one and the same... Archaeologically speaking, it is a clean hill. No artifacts, no walls, no trenches, no arrowheads. The area immediately surrounding the hill is similarly clean."

The author of the study Brother Clark cites says there are innumerable landowners who have collections that number in the thousands of artifacts, but Brother Clark doesn't mention that. Instead, he tells his readers that there are no artifacts.

As I say, reviewing the publications of the citation cartel is a lot of fun.

I invite anyone with the time and interest to read this stuff for yourself. You'll be amazed.