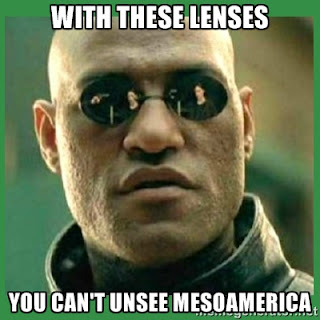 The "fun" series looks at what happens when people read the Book of Mormon through the Mesoamerican lens and "can't unsee" Mesoamerica as a result. Some join the citation cartel and suppress alternative views.

I'm happy for those whose testimonies of the Book of Mormon are solid regardless of the physical evidence, the geography, etc. I'm also happy for those whose testimonies are stronger because of their belief in the Mesoamerican theory. But many people have different spiritual gifts and are not satisfied by that theory. They need--and even more, they deserve--a fact-based alternative that supports what Joseph Smith, Oliver Cowdery, and David Whitmer said and wrote. It is for them that I write this blog.

Obviously, everyone wears lenses of one sort or another; it takes real effort to remove the ones you're used to and try on different eyeglasses.

People ask me all the time about anti-Mormon, former Mormon, atheist, evangelical and other arguments against the Church and religion in general. Those are all lenses through which people see the world. I've addressed some of those, and will publish more about that eventually, but in my view, it's a futile endeavor to respond to critics when people within the Church can't even agree on such a basic point as the location of the Hill Cumorah.

Certainly there can be differences of opinion about how to interpret facts, but there is no excuse for ignoring facts. As I unpack the Mesoamerican arguments, I hope to encourage everyone to take a fresh look at all the facts, and then draw reasonable inferences from them. Through this process, greater unity may develop.

When I wore the Mesoamerican lenses, especially as they were crafted by my education at BYU and by reading FARMS, etc., I thought I was seeing the text more clearly, but in retrospect, it was an illusion. I found myself reading into the text things that weren't there, such as headwaters, tapirs, a north-flowing Sidon, etc. I was seeing "correspondences" between Nephite and Mayan cultures that were actually common human activities found in many cultures from around the world. Some time ago I removed the Mesoamerican lenses, and now the text is far clearer and more meaningful to me. Best of all, the North American setting reconciles Church history, the text, and the sciences.

So if you're wearing Mesoamerican lenses and you're happy, fine. But if you're a participate in the citation cartel, please stop ignoring, distorting and suppressing important facts about Church history and North American archaeology, anthropology, geology, etc. Please stop writing logical fallacies. Please correct the errors I point out in this blog. And most of all, please allow everyone, Church members, former members, investigators, and those who know nothing about the Book of Mormon, to have access to the North American alternative to the Mesoamerican theory.

I think that's a far healthier approach than trying to put Mesoamerican lenses on everyone.
Posted by jonathan3d at 12:02 PM