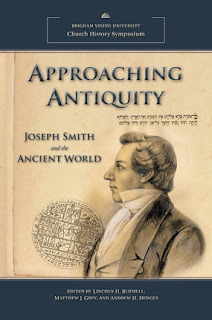 A few months ago, in 2015, Deseret Book published a book titled Approaching Antiquity: Joseph Smith and the Ancient World. It's a collection of papers presented at the 2013 Church History Symposium at BYU. You can watch the presentations here. There is some excellent material in the book, and I recommend it.

The title, of course, refers to how Joseph approached antiquity, but it has a double-entendre because it contains material that is already out of date.

This is the problem with books now. When I had the first manuscript of Lost City of Zarahemla, I met with a well-known publisher of LDS books and was told it would take 18 months to go through the publication process. IOW, had I gone with that publisher, the book would still not be out.

Instead, that book is already in the second edition. Letter VII has been out for eight months. Moroni's America for five months, Brought to Light one month (although the final version won't be released for another week or so), The Editors will be out in May, and Moroni's History will be out in June.

Besides these books, I've published hundreds of blog posts on the topic--such as this one.

In a sense, this is all easy: the citation cartel has provided an abundance of material. It's just a question of how often I click the Publish button on the posts I have already written or discuss the hundreds of notes I've made.

I'm told that more than one post a day is a waste, that one a week is ideal, etc. However, this blog is really for my own use, something I can refer to wherever I am if I get an idea or need to get a reference. I'm glad thousands of viewers read along, but even if no one did, I'd be posting here.

People want me to organize the blogs by subject matter and publish them in a book. Maybe I will some day. (I do have a draft manuscript titled Because of this Theory that focuses on the greatest hits from the citation cartel, but I'm more interested in collaboration than confrontation, so I don't think I'll publish that one). In the meantime, the search function works quite well. I can find everything I need in the archives, and I'm sure readers can too.

What I'm saying is there is an overabundance of material showing 1) the Mesoamerican theory contradicts fundamental criteria and 2) the North American theory integrates all the available evidence. The open question is how best to present it, if at all. It would be far better to discuss all of this privately, as I've tried to do without success. With few exceptions, the citation cartel won't sit down and discuss these issues. Why should they? They have decades of publications in the archives and they've achieved complete dominance of the LDS infrastructure, including BYU, CES, Church media, etc. Their position is understandable, but I don't think it's defensible, so I keep blogging.

Here's the example that prompted this post. Chapter 6 in Approaching Antiquity is an article titled "Joseph Smith,Central American Ruins, and the Book of Mormon." (For unexplained reasons, Andrew Hedges' response is not included in the book, but you can watch it on the video starting about minute 24).

The chapter contains enticing claims, such as this one on p. 143: "he [Joseph Smith] read and enjoyed the volumes by Stephens and Catherwood, shared the excitement these discoveries generated among his friends and associates, and believed that they contained information both consistent with and supportive of the Book of Mormon." [7]

Eager to see the evidence for this claim, I turned to footnote 7. It reads, "There is no indication that Joseph Smith considered his ideas about Central America and the Book of Mormon to be revelatory."

Besides being a non sequitur, this footnote does nothing to support the claim in the article. Apparently that claim is based entirely on the anonymous letter to Bernhisel dated 16 November 1841 (which the article incorrectly claims John Taylor wrote). As the Joseph Smith Papers show, no one knows who wrote that brief thank-you note. The handwriting remains unidentified and the circumstances under which it was written a mystery.

In the upcoming book The Editors: Joseph, William, and Don Carlos Smith, I have an entire chapter on the Bernhisel letter that demonstrates, I think pretty convincingly, that Wilford Woodruff drafted that letter. I submitted it to Book of Mormon Central as a stand-alone piece. If they don't publish it, I'll put it on my blogs. But some of that material was in Lost City already. The point here is, American Antiquities was published months after Lost City and it doesn't even respond to the historical facts presented there, let alone more recently discovered material.

Consequently, the entire book industry is itself "approaching antiquity."

That said, I will continue to publish the books because they remain the best way to present information in a coherent format that can be shared, annotated, discussed, debated, etc. But we all need to recognize, thanks to this example from Approaching Antiquity, that books are a product of their times. Although it was published in 2015, Approaching Antiquity is a product of 2013--ancient history by today's standards.

Just to be clear, I'm not criticizing books generally or Approaching Antiquity specifically. It's a wonderful resource. But I caution people not to believe everything they read. You can trust if you want, but be sure to verify.