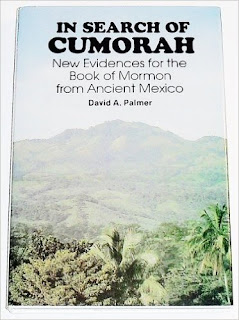 I previously discussed Brother Palmer's book In Search of Cumorah. This is such a fundamental text for the Mesoamerican seers that it is quoted with approval by both Sorenson in Mormon's Codex and Gardner in Traditions of the Fathers.

The citation cartel is oblivious to the following fun aspects of Palmer's book.

1. On p. 20 of the 1981 edition, Palmer writes "There is no record of Moroni having told Joseph Smith that the place where the abridgment was buried was Cumorah, or that the hill was once a great battleground. If this had been the place of those great battles, it would be rather surprising that it was not mentioned. We have only the scantiest of inferences that Joseph ever called the hill "Cumorah." (D&C 128:20). However, he does not appear to have corrected Oliver Cowdery, who may have been the one to first name the New York hill "Cumorah." (Cowdery, 1835)."

Every sentence here is great fun.

First sentence: we have a record of Joseph referring to the hill as Cumorah even before he got the plates (in his mother's history). Who else but Moroni could have told him this? Then we have David Whitmer's recollection of hearing the name Cumorah in 1829 from a heavenly messenger (in the presence of Joseph and Oliver) before he even read the manuscript (and before Joseph and Oliver had even finished the translation). To the citation cartel, though, these don't count as "records" because
they contradict their thesis that the location of Cumorah was never revealed.

Second sentence: Brother Palmer has a good point that it would be surprising if the New York location was not mentioned; but since we have accounts that Moroni did mention it, what is actually surprising is that Palmer ignores the records of Joseph and 2 of the 3 witnesses knowing about Cumorah even before the text was published.

Third sentence: It's fun to read that the canonized scriptures are "scanty inferences." D&C 128:20 was written in the context of universal knowledge among Mormons of the day that the New York hill was Cumorah. Oliver's Letter VII made this as clear as possible. It was published in the Messenger and Advocate in 1835, in the Gospel Reflector in 1841, and in the Times and Seasons in 1841. No Mormon alive during Joseph's lifetime could have not known what he meant by Cumorah when he wrote this letter to the Church. There was such demand for Oliver's letters that they were republished in England as a separate pamphlet in 1844.

Fourth sentence: You have to love this: Joseph "does not appear to have corrected Oliver Cowdery." Why would he correct Oliver when he helped him write the letters that identified Cumorah in New York, and then had his scribes copy those letters into his own journal as part of his history? Far from correcting him, he embraced these letters!
____________________________ 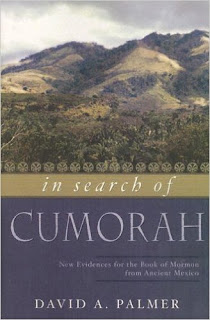 In fairness, Palmer revised his book a little in later editions. In the 1999 edition (7th Printing, Feb. 2005), the first two sentences are the same, but the third and fourth are different: "The first record we have that identifies the hill in New York with the last Nephite and Jaredite battleground was written by Oliver Cowdery (referencing Letter VII in the Messenger and Advocate). In a revelation given seven years later there was a hint of a possible connection. "And again, what do we hear? Glad tidings from Cumorah! Moroni, an angel from heaven declaring the fulfillment of the prophets--the book to be revealed." (DC 128:20).

Obviously, this isn't much of an improvement. Palmer ignores the reprinting of Letter VII in the Times and Seasons and Gospel Reflector, and in Orson Pratt's pamphlet. He tells readers there was a 7-year gap between Letter VII and D&C 128:20, instead of the "gap" of a year and a half in the Times and Seasons itself, or six months if you count the Wentworth letter. Issues of the Times and Seasons and Gospel Reflector containing Letter VII were bound and on sale in Nauvoo right through the publication of D&C 128. D&C 128 is hardly a "hint of a possible connection." With the full historical context, there is no doubt that in D&C 128. Joseph was referring to the New York hill.

Another fun part of this book is on pages 84-86 when he discussed Ritchie's book on New York archaeology. I'm guessing this is where John Clark got the idea to cite Ritchie. Like Clark after him, Palmer concludes Cumorah cannot be in New York because there were no large cities dating to Book of Mormon times near Cumorah. Of course, the text doesn't say the Nephites had large cities near Cumorah, so Ritchie's findings actually corroborate the Book of Mormon text. Apparently the Mesoamerican translation describes large Nephite cities near Cumorah though.

Another link between Palmer and Clark is on page 21. Palmer writes, "A 'two-Cumorah' theory is thus more appropriate, since records were hidden in both Mormon's Cumorah and Moroni's Cumorah. Therefore, it matters little whether it was Joseph Smith or one of his associates who called the hill in New York 'Cumorah.'"

John Clark, in the article I had fun with here, wrote "Mormon’s hill and Moroni’s hill are not one and the same."

Of course, both of these authors are misleading their readers with this false distinction between Mormon's hill and Moroni's hill. In Letter VII, Oliver Cowdery unequivocally declared that it was a fact that the final battles took place in the valley west of the Hill Cumorah in New York (Mormon's Cumorah)--the same hill from which Joseph retrieved the plates (Moroni's Cumorah).

Mesoamerican seers are free to say Oliver Cowdery was mistaken (or deceived, or even dishonest, or whatever excuse they're giving lately); they are even free to misinform their readers about what he wrote. But when they do, I'll point it out here.

A third fun aspect of this book is its treatment of the book by McGavin and Bean titled Book of Mormon Archaeology. On p. 81, Brother Palmer writes, "McGavin and Bean presented significant amounts of data on antiquities of New York state in support of their position. From that I conclude that there msut have indeed been some wars in western New York among the Indians. I will also grant that there might have been scores or even hundreds of drumlin hills with stoneworks that might have served as fortifications.

"What I am not prepared to accept is an age for those remains going back to Nephite times, much less Jaredite times. McGavin and Bean (1949) did not have the advantage of modern dating techniques when they published. Radiocarbon dating was just around the corner, but in its absence even the best of the archaeologists made gross errors in assigning dates to early American cultures. Today, we are in a much better position to evaluate the archaeological data from the state of New York. In doing so, we will first look at the archaeology of the eastern half of the United States, and then will examine the specifics of archaeology in New York to see whether there is consistency with the Book of Mormon model."

This is fun first, because Palmer at least recognizes he's "not prepared to accept" data that conflicts with his preferred theory, and second because Palmer doesn't discuss a single one of the specific sites mentioned by McGavin and Bean. He cites not a single radiocarbon date from any of those sites. Instead, he generalizes from Ritchie's own generalizations.

McGavin and Bean quoted excerpts from several books by early explorers who personally witnessed the extensive ancient forts the Europeans found when they arrived in western New York. These were so well known, and so ancient (as shown by trees growing over them for hundreds of years), that critics contemporary with Joseph Smith claimed he merely used well-known Indian legends and common knowledge of antiquities in the area to write the Book of Mormon. (In fact, one of the motivations for looking at Mesoamerica was to respond to the early critics, some of whom said Joseph just related well-known legends and others who said the Indians were too savage to have ever lived the way the text described.)

If Palmer and other Mesoamerican advocates want to cite radiocarbon data to refute the New York Cumorah, they should at least be specific and relate the dating of the ancient fortifications identified by the French (the first Europeans to arrive there) and other explorers.