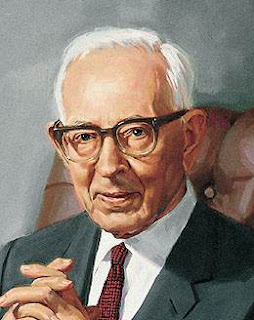 One of my favorite arguments from our friends who advocate a Mesoamerican setting for the Book of Mormon is their approach to Joseph Fielding Smith (JFS).

I mention Joseph Fielding Smith because he was the last President of the Quorum of the Twelve to specifically address Book of Mormon geography.

He emphatically rejected the two-Cumorahs theory that most current LDS scholars and educators embrace.

JFS was clear, but LDS scholars rejected him--twice--and they continue to reject him today.

The two-Cumorahs theory is the basic premise behind the Mesoamerican geography that you have been taught your whole life by BYU/CES and Church media.

In my view, of course, that theory is false. It was developed by RLDS scholars in the 1920s and embraced by LDS scholars at BYU over the objection of Joseph Fielding Smith.

These scholars know Joseph Fielding Smith explicitly rejected their two-Cumorahs theory, as I've discussed on this blog many times.

But they don't want ordinary members to know that.

So, for example, on FairMormon they don't even tell readers what Joseph Fielding Smith actually had to say. Instead, they quote 30-year-old hearsay to justify their rejection of what he said.

Here's a fun experiment you can try.

Ask your BYU/CES teacher or your ward's Mesoamerican advocate what he/she thinks of Joseph Fielding Smith.

Remind them that he said the two-Cumorahs theory (the theory that the "real" Cumorah is in Southern Mexico) was false and would cause members to become confused and disturbed in their faith in the Book of Mormon.

(As an aside, that has proven to be a prophetic statement, as evidenced by any number of anti-Mormon or former Mormon blogs.)

If they have Mesomania, this is what your Mesoamerican advocate will tell you about Joseph Fielding Smith:

1) he didn't know what he was talking about and/or
2) he once said man would not land on the moon.

They may not even know that President Smith met with the Apollo astronauts and said he was wrong for having said men would not land on the moon. JFS readily acknowledged mistakes he had made when giving his opinions on various topics.

Your BYU/CES teacher might refer you to FairMormon or one of the other so-called scholarly sites that promote Mesoamerica.

But don't let them avoid the question.

It really boils down to a simple choice: 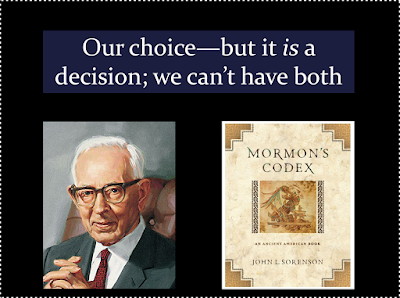 Or, to be even more clear: 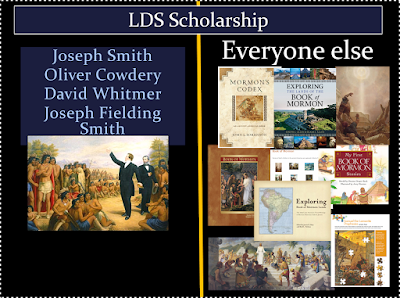 You might come across a BYU/CES scholar, or ward Mesoamerican advocate, who adopts the FairMormon hearsay approach that consists of this:

JFS said people can believe whatever they want.
Therefore, JFS changed his mind on the topic.

You don't have to go to law school to see the logical fallacy of that reasoning.

What is an Apostle supposed to do when he sets forth a clear, unambiguous position but the LDS scholars reject what he teaches?

How about when he becomes President of the Quorum of the Twelve and reiterates his position, but the LDS scholars still reject what he teaches?

Our own Article of Faith 11 teaches:

Joseph Fielding Smith couldn't tell people what they must think without violating this Article of Faith. He simply declared the truth and let people decide whether or not to accept it.

Joseph and Oliver did the same thing with Letter VII.

Just because LDS scholars have chosen to reject Letter VII and Joseph Fielding Smith (and so much more) doesn't mean you have to.

Just make sure it's an informed choice.