More prophets and apostles for LDS scholars to reject

Current LDS scholars and educators who teach a Mesoamerican setting (or a Baja, Panama, Peru, or even a hypothetical or abstract setting) are rejecting every prophet and apostle who has ever addressed the location of Cumorah.

This scholarly approach is astonishing and not well known among active members of the Church, but it is well known among detractors. It's a major cause of confusion and loss of faith, just as Joseph Fielding Smith warned.

I'm curious what the apostles and prophets would have to say to convince these LDS scholars and educators to change their minds about Cumorah and accept the New York setting, once and for all.

Seriously, this situation reminds me of the children of Israel rejecting their prophets.

I've pointed out many times that modern LDS scholars and educators reject not only Oliver Cowdery's Letter VII, but also Joseph Fielding Smith's warnings about the "two-Cumorahs" theory. You can see this for yourself in their publications (including on FairMormon, here, where the display of sophistry is breathtaking).

It's one thing to say the Church has no official position on Book of Mormon geography, and quite another to say that every latter-day prophet and apostle who has addressed the location of Cumorah was wrong.

There is plenty of room for discussion about Book of Mormon geography beyond Cumorah, but the Cumorah pin has been firmly placed in New York from the beginning through at least 1978.

I've discussed this on my youtube channel, as well.

Joseph Fielding Smith first made his warning in the 1930s, about the time LDS scholars were embracing the idea that the "real Cumorah" of Mormon 6:6 was in southern Mexico.

He repeated his warning in the 1950s when we was President of the Quorum of the Twelve.

No matter. The LDS scholars say he didn't know what he was talking about. As recently as last week, they continue to take this position.

In other words, if you (or your children or grandchildren) are being educated at a BYU campus or by CES and the topic of Book of Mormon geography comes up, they will almost certainly be taught that Cumorah is not really in New York, that Oliver Cowdery was speculating and lying, and that Joseph Fielding Smith didn't know what he was talking about.

I've discussed that more than enough on this blog. You all know this by now.

When Orson Pratt added the footnotes to the Book of Mormon in the 1879 edition, he correctly noted that the locations of Zarahemla, Lehi's landing, and other sites were not known, but were believed or thought to be in the places he mentioned.

Except he declared unequivocally that Cumorah was in New York. This is consistent with what Joseph Smith, Oliver Cowdery, David Whitmer, and others taught from the outset.

Our LDS scholars are not only rejecting Joseph Smith and his contemporaries, along with Joseph Fielding Smith. 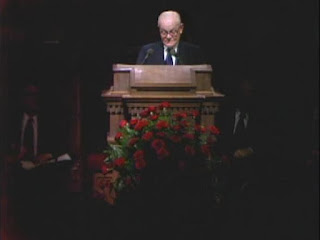 President Marion G. Romney. In the October 1975 General Conference, Marion G. Romney, then First Counselor in the First Presidency, stated that Cumorah was in New York. Here's the link where you can watch or read his talk: https://www.lds.org/general-conference/1975/10/americas-destiny?lang=eng

"In the western part of the state of New York near Palmyra is a prominent hill known as the “hill Cumorah.” (Morm. 6:6.) On July twenty-fifth of this year, as I stood on the crest of that hill admiring with awe the breathtaking panorama which stretched out before me on every hand, my mind reverted to the events which occurred in that vicinity some twenty-five centuries ago—events which brought to an end the great Jaredite nation.

"You who are acquainted with the Book of Mormon will recall that during the final campaign of the fratricidal war between the armies led by Shiz and those led by Coriantumr “nearly two millions” of Coriantumr’s people had been slain by the sword; “two millions of mighty men, and also their wives and their children.” (Ether 15:2.)

"As the conflict intensified, all the people who had not been slain—men “with their wives and their children” (Ether 15:15)—gathered about that hill Cumorah (see Ether 15:11)....

"Thus perished at the foot of Cumorah the remnant of the once mighty Jaredite nation, of whom the Lord had said, “There shall be none greater … upon all the face of the earth.” (Ether 1:43.)

"As I contemplated this tragic scene from the crest of Cumorah and viewed the beautiful land of the Restoration as it appears today, I cried in my soul, “How could it have happened?”
...
"The tragic fate of the Jaredite and the Nephite civilizations is proof positive that the Lord meant it when he said that this “is a land of promise; and whatsoever nation shall possess it shall serve God, or they shall be swept off when the fulness of his wrath shall come upon them. And the fulness of his wrath cometh upon them when they are ripened in iniquity.” (Ether 2:9.)"

[NOTE: those who don't know much about Pres. Romney should read a bio. He was a lawyer and he was widely recognized as a Book of Mormon scholar and spoke about the topic often in General Conference. The wikipedia entry is here.]
________________ 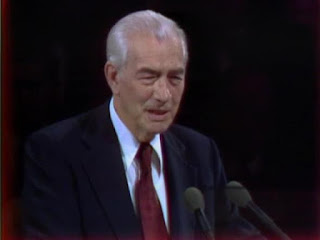 Mark E. Peterson. In the October 1978 General Conference, Elder Mark E. Peterson reiterated that Cumorah was in New York. Here's the link you can watch or read: https://www.lds.org/general-conference/1978/10/the-last-words-of-moroni?lang=eng

"Moroni’s father was commander of the armies of this ancient people, known as Nephites. His name was Mormon. The war of which we speak took place here in America some four hundred years after Christ. (See Morm. 6.)

"As the fighting neared its end, Mormon gathered the remnant of his forces about a hill which they called Cumorah, located in what is now the western part of the state of New York.

"Their enemies, known as Lamanites, came against them on this hill....

"When finished with the record, Moroni was to hide it up in that same Hill Cumorah which was their battlefield. It would come forth in modern times as the Book of Mormon, named after Moroni’s father, the historian who compiled it."

I hope every Latter-day Saint will take the time to recognize what is going on here. Current LDS scholars and educators actually think these prophets and apostles didn't know what they were talking about.

On my youtube channel, I'll show you how to do your own research and how to respond to the scholars and educators who continue to advocate these non-New York theories, because I don't want you to take my word for it. Look up the references I've given in my books and blogs. Make your own decisions about this topic.

As for me, I have no problem accepting what all of these prophets and apostles have said about Cumorah because it fits so well with the text and all the accounts in Church history--not to mention the archaeology, anthropology, geology, geography, etc.
Posted by jonathan3d at 3:46 PM