One of the key premises of the "two-Cumorahs" theory* is that Joseph Smith adopted a false tradition started by someone, presumably Oliver Cowdery, that the hill in New York was the Cumorah of Mormon 6:6.

This is the way the scholars rationalize away Letter VII, David Whitmer's discussion of Cumorah, D&C 128, etc. Then Joseph F. Smith, Joseph Fielding Smith, George Albert Smith, and others (not to mention all of Joseph Smith's contemporaries) also relied on this false tradition.

How do we know the New York Cumorah is a false tradition?

Because current LDS scholars say so.

Important note: I don't intend to offend anyone with this blog entry; if I'm wrong in any respect, I hope someone will correct me. I'd be happy to edit this post if I've misstated anything. Plus, I would very much like to know about any current LDS scholars (including BYU/CES educators) who accept the New York Cumorah and reject the two-Cumorahs theory.

I'm not kidding. This approach is implicit in everything they write about Mesoamerica. If you read FairMormon, FARMS/Maxwell Institute, the Interpreter, Book of Mormon Central, BMAF, and the rest, their theories of geography all rely on the two-Cumorahs theory.

Here's a graphic I use in some of my presentations. 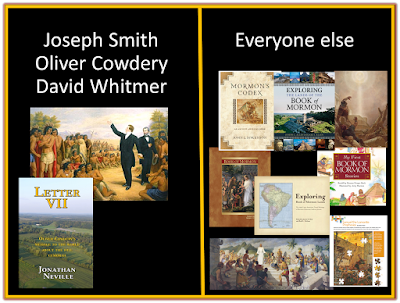 A few days ago, the Mormon Leaks channel on Youtube released videos of several presentations given to the Quorum of the Twelve. The Deseret News summarized the leaked videos here. You can see the videos here.

Really, the question of Book of Mormon geography is quite simple.

And it all starts with Cumorah, the pin in the map that connects Book of Mormon geography with modern geography.

In my view, it is the two-Cumorahs theory that is false.

NOTE: *The "two-Cumorahs" theory holds that the hill in New York currently named Cumorah (the Church-owned hill where the Pageant is held every year) is not the Cumorah mentioned in Mormon 6:6. That Cumorah is somewhere in southern Mexico, or Baja, or somewhere in South America, or Africa, or Asia. The only consistent claim of the "two-Cumorahs" theory is that it cannot be in New York. This theory originated with RLDS scholars in the 1920s and was adopted by LDS scholars over the specific objection of Joseph Fielding Smith.
Posted by jonathan3d at 7:00 AM