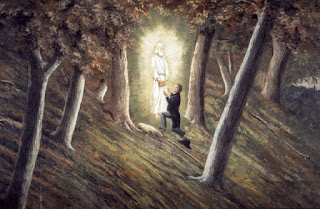 You might be surprised that this is necessary, but the prevailing view among LDS scholars is that the hill in New York has nothing to do with the Book of Mormon text. According to them, that hill is merely the unnamed location where Moroni concealed the plates and other artifacts that Joseph found in 1823.

Supposedly Moroni hauled these items over 3,000 miles from the "real" Cumorah in southern Mexico.

I know that makes no sense, but that's what you are supposed to believe if you read the scholarly works by professors employed by, affiliated with, or trained at BYU.*

If you're a student at any of the BYU campuses right now, ask your professors what they think and you'll see what I mean. Don't just ask your religion professors. Ask your psychology, English lit, or math professors.

If you're in a CES program, your instructors were probably also trained at BYU and also think that Cumorah is in southern Mexico. They're not supposed to teach that, but many of them do.

They can believe whatever they want. We all can.

On September 6, 1842, Joseph Smith wrote an epistle to the Saints. He sent it to the editor of the Times and Seasons for publication.** Later, the epistle was canonized as D&C 128.

The heading describes the contents of the final few verses:

18–21, All of the keys, powers, and authorities of past dispensations have been restored; 22–25, Glad and glorious tidings are acclaimed for the living and the dead.

The scholars have two ways to explain this verse.

First, they say Joseph adopted a false tradition started by unknown early Saints (presumably Oliver Cowdery). This false tradition gave the name "Cumorah" to the hill in New York based on speculation. The scholars say that hill cannot be the real Cumorah. They say Joseph had no idea where the Book of Mormon events occurred, so he went along with a false tradition and now it's in the Doctrine and Covenants.

Second, they say Joseph was paying homage to the hill in Mexico.

If you find these interpretations difficult to believe, good. But ask your instructors/professors about Cumorah. Usually they try to avoid the question, but if you persist, they'll give you one of those two answers. (If they come up with another one, let me know.)

Teaching moment: You can educate your instructors/professors by citing Letter VII, which Joseph and all of his contemporaries knew very well. Not a single member of the Church who lived when Joseph did was unaware that Cumorah was in New York.

The real false tradition about Cumorah started in the 1920s and was adopted by LDS scholars over the objection of Joseph Fielding Smith, then Church Historian and a member of the Twelve for 20 years. President Smith reiterated his objection when he was President of the Quorum of the Twelve, but LDS scholars ignored him again.

And they still do today.

Here are some classic quotations from Mesomania as examples:

“we further declare that the somewhere of the Book of Mormon is the geographic territory known as Mesoamerica, which, in general, involves territory from Mexico City on the north to the western parts of El Salvador and Honduras on the south. We maintain that all the actual New World events of the Book of Mormon took place within that territory.”[i]

“Although Joseph Fielding Smith was adamant in his opinon, the data upon which the opinion was based are not nearly as strong as his statement suggests.… The New York hill cannot be the Cumorah described in the text… Rather than being able to use Joseph as the foundation of the naming tradition, it is easier, according to the evidence of history, to see Joseph as accepting the tradition.”[iii]
[i] Book of Mormon Archaeological Forum (bmaf.org), a division of Book of Mormon Central, a web page maintained by the Ancient America Foundation which has promoted the Mesoamerican setting for decades.
[ii] John L. Sorenson, Mormon’s Codex (Deseret Book and the Neal A. Maxwell Institute for Religious Scholarship at BYU, 2015), p. 688.
[iii] Brant A. Gardner, Traditions of the Fathers (Greg Kofford Books), pp. 378-379
______________________

**There has been a long-held belief that Joseph was the acting editor of the Times and Seasons during this period. That belief was based on a historical mistake. The fact that he sent the letter to the actual editor for publication is just one of many pieces of evidence that demonstrate that Joseph was not editing the newspaper; in fact, he had little to do with it after April 1842. This is all discussed at length in The Lost City of Zarahemla and Brought to Light.
Posted by jonathan3d at 8:54 AM