The Book of Mormon describes King Mosiah as "a man that can translate."

I believe Joseph Smith was also "a man that can translate." Hence the title of my new book about the translation.

Because our intellectuals are so excited about showing that Joseph didn't actually translate the Nephite records, I though we should preview comments from an upcoming post to my supplement for Come, Follow Me 2020.

Let's take a moment to look at this passage:

Mosiah 8:13 Now Ammon said unto him: I can assuredly tell thee, O king, of a man that can translate the records; for he has wherewith that he can look, and translate all records that are of ancient date; and it is a gift from God.

As we saw the other day, some faithful LDS scholars now claim the Book of Mormon is the product not of Joseph Smith translating the plates, but of a translation (if it can even be called that) that was performed by an unknown individual circa the 15th century, which appeared on the stone Joseph put in a hat. They think Joseph didn't even look at the plates, which remained under a cloth the whole time he was dictating the text.

If Joseph Smith didn't really translate the plates, what about King Mosiah? Did he, too, merely read words that appeared on a stone, put there by some unknown translator of the Jaredite record from prior centuries? Did the 24 gold plates, found by Limhi's explorers, also sit under a cloth while King Mosiah put his face in a hat (or Mayan headdress) to read words that appeared on a stone?

Here's how Mosiah 8:13 would read according to this theory:

Mosiah 8:13 Now Ammon said unto him: I can assuredly tell thee, O king, of a man that can read the words of an ancient, unknown translator; for he has a stone and a hat to put it in, and he can look, and read the words that appear on the stone, and he needeth not any plates or ancient records; and it is a gift from God.

If you think that scenario sounds absurd, I agree. But why would Mosiah be any different than Joseph Smith? 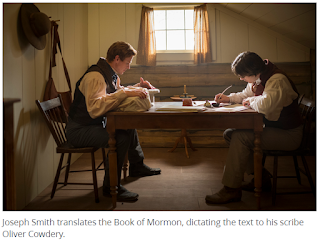 We'll discuss the other scribes tomorrow.
_____

One of the most obvious problems with the "seer/peep stone in a hat" scenario is the pointlessness of having the plates at all. The scholars tell us Joseph didn't even use the plates. They sat under a cloth the entire time, as depicted above.

For centuries, the Nephites kept records. For months or years, Mormon abridged those records. He moved them from the Hill Shim to the Hill Cumorah to prevent the Lamanites from getting them. Moroni concealed them in the Hill Cumorah until Joseph could find them.

All this effort only for Joseph to keep them under a cloth the entire time?

As you read the account of Mosiah, see how well it fits this "seer/peep stone in a hat" scenario.

7 And the king said unto him: Being grieved for the afflictions of my people, I caused that forty and three of my people should take a journey into the wilderness, that thereby they might find the land of Zarahemla, that we might appeal unto our brethren to deliver us out of bondage.

9 And for a testimony that the things that they had said are true they have brought twenty-four plates which are filled with engravings, and they are of pure gold.

10 And behold, also, they have brought breastplates, which are large, and they are of brass and of copper, and are perfectly sound.

11 And again, they have brought swords, the hilts thereof have perished, and the blades thereof were cankered with rust; and there is no one in the land that is able to interpret the language or the engravings that are on the plates. Therefore I said unto thee: Canst thou translate?

13 Now Ammon said unto him: I can assuredly tell thee, O king, of a man that can translate the records; for he has wherewith that he can look, and translate all records that are of ancient date; and it is a gift from God. And the things are called interpreters, and no man can look in them except he be commanded, lest he should look for that he ought not and he should perish. And whosoever is commanded to look in them, the same is called seer.

14 And behold, the king of the people who are in the land of Zarahemla is the man that is commanded to do these things, and who has this high gift from God.

15 And the king said that a seer is greater than a prophet.

16 And Ammon said that a seer is a revelator and a prophet also; and a gift which is greater can no man have, except he should possess the power of God, which no man can; yet a man may have great power given him from God.

18 Thus God has provided a means that man, through faith, might work mighty miracles; therefore he becometh a great benefit to his fellow beings.

19 And now, when Ammon had made an end of speaking these words the king rejoiced exceedingly, and gave thanks to God, saying: Doubtless a great mystery is contained within these plates, and these interpreters were doubtless prepared for the purpose of unfolding all such mysteries to the children of men.

According to the "seer/peep stone in a hat" narrative, Mosiah didn't need the plates any more than Joseph did. Some unknown translator from the past created the words that appeared on Mosiah's interpreters.

It's true that, according to verse 17, a seer can know anything. In that sense, the plates are unnecessary, theoretically. A seer could reveal the secrets of the past with or without any plates.

But the interpreters were prepared to unfold the mysteries contained in the plates. That's a special translation purpose, a subset of the power of a seer.

It's entirely possible that King Mosiah did merely read words that appeared on the interpreters, words that were put there by some unknown ancient translator. We cannot say that is impossible.

But look at how Chapter 28 describes this process.

10 Now king Mosiah had no one to confer the kingdom upon, for there was not any of his sons who would accept of the kingdom.

12 And this he did because of the great anxiety of his people; for they were desirous beyond measure to know concerning those people who had been destroyed.

13 And now he translated them by the means of those two stones which were fastened into the two rims of a bow.

14 Now these things were prepared from the beginning, and were handed down from generation to generation, for the purpose of interpreting languages;

15 And they have been kept and preserved by the hand of the Lord, that he should discover to every creature who should possess the land the iniquities and abominations of his people;

16 And whosoever has these things is called seer, after the manner of old times.

17 Now after Mosiah had finished translating these records, behold, it gave an account of the people who were destroyed, from the time that they were destroyed back to the building of the great tower, at the time the Lord confounded the language of the people and they were scattered abroad upon the face of all the earth, yea, and even from that time back until the creation of Adam.

To me, these verses establish as plainly as words can be that Mosiah translated the records. He did not merely read words that appeared on a seer stone that were put there by an unknown ancient translator.

I think Joseph Smith did the same thing; i.e., he studied the characters on the abridged plates with the Urim and Thummim and was able, with the gift and power of God, to translate the engravings.