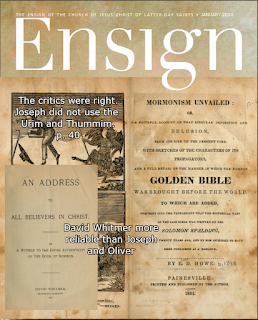 Because of the huge response to my post about the January 2020 Ensign, I'm going to clarify some points here.

The cover is my editorial depiction of the contents, not the actual cover of the original magazine. But don't be surprised to see such a cover eventually because that's the narrative we're getting from historians (and M2C advocates) today.

Consequently, the stone-in-a-hat narrative is being passed off as correct history, contrary to what Joseph and Oliver always taught.

If you read the contents of the Ensign, you will see in words and pictures a depiction of Joseph Smith translating the Book of Mormon with a seer stone in a hat. Here is a passage:

The “interpreters” used by Joseph during the translation process included the “two stones in silver bows” that were deposited by Moroni with the plates (see Joseph Smith—History 1:35.) In addition to these two seer stones, Joseph used at least one other seer stone that the Lord had provided.7

The first sentence is consistent with what Joseph and Oliver taught. They always said Joseph translated the plates with the Urim and Thummim. They never once said Joseph used a seer stone in a hat.

The article should have stopped right there.

Instead, the second sentence introduces Church members to Mormonism Unvailed and David Whitmer's "Address to All Believers in Christ."

Look at the sentence again.

In addition to these two seer stones, Joseph used at least one other seer stone that the Lord had provided.

This is what happens when historians accept statements uncritically. They mistake claims for truth.

This is an either/or situation, not "in addition to."

Logically, we cannot combine two directly contradictory statements with the phrase "in addition to." If we applied the logic of the Ensign article to the story of George Washington, we'd get this:

When there are directly contrary statements, people have to make a choice about whom to believe.**
_____

Because the historians apparently want Church members to read Mormonism Unvailed and "An Address to All Believers in Christ," let's see if there's an accurate way to frame these statements.

Those (and similar) materials are easily available on the Internet anyway. Critics have been citing them for years. They are old news.

What's new is reading them in the Ensign, especially presented as the "true" story of the translation.
_____

Here is an example of what would be historically and analytically accurate.

Although Joseph Smith and Oliver Cowdery always said Joseph used the Urim and Thummim that came with the plates, some observers claimed that Joseph instead used at least one other seer stone.

With this approach, we acknowledge the observers' statements without presenting them as the truth of what happened.

We also accurately show that these observers' statements directly contradict what Joseph and Oliver said.

And we don't make the unsubstantiated claim that the Lord provided the seer stone Joseph found in a well, which raises a host of other issues.
We can also recognize the difference between what these observers said they saw, and what they inferred they saw. Here's what I mean.

David Whitmer gave a detailed explanation that people gathered around a table in the Whitmer home. Joseph put a stone in a hat and read words so fast that his scribes had to take turns writing. There is no reason to think he was lying except if we don't like what he said, which is really no reason at all. But how do we reconcile that with what Joseph and Oliver said about the U&T?
David and other witnesses inferred this event was the translation, but a careful analysis indicates it was not a translation. The actual translation was laborious and took place upstairs in the Whitmer home. The Lord did not just give the words; Joseph had to work out the translation (D&C 9).

Why would Joseph conduct a demonstration?

The Whitmers and Joseph's own family were curious about the translation, but he was forbidden to show them the plates or the Urim and Thummim. Joseph's contemporaries were all familiar with the idea of a seer stone, so it made sense that he would use such a stone to demonstrate the translation process as best he could. (I think Joseph recited Isaiah from memory during the demonstration, which I think the text clearly shows, as I explained in my book, A Man that Can Translate).

Joseph's contemporaries knew the difference between the Urim and Thummim and the seer stones. The book Mormonism Unvailed made the distinction clear. It was in response to that book that Oliver and Joseph wrote the series of essays about Church history, beginning with Letter I that directly declared Joseph translated with the Urim and Thummim. E.g., * Oliver Cowdery describes these events thus: “These were days never to be forgotten—to sit under the sound of a voice dictated by the inspiration of heaven, awakened the utmost gratitude of this bosom! Day after day I continued, uninterrupted, to write from his mouth, as he translated with the Urim and Thummim, or, as the Nephites would have said, ‘Interpreters,’ the history or record called ‘The Book of Mormon.’ (Joseph Smith—History, Note, 1)

David, Emma and Martin also clearly distinguished between the U&T and SITH, right in the same accounts the historians rely on to establish SITH. It couldn't be more obvious.

Some claim David, Emma and Martin taught SITH to somehow undermine Joseph Smith and the Book of Mormon, but the opposite is true, based on what they actually wrote and said. Why did they think SITH would support the divine authenticity of the Book of Mormon? Because in their lifetimes, the widely-accepted explanation for the Book of Mormon was the Solomon Spalding theory, which claimed Joseph merely read a manuscript written by Spalding (and/or Sidney Rigdon) from behind a curtain. SITH proved Joseph had nothing to read from, so it directly refuted the Spalding theory.

In our day, few people care about the Spalding theory, so SITH is not relevant as an apologetic defense. Instead, SITH plays into the hands of critics who claim Joseph never really translated anything. And our own Ensign supports the claims of these critics.


Because the Ensign is teaching Church members about the seer stone scenario, readers deserve to know there are three ways to handle the observers' statements.

1. Accept them as true and reject (or redefine, which is essentially the same thing) what Joseph and Oliver taught. (Some revisionist historians claim Joseph and Oliver used the term "Urim and Thummim" to mean both the Nephite interpreters and the seer stone found in a well, but that redefinition of the term contradicts the plain and explicit history of the terms as used by Joseph and Oliver and their critics, as anyone can see by reading the original writings.)

2. Reject them as false because they contradict what Joseph and Oliver said. (This is problematic because it frames David Whitmer, Martin Harris, and Emma Smith as dishonest.)

3. Accept the factual elements as true but reject the hearsay and assumptions involved in the statements. (This is the approach that makes sense to me and is consistent with the historical evidence, as I explained above.)
_____

The next paragraph in the Ensign article comes close to objectivity by framing David's statement as mere "additional information." But by then it's too late because we were just told that Joseph actually did use the seer (or "peep") stones to translate and that this stone was provided by the Lord.

David Whitmer, whose family provided a place for Joseph and Oliver to complete the work of translation, provided this additional information: “Joseph Smith would put the seer stone into a hat, and put his face in the hat, drawing it closely around his face to exclude the light; and in the darkness the spiritual light would shine.

The article extends this quotation from "An Address to All Believers in Christ" for several paragraphs. It is obviously hearsay; David never claimed he looked into the hat himself. He did not personally observe words appearing and disappearing. He doesn't even claim Joseph told him what he saw. David just reports what he observed (or heard) and then makes his own inferences and assumptions about the translation.

Readers of this blog know that I think Joseph conducted demonstrations to satisfy curiosity and explain the concept, but never "performed" a translation in the presence of people who were not authorized to see the plates or the Urim and Thummim. That's just my interpretation, of course; it works for me but we're all free to deal with the evidence in whatever way makes sense.
_____

This all brings up the question of whether Church history matters. I'll be discussing that in upcoming posts. I suppose the existence in the Ensign of articles such as this demonstrate that history matters, but then the question becomes, does it matter whether we accept or reject what Joseph and Oliver taught?

*Today's Book of Mormon does not include the Book of Lehi that was on the 116 pages that Martin Harris lost. Martin Harris gave contradictory statements about how that translation took place, as did Emma. But none of the "stone-in-a-hat" witnesses said Joseph also used the Urim and Thummim after the 116 pages were lost.

**I think most observers accurately reported what they saw (or heard from other people), but they embellished because of mistaken assumptions. Joseph and Oliver were talking about the translation, while others were describing a demonstration that they incorrectly inferred was the translation. I wrote a book to explain all of this in detail.
https://smile.amazon.com/Man-that-Can-Translate-Interpreters-ebook/dp/B083DWSLDX/