Which movie are you watching?


Members of the Church read the scriptures, the Ensign (including Conference reports), the manuals, the Joseph Smith Papers, and all the rest.

And they reach different conclusions about some key issues.

Many LDS still believe what Joseph Smith and Oliver Cowdery always taught; i.e., that Joseph translated the plates with the Urim and Thummim that Moroni put in the stone box.

Joseph's critics said he never had the Urim and Thummim and never translated anything. He just read words that appeared on a stone in a hat (or made it up as he went along).

Some years ago, LDS intellectuals started teaching that the critics were right and Joseph and Oliver were wrong. Their teachings now permeate lesson manuals, videos, and even the illustrations in the Ensign.

There are a lot of us Church members who don't buy the "new" Church history, which is really nothing new at all, but just a rehash of the claims that Joseph and Oliver tried so hard to refute with facts.

So how can Church members see two completely different explanations of the translation of the Book of Mormon?
_____

The concept of "two movies on one screen" explains how two people can see the same facts yet reach completely different conclusions. 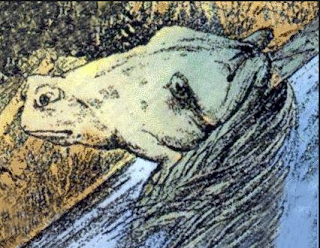 Look at the drawing to the left.

What do you see?

If everyone reading this blog could vote, we'd end up with about half the viewers saying one thing, and the other half saying another.

Maybe we think we're right and we cannot understand how someone else can see something different in the same image (the same screen).
_____

In the Church, people see different movies on one screen all the time.

The text of the Book of Mormon is an obvious example. Everyone's reading the same text, but some people think it describes Mesoamerica. Others think it describes Chile, Peru, Panama, Baja, New York, or what is now the Midwest and Eastern U.S.

Some people believe Oliver Cowdery, Joseph Smith, and others (presumably two of Joseph's brothers) visited the depository of Nephite records in the New York Cumorah (Mormon 6:6). Others believe that the accounts of these visits actually related visions Oliver had of a hill in Mexico.

You can think of more examples from your own experience.