I think it's healthy and productive to have discussions about Church history and Book of Mormon historicity because it can promote unity and understanding, even if we don't end up agreeing.

Especially if we don't end up agreeing.

I take as a given--I stipulate--that everyone honestly believes what they say. Everyone has good intentions. Everyone wants to be helpful.

The more we can simplify the issues and clarify that, ultimately, our beliefs are a result of our choices, the easier it is to understand one another and accept the differences in complete harmony.

Some time ago I discussed the principle of simplicity as it relates to Book of Mormon historicity.*

Most debates merge toward two opposing sides, and in this case, the debate is between New York Cumorah vs. non-New York Cumorah. Usually this is framed as M2C vs Heartland.

This is a very simple discussion.

I don't discuss this as a right/wrong situation. It's a matter of personal preference. I hope we can all agree on that, at least.

Below is a comparison diagram I'm going to discuss at a zoom conference on February 20th. It shows the interaction between the scriptures, the prophets and external evidence.

What we can't do is disagree about what the prophets have said about Cumorah. There, we can only accept or reject what they said.

The New York Cumorah is supported by all three components. Think of them as legs of a stool. It stands up, no problem. 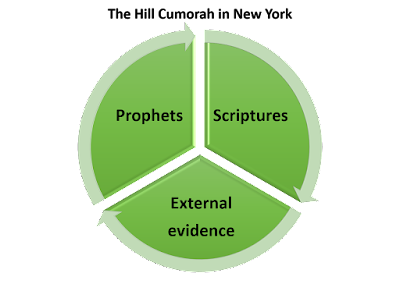 The Mexican Cumorah (M2C) is supported only by two of the three components or legs. M2C proponents necessarily repudiate what the prophets have taught; otherwise, their approach doesn't work.

And that's fine. People can be faithful, thoughtful, dedicated Latter-day Saints while also believing the prophets were wrong about this issue. 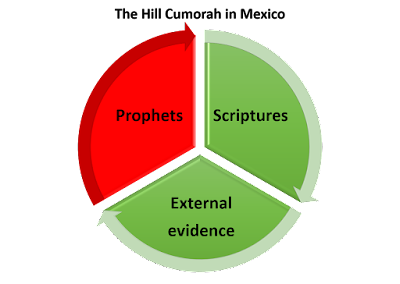 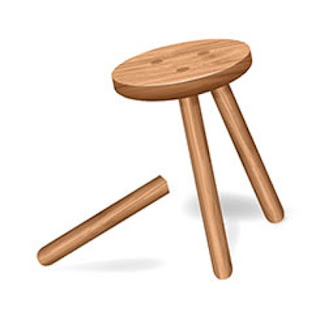 The simplest explanation is usually the best, a principle often described as Occam's razor. "Among competing hypotheses, the one with the fewest assumptions should be selected."

On the topic of Book of Mormon geography, which setting requires the fewest assumptions?

Which explanation is the simplest?

The North American setting has one assumption.

1. Joseph Smith and Oliver Cowdery knew that the Hill Cumorah in New York was the place where the Nephite and Jaredite civilizations were destroyed. Everything directly attributable to them is consistent with that setting. Contrary ideas are not directly attributable to them; therefore, these contrary ideas were produced by other people who didn't know what Joseph and Oliver knew.

The Mesoamerican setting relies on a series of assumptions:

1. Joseph Smith didn't know where the Book of Mormon events took place.
2. Oliver Cowdery (or another unknown person) at some unspecified date started a folk tradition that Cumorah was in New York, based on an incorrect assumption.
3. Joseph misled his wife Emma when he wrote to her about crossing the plains of the Nephites after he'd crossed Ohio, Indiana, and Illinois.
4. Oliver memorialized the incorrect folk tradition in Letter VII in 1835.
5. Joseph, for unexplained reasons, passively adopted Oliver's speculation and had it widely published.
6. Joseph, who wrote very little himself, nevertheless wrote a series of  articles in the Times and Seasons about Central America that he left anonymous for unknown reasons.
7. David Whitmer, late in life, conflated his own specific memory of the first time he heard the word "Cumorah" with Oliver's folk tradition.
8. Etc.

Which set of assumptions makes the most sense to you?

Here are some relevant quotations about simplicity.

“If you can't explain it to a six year old, you don't understand it yourself.”
― Albert Einstein

To which Groucho Marx replied:

“Truth is ever to be found in the simplicity, and not in the multiplicity and confusion of things.”
― Isaac Newton

“Why did they believe? Because they saw miracles. Things one man took as chance, a man of faith took as a sign. A loved one recovering from disease, a fortunate business deal, a chance meeting with a long lost friend. It wasn't the grand doctrines or the sweeping ideals that seemed to make believers out of men. It was the simple magic in the world around them.”
― Brandon Sanderson, The Hero of Ages

“People who pride themselves on their "complexity" and deride others for being "simplistic" should realize that the truth is often not very complicated. What gets complex is evading the truth.”
― Thomas Sowell, Barbarians inside the Gates and Other Controversial Essays

“..things are never as complicated as they seem. It is only our arrogance that prompts us to find unnecessarily complicated answers to simple problems.”
― Muhammad Yunus, Banker to the Poor: Micro-Lending and the Battle Against World Poverty

“I am not a genius, I am just curious. I ask many questions. and when the answer is simple, then God is answering.”
― Albert Einstein
Posted by jonathan3d at 10:00 AM