Oliver, Joseph, and scribes and Pharisees

It's a clear choice.

Once you decide whom to believe, you can confirm your choice with a corresponding interpretation of the scriptures and the relevant external evidence.

In the conference last Saturday, I illustrated this point with two slides. (click to enlarge) 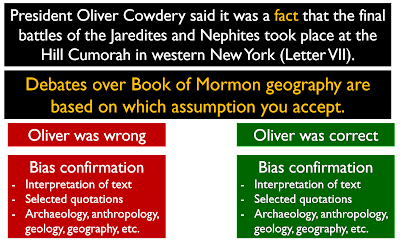 Reasons to disbelieve Joseph and Oliver:

- The New York Cumorah contradicts the theories of intellectuals that the "real" Cumorah is somewhere in southern Mexico (although not yet located), because of their claim that the entire Book of Mormon took place in a limited area of Mesoamerica.

- Everyone who said Cumorah was in New York was wrong. Credentialed modern scholars are more credible and reliable than eye-witnesses and angelic ministrations.

- There is no evidence that millions of Jaredites and/or hundreds of thousands of Nephites/Lamanites died around Cumorah.

Reasons to believe Joseph and Oliver:

- Moroni told Joseph the name of the hill on his first appearance to Joseph.

- Joseph referred to the hill as Cumorah even before he got the plates.

- According to David Whitmer, a divine messenger, whom Joseph identified as one of the Nephites, took the abridged plates from Harmony to Cumorah.

- Joseph and Oliver visited the depository of Nephite records in the hill Cumorah in New York at least three times.

- After Heber C. Kimball joined the Church in 1832 he visited Cumorah and observed the embankments still around the hill. Most have since been plowed under, but one small remnant remains. He also observed numerous hilltop fortifications.

- In the eight historical essays published in 1834-5, Oliver declared it was a fact that the mile-wide valley west of Cumorah in New York was the site of the final battles of the Jaredites and Nephites.

- Joseph helped write the essays, had them copied into his own history as part of his life story, and had them republished in the Gospel Reflector, the Times and Seasons, the Prophet, and the Millennial Star.

- All of Joseph's contemporaries and successors who ever discussed the topic reaffirmed what Joseph and Oliver taught.

- Physical evidence is consistent with expectations based on the text. Archaeologists have discovered Adena (Jaredite) and Hopewell (Nephite) sites in western New York, including hastily-constructed hilltop fortifications we would expect from the retreat of the Nephites to Cumorah.

- The bodies in the battles were left unburied, meaning they would dissolve quickly, just like the bones of deer and other animals. Useful weapons or other materials would be taken by the victors and/or others who passed through the area over the centuries. Other famous battles in history, such as the Battle of Hastings that involved 10,000 people, have left no evidence after hundreds of years.

This brief overview supports whatever you want to believe, whether you believe or disbelieve Joseph and Oliver.