The 3 rules of groupthink (below) are carefully followed to preserve M2C as the default position of the Church, as shown in the curriculum of CES and BYU, the visitors centers, and Church art and media.

The symbol of the artificial environment of M2C groupthink:

The antidote: diversity of thought. 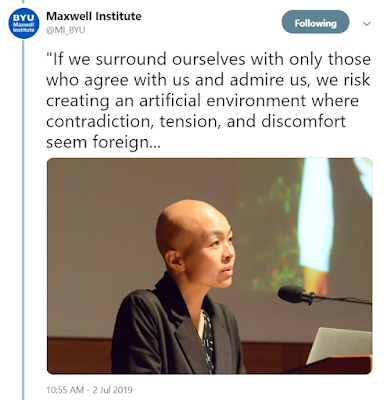 The 3 rules of groupthink. These rules explain how Book of Mormon Central and the rest of the M2C citation cartel maintain M2C:

Groupthink was a term coined in the Sixties by a Yale psychology professor Irving Janis. [Christopher] Booker brought it up to date by taking in the climate change scare.

What Janis did was to define scientifically just how what he called groupthink operates, according to three basic rules. And what my paper tries to show is the astonishing degree to which they explain so much that many have long found puzzling about the global warming story.

Janis’s first rule is that a group of people come to share a particular way of looking at the world which may seem hugely important to them but which turns out not to have been based on looking properly at all the evidence. It is therefore just a shared, untested belief.

Rule two is that, because they have shut their minds to any evidence which might contradict their belief, they like to insist that it is supported by a “consensus”. The one thing those caught up in groupthink cannot tolerate is that anyone should question it.

This leads on to the third rule, which is that they cannot properly debate the matter with those who disagree with their belief. Anyone holding a contrary view must simply be ignored, ridiculed and dismissed as not worth listening to.