Seeing the material produced by Book of Mormon Central lately, it seems there is nothing an M2C intellectual enjoys more than convincing others that he/she knows more than the prophets. That's what M2C is all about. It's why they call one of their journals The Interpreter as if it is up to the intellectuals to interpret the scriptures, instead of the prophets and individual members.

Academic pride seems to be driving a lot of revisionist Church history as well. And the explanations given by LDS intellectuals are making the problem worse.
_____

People ask me all the time about the stone-in-the-hat theory of translation. This is the currently popular narrative that Joseph Smith read words off a stone-in-a-hat to dictate the Book of Mormon. It was featured in Saints, which I didn't address in detail because of the other significant problems in that book (the censorship of Cumorah, the phony Mary Whitmer/Moroni story, etc.).

Many members have said they felt betrayed or misled when Church intellectuals and media embraced the stone-in-a-hat theory because they had been taught all their lives that Joseph translated the plates by using the Urim and Thummim that Moroni put in the stone box with the plates. 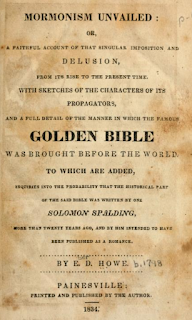 Although it is new to many Church members today, the stone-in-a-hat theory had its origins back in 1834 in a book titled Mormonism Unvailed.  The authors published the book in Painesville, Ohio, just a few miles from Kirtland, and sought every way possible to discredit Joseph Smith, his associates, and the Book of Mormon. They articulated the stone-in-a-hat theory as an alternative to Joseph's account that he translated the plates with the Urim and Thummim that Moroni put in the stone box with the plates.

Certain modern scholars have revived the stone-in-a-hat theory as if it was recently discovered, but in reality it is 184 years old.

It's old news to anyone who is familiar with Church history.

Here's the key: Joseph and Oliver dealt with it right after it was first published in Mormonism Unvailed. Recently it has risen from the dead, a zombie of Church history. Sadly, it is our own Church historians who have given it life.
_____

We can understand the chronology of the alternative theories through a simple chiasmus:

IOW, our current intellectuals have now embraced what only the critics claimed back in 1834. As we'll see below, Oliver and Joseph specifically repudiated the stone-in-a-hat theory. That's why, for 180 years, the prophets taught that Joseph used the Urim and Thummim to translate, and not the stone-in-a-hat.

Critics such as CES Letter made a big issue out of the stone-in-a-hat narrative. They claimed the Church was covering up its history. In response, what did our intellectuals do?

Did they reaffirm what Joseph and Oliver taught about the translation?

Instead, they embraced the arguments of the critics, and now they are teaching the youth the stone-in-a-hat theory, including the idea that Joseph didn't even use the plates.

You can see how this plays out right here on the CES Letter page: https://cesletter.org/debunking-fairmormon/book-of-mormon-translation.html.

In my view, the revisionist Church historians' revival of the stone-in-a-hat zombie is an unmitigated disaster.
_____

At the end of this post, we'll see how the stone-in-a-hat theory implicates M2C and why the M2C citation cartel, including Book of Mormon Central, promote the stone-in-the-hat theory.

First, we observe that the stone-in-a-hat theory has been set forth in the Gospel Topics Essay on Translation, in the pages of the Ensign, and in numerous books and articles by revisionist Church historians. It is portrayed in the recent Church film about Harmony. It is being taught in visitors centers. The Priesthood Restoration site in Pennsylvania even features a hat in the Joseph Smith cabin, but at least they hadn't put a stone in it when I visited there.

An article in the Ensign, for example, makes this claim:

By 1833, Joseph Smith and his associates began using the biblical term “Urim and Thummim” to refer to any stones used to receive divine revelations, including both the Nephite interpreters and the single seer stone.17

That statement is purely revisionist history.

If you read Woodruff's journal, he never says he saw a seer stone. He simply says "I had the privilege of seeing for the first time in my day the URIM & THUMMIM."
You can read his journal entry yourself here:
https://catalog.churchofjesuschrist.org/assets?id=28b53d73-2ba2-418b-8ef7-dafcc935bee3&crate=0&index=125

The historians simply infer that Woodruff saw a seer stone and then state their inference as a fact.

Those interested in more details about all of this can read my upcoming book. For example, Heber C. Kimball said Brigham Young had the Urim and Thummim.

I'm not saying that it's impossible the term was used for things other than the Nephite interpreters prepared for the translation of the plates, but I am saying that in 1834 forward, during Joseph's lifetime, there was a clear delineation between the Urim and Thummim and any seer stones. That's why it is so important to recognize that Joseph and Oliver always said Joseph translated the plates using the Urim and Thummim.

As we see below, in 1834 even the critics recognized the distinct difference between (i) the "seer stone" that Joseph found while digging a well and (ii) the Urim and Thummim prepared anciently for the translation of the Book of Mormon.

The idea that Joseph and his associates used the term "Urim and Thummim" to refer to the seer stone Joseph reportedly found in a well is merely an effort by the revisionist historians to reconcile what Joseph and Oliver (and their contemporaries and successors) taught with what the critics claimed.

That's an understandable approach. The revisionist historians sought an explanation that is both historically accurate and palatable to Church members. But instead of an explanation that makes sense and is consistent with the historical record--an explanation that would help people understand history and reaffirm the teachings of the prophets--these intellectuals simply adopted the claims of the critics and embraced the stone-in-a-hat theory.

The revisionist historians have inadvertently caused great confusion and ridicule, and they have given enemies of the Church plenty of ammunition to destroy faith.
_____

On page 18, which you can read here, Mormonism Unvailed acknowledges two alternative explanations of the translation. The first involved the seer stone (which the book calls a "peep stone") that Joseph put in a hat to read off the words that appeared. Setting aside the sarcasm of this passage, we can see that the first paragraph below is what our revisionist Church historians are teaching today (although they claim Joseph saw a group of words instead of a single word at a time).

The translation finally commenced. They were found to contain a language not now known upon the earth, which they termed "reformed Egyptian characters." The plates, therefore, which had been so much talked of, were found to be of no manner of use. After all, the Lord showed and communicated to him [Joseph] every word and letter of the Book. Instead of looking at the characters inscribed upon the plates, the prophet was obliged to resort to the old ''peep stone," which he formerly used in money-digging. This he placed in a hat, or box, into which he also thrust his face. Through the stone he could then discover a single word at a time, which he repeated aloud to his amanuensis, who committed it to paper, when another word would immediately appear, and thus the performance continued to the end of the book.


This version of the translation was been infamously portrayed in an episode of South Park, as well as on many web pages critical of the Church.

Now, this stone-in-a-hat theory has been embraced in Church publications, as mentioned above.

Another account they give of the transaction, is, that it was performed with the big spectacles before mentioned, and which were in fact, the identical Urim and Thumim mentioned in Exodus 28 — 30, and were brought away from Jerusalem by the heroes of the book, handed down from one generation to another, and finally buried up in Ontario county, some fifteen centuries since, to enable Smith to translate the plates without looking at them !

Mormonism Unvailed is not noted for accuracy in its presentation about the Book of Mormon. Here, the authors missed the points that (i) the Urim and Thummim that Joseph received was not brought from Jerusalem by Lehi but instead had been used by the Jaredites in America, and (ii) Joseph actually looked at the plates with the spectacles.

Faced with the publication of Mormonism Unvailed, how did Joseph and Oliver respond?

We'll cover this in part 2, tomorrow.

To be continued...
_____
* The stone-in-a-hat theory is based on accounts of demonstrations Joseph conducted to satisfy people's curiosity, while he was under the constraint of never showing the plates or the Urim and Thummim to unauthorized persons. Not a single one of these witnesses ever recorded what Joseph actually dictated during these demonstrations. There is no account of Joseph or Oliver ever saying Joseph used a seer stone instead of the Urim and Thummim to translate the plates. People simply inferred that the demonstrations were actually the translations of the plates, but Joseph and Oliver consistently taught otherwise.