"I hope that this will stop" 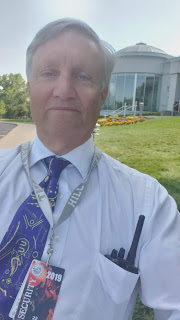 The title of this post has nothing to do with the Hill Cumorah pageant, as you'll see below. I wish the pageant could continue because of all the good it has done, but I understand the rationale for ending it after 2020. Before addressing the title of this post, here's an update on pageant.

I was on security duty at the Hill Cumorah visitors center yesterday. It's wonderful to see all the visitors and meet so many of them. They come from around the world and learn a lot about Church history. Lots of enthusiasm and testimony building.

It's also cool that so many are learning, some for the first time, what the prophets have taught about the Hill Cumorah in New York. The bookstore and museum downtown next to the Grandin building have been very busy all week.

Pageant this year has been awesome. Despite some heavy rain last Thursday, and a little more on Saturday, the crowds have averaged around 5,500, which projects to about 44,000 if the attendance stays the same throughout this week. I understand that's about 50% more than the last few years.

As I showed on the video last week, there are still a few protesters, but they are friendly and doing what they think is right. It kind of adds to the atmosphere because one of the themes of the pageant is persecution of the prophets, starting in Jerusalem and continuing into America.
_____

Here's a fun story about Elder Christofferson and pageant.

The Hill Cumorah pageant continues to inspire and energize thousands of members of the Church.
_____

Now, let's consider the title of this post: "I hope that this will stop." That's a great title for what I hope will stop; i.e., the ongoing censorship of any facts or ideas that contradict M2C.

The title comes from a post by one of our favorite M2C intellectuals, the wonderful brother Dan Peterson, a BYU professor, former FARMS principle, current head of the Interpreter Foundation, etc. He's a great guy who has written lots of useful and important material. However...

There's always a downside of calling attention to an otherwise obscure corner of the Internet, but in this case, it's a chance for people to see how the M2C intellectuals operate. That upside outweighs the downside, so here goes.

Apparently for a while now, brother Dan has used his blog to link to an anonymous troll who has been criticizing my ideas. I can see why Dan would refer people to this troll; the troll's arguments are so irrational that they make Dan's look good by comparison.

The whole thing is bizarre, really; brother Dan could contact me directly if he has a problem. I've tried to meet with him but he refuses.

The tactic I want to point out is this: if you disagree with M2C intellectuals, they'll quickly play the "apostate" card, just as brother Dan did here.

That's standard totalitarian tactics. It fits with the actions of the M2C citation cartel over the last few decades.

By contrast, I've made it clear that I don't care what anyone else thinks. People are entitled to believe whatever they want, and that doesn't make them apostates.

The issue that brother Dan is worked up about is this: do we accept or reject what the prophets have taught about the New York Cumorah?

Instead, you're supposed to believe Cumorah is in southern Mexico (or in BYU's fantasy world) and if you don't believe that, you're an apostate.

I think that's a mistake, for all the reasons I've explained. In my view, M2C is a false tradition that not only contradicts the teachings of the prophets, but contradicts the text and everything known about ancient Central America.

But these are merely differences of interpretation and opinion. None of this is personal, from my perspective. I have no problem with those who believe M2C. I don't think they are apostates; I readily agree that they are faithful members of the Church, wonderful in every way. I only think the M2C citation cartel should follow the Church's policy of neutrality and allow members of the Church (and investigators) to learn about alternative ideas that support the teachings of the prophets about Cumorah.

Basically, I oppose censorship of the teachings of the prophets and I support the Church's position of neutrality. That's why I freely recommend that people read the M2C material for comparison.

Brother Dan is one of the most prominent censors. Before he was belatedly terminated from FARMS (after FARMS merged into the Maxwell Institute), FARMS had what I consider a well-deserved reputation for thin skin and ad hominem attacks. FARMS eventually disintegrated, but brother Dan took his donors and followers and created a new vehicle for his brand of rhetoric: The Interpreter Foundation.

There are many good articles on the Interpreter, interspersed with M2C apologetics and attacks on those who dare to question M2C. You can get a flavor for it here:
http://interpreterpeerreviews.blogspot.com/
_____

The specific issue that prompted brother Dan's latest blog post involves the phony story that it was Moroni who showed the plates to Mary Whitmer.

The story is silly on its face. If you look up the citation in the Saints book, Mary called the messenger "Brother Nephi" but her grandson (or another editor) concluded she must have been talking about Moroni. IOW, the Moroni story is based on the assumption that Mary was wrong.

Plus, David Whitmer said the messenger who showed Mary the plates was the same one who took the Harmony plates to Cumorah. David said Joseph told him it was one of the Nephites. The Moroni story is based on the assumption that David and Joseph were wrong.

Both David and Mary described him as a heavy set older man. That's such a different description than the one we have of Moroni when he appeared to Joseph that to accept the Moroni-Mary Whitmer story, we also have to accept the idea that resurrected beings are shape-shifters; i.e., they can assume multiple physical forms, etc.

I discussed all of this here:

The question is, why would the M2C intellectuals and revisionist Church historians promote the Moroni story in the face of all this evidence?

It's simple. They don't want people to know or think about the implications of the messenger taking the Harmony plates to Cumorah.

I disagree with the M2C premise and its repercussions. Instead, I believe the teachings of the prophets (and the 3 witnesses). So Brother Dan wants to label me as an apostate.

It's quite a sight to behold.