The next time you visit a temple, look at the statue of Moroni and think about what Moroni taught. Compare Moroni's teachings to what we're being told by the M2C intellectuals and the revisionist Church historians.
_____

(When we visited the Tokyo temple some years ago, lightning had struck the statue and knocked the trumpet out of Moroni's hands.)

Every time we visit a temple, the Moroni statue is a reminder of the restoration of the Gospel. But it's also a reminder of what Moroni taught about the Book of Mormon itself.

Sadly, and inexcusably, our M2C intellectuals are teaching our youth that Moroni was wrong about important aspects of the restoration.
_____

You can read a brief history of the Moroni statues here. The first temple to feature a statue of an angel identified as Moroni was the Salt Lake temple, dedicated in 1893. 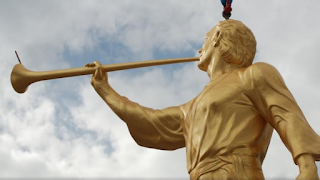 Why a statue of Moroni?

One webpage that focuses on temples explained it this way: Because the angel Moroni had such a significant role in in restoring the everlasting gospel to be preached to all the world, we now place his statue atop the temples. He is shown as a herald of the Restoration to usher in the 2nd coming of Jesus Christ.

I like to think these statues are a re-affirmation of what Moroni taught, both in the Book of Mormon and directly to Joseph Smith and others.

Notice, too, that the statue of Moroni fits the description given by Oliver Cowdery and Joseph Smith. He had on a loose robe of most exquisite whiteness. It was a whiteness beyond anything earthly I had ever seen; nor do I believe that any earthly thing could be made to appear so exceedingly white and brilliant. His hands were naked, and his arms also, a little above the wrist; so, also, were his feet naked, as were his legs, a little above the ankles. His head and neck were also bare. JS-H 1:31.

The stature of this personage was a little above the common size of men in this age; his garment was perfectly white, and had the appearance of being without seam. Oliver Cowdery, Letter IV.

Moroni was not a portly old man with a long beard, less than six feet tall, the way David Whitmer and his mother Mary described the messenger who took the Harmony plates to Cumorah and brought the plates of Nephi to Fayette. According to Joseph Smith, that was one of the Nephites. According to Mary Whitmer, he called himself brother Nephi.

They teach that this old man was Moroni because they don't want people to know that the Hill Cumorah is in western New York.

They don't even want people to know that this messenger took the Harmony plates to Cumorah because they want people to believe the real Hill Cumorah that contains the repository of Nephite records is in southern Mexico.

Think about this contrast every time you visit a temple.