Yesterday and the 4th of July

If you haven't seen it yet, you should go see the movie Yesterday. It's the best movie we've seen in years and it will stick with you for a long time. You'll want to see it more than once.

Here is the trailer:
https://trailers.apple.com/trailers/universal/yesterday/

The premise is a world in which only one person remembers the Beatles. It's an awesome exploration of the nature of memory, cultural literacy, community, psychology and other topics.

IMO, Danny Boyle is the best director working today and this movie is almost as good as Slumdog Millionaire. Or maybe it's better. Regardless of what other movies come out this year, Yesterday deserves to win Best Picture at the Academy Awards.
_____

I'm writing about it on this blog for two reasons.

1. Because of M2C the memory of members of the Church of Jesus Christ of Latter-day Saints is being systematically erased by censorship of Letter VII and other teachings of the prophets about the New York Cumorah. Think about that after you watch Yesterday.

2. The collective memory of Americans who celebrate the 4th of July is also being systematically erased. Young people today hardly know about, and rarely appreciate, the significance of the Declaration of Independence and the ensuing war.

This comment is a pretty good summary of the mindset that forgets Yesterday:

Americans always focus on "what's next." One of the reasons that so many Americans ignore history and refuse to learn from the past is this inherent passion for tomorrow and boredom with yesterday. In many ways, this attitude was driven into the psyche of the country from the very beginning. As European settlers learned that they were in a new land with new opportunities and had to focus on carving out a better future, they realized they couldn't rely on the old structure of European aristocracy and its fixed rules. Generations later, this same passion carries into politics to such a degree that even before an election, people begin speculating on the next campaign.

Every nation in the world is a promised land to its inhabitants, of course. Every nation whose people serve God by serving one another and who live the principles of the Gospel regardless of their religious beliefs will be blessed. 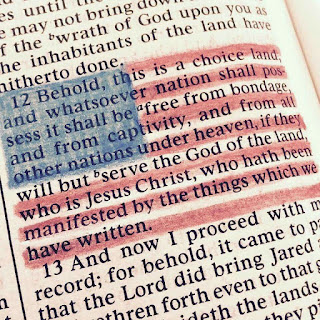 But I'm writing about the 4th of July, a specifically American holiday.

Maybe this 4th of July as Americans celebrate independence, they should also think about the promised land in which they live.
Posted by jonathan3d at 6:00 AM