There are a lot of new readers here, many of them are faithful, active LDS who find the persistence of M2C puzzling. We've discussed it a lot on this blog, but we'll review it briefly again, with links for more information at the end.

We wonder, why would LDS intellectuals reject the consistent, persistent teachings of the prophets about the New York Cumorah? Why would they insist that the events in the Book of Mormon took place in the confined area of Mesoamerica? Why would they teach their students and followers that the Nephites were Mayans, that the Book of Mormon describes Mayan culture, and that Joseph Smith didn't translate the book correctly because he was unfamiliar with Mayan culture?

On this blog and in my books, especially Mesomania, we've discussed these issues but today I'd like to mention one particularly influential explanation. This is the idea that the New York Cumorah, along with the Urim and Thummim and other elements of early Church history, were invented communal stories that early LDS created to understand their world. 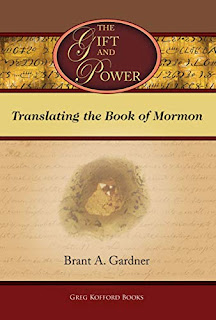 Brant A. Gardner, a thoughtful scholar and faithful LDS who is a great guy, is deeply committed to M2C. He is one of the more influential M2C promoters due to his involvement with the M2C citation cartel and his activity on the Internet. He curates comments at the Interpreter and has written several M2C-promoting books and articles.

The basic premise of M2C is that the "real" Cumorah of Mormon 6:6 is in southern Mexico. This means that the Three Witnesses, each of whom identified the "hill in New York" as Cumorah, were mistaken.

Not only them, but Joseph Smith (as related by others, and D&C 128:20), as well as all the LDS Church leaders who reiterated the teaching about the NY Cumorah, were expressing personal opinions based on a false tradition and they were wrong.

That sounds incredible to many faithful LDS, but you can ask any M2C believer and see for yourself. Usually, they will try to avoid the question. Most CES and BYU teachers, for example, have been told to say something such as "I don't care about the geography, because the purpose of the book is to testify of Christ."

No faithful person disagrees with that, of course; it's a red herring fallacy, sometimes used to imply that anyone who does care about the setting of the Book of Mormon is unfaithful, belligerent, contentious, or naive. And yet, we have a long list of prophets who have taught that Cumorah was in New York. It was a key defense of the Restoration in Oliver Cowdery's letters IV, VII and VIII.

Both CES and BYU use an M2C-inspired fantasy map to teach the Book of Mormon, so their protestations that geography doesn't matter ring hollow. If you persist in seeking their explanation for their belief in M2C, it will come down to their conviction that the prophets were wrong.

And so we wonder, why do they think the prophets were wrong?

One reason is the rationale offered in Brant's book, The Gift and Power: Translating the Book of Mormon. Published in 2011, the book is divided into three parts that explain Brant's views on

(i) the translation process,

(ii) what kind of translation the Book of Mormon is, and

(iii) how Joseph translated with a seer stone.

Like many other LDS historians, Brant proposes that the accounts of early Church events were the product of a process of creating a communal story.

The process of working out the communal story explains a number of items from the early Church histories. Theirs was a living community that was building its self-identity in the face of strong persecutions. Their stories helped make sense of their present community, even though they were stories told of previous times. This is simply a normal process of memory. As Michael Schudson... explains, "Memory selects and distorts in the service of present interests..."

The second explanation is how the Saints constructed their past. It was a manipulation intended to make sense of the present.

In the section titled "A Transcript Becomes a Sealed Book," Brant explains that when Martin Harris visited Professor Anthon, Martin "had to recall something fairly close to the reported phrase [from Isaiah] or he and Joseph would not have so completely connected the Anthon incident with the fulfillment of Isaiah's prophecy... After studying Isaiah further, the association was made complete and the remember phrase became precise. From that point on, the Book of Mormon became important as a sealed book. The internal references to a spiritual sealing were transformed into  physically sealed portion."

In "Interpreters Become the Urim and Thummim," Brant says that "The communal association of Urim and Thummim with any of the instruments used in the translation became such a common description that it fed into Joseph Smith's vocabulary and descriptions. Not only did the community use that description, but Joseph, who certainly knew what a seer stone was called, eventually used the terms Urim and Thummim for them as well. That name for the interpreters or seer stones was inserted into sections of the Doctrine and Covenants instead of other possible names."

In "A Hill Becomes Cumorah," Brant explains the origin of the supposedly false tradition of the New York Cumorah. He writes, "Joseph's use of the term [Cumorah] in 1842 is similar to his use of Urim and Thummim for the interpreters and the seer stones. Although he was in a perfect position to know a different name and to correct the Saints, what we see is that the Saints' communal interpretation of history also fed Joseph's vocabulary and therefore influenced descriptions of that history. Joseph not only allowed the communal creation of the Church's history; he embraced it. The sacralization of the New York hill by association with Cumorah tapped into the miraculous nature of the discovery and translation of the plates. Nevertheless, the connection appears to have been made upon a misreading of the text."

Brant doesn't address Letter VII or the teachings of the prophets, but he does mention David Whitmer's statement about the messenger who took the Harmony plates to Cumorah. Here is his explanation:

"This report would be much more conclusive had it not been recorded nearly fifty years later. The passage of time and the accepted designation of 'Cumorah' as the name of the New York hill by the time of the recollection argues against this second-hand report from Whitmer as being a definitive statement."

Although this account was provided nearly fifty years later, the specificity of David's recollection--that this was the first time he heard the word Cumorah--is a strong indicator of accuracy and veracity. Besides, there is evidence David was relating this incident on the road to Fayette as early as 1832. We discussed that before here:

There are numerous other accounts from early Church history about Cumorah, including one that Lucy Mack Smith quoted Joseph saying in early 1827 before he even got the plates. For more info, see