Yesterday we discussed one of the problems with using the fake fantasy maps from CES and BYU to teach the Book of Mormon.

Ether 2:9 is meaningless if the land the Jaredites occupied is imaginary. 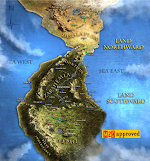 President Marion G. Romney showed a better way to teach Ether 2:9 when he spoke about America's Destiny many years ago in General Conference.

You can read some of his talk here, but for some reason it is truncated.

You can read all of his talk here:

You can watch his talk here:

Among the questions frequently raised in connection with our upcoming national bicentennial is “Can we maintain our basic freedoms, peace, and prosperity for another 200 years?”

The answer to this question is yes, if we shall individually repent and conform to the laws of the God of this land, who is Jesus Christ....

It is my purpose in making these remarks to point out from the record of ancient inhabitants of America that the foregoing decrees have been carried out.

In the western part of the state of New York near Palmyra is a prominent hill known as the “hill Cumorah.” (Morm. 6:6.) On July twenty-fifth of this year, as I stood on the crest of that hill admiring with awe the breathtaking panorama which stretched out before me on every hand, my mind reverted to the events which occurred in that vicinity some twenty-five centuries ago﻿—events which brought to an end the great Jaredite nation....

As I contemplated this tragic scene from the crest of Cumorah and viewed the beautiful land of the Restoration as it appears today, I cried in my soul, “How could it have happened?”...

Pursuant to this decree concerning the land of America, the Jaredites were swept off in the manner we have reviewed, because, rebelling against the laws of Jesus Christ﻿—the God of the land﻿—they “ripened in iniquity.”

Nor were they the only people who anciently were divinely led to this choice land to grow in righteousness to be a mighty nation and then to deteriorate in wickedness until they ripened in iniquity and were, pursuant to God’s decree, swept off....

This second civilization to which I refer, the Nephites, flourished in America between 600 B.C. and A.D. 400. Their civilization came to an end for the same reason, at the same place, and in the same manner as did the Jaredites’. From the account of their death struggle, I quote:

“And now,” says Mormon, their historian, “I finish my record concerning the destruction of my people, the Nephites. And it came to pass that we did march forth before the Lamanites … to the land of Cumorah. … And when … we had gathered in all the remainder of our people unto the land of Cumorah, … my people, with their wives and their children, did … behold the armies of the Lamanites marching towards them; and with that awful fear of death which fills the breasts of all the wicked, did they await to receive them....

The tragic fate of the Jaredite and the Nephite civilizations is proof positive that the Lord meant it when he said that this “is a land of promise; and whatsoever nation shall possess it shall serve God, or they shall be swept off when the fulness of his wrath shall come upon them. And the fulness of his wrath cometh upon them when they are ripened in iniquity.” (Ether 2:9.) ...