When they are learned...

People wonder why those who are young and educated are most adamant about M2C.

Partly this is a result of imprinting; they have been taught M2C their entire lives, both directly and subliminally. They "can't unsee it" as one of the prominent M2C scholars explained.

Partly it is the process of maturation; nothing is more stereotypical than the young scholar who believes he/she has it all figured out, having adopted a particular way of thinking from an esteemed role model; i.e., his/her professors.

Jacob described this nicely: When they are learned they think they are wise (2 Nephi 9:28).

Those who are more experienced know how the maturation process works because we've all been through it. Young people cannot possibly know because they are at the beginning stages of the maturation process. Many of them think they understand because of what they've read, or what someone has told them, but that's precisely why they are so closed-minded.

That might sound counterintuitive, but it turns out that higher education correlates with overconfidence in one's own ideas. The more educated a person is, the less likely that person is to change his/her mind, be open to new or different ideas, etc.

This is so well known that purveyors of political and social theories who seek to change society have focused on the universities. They know that if you indoctrinate impressionable students, it will be very difficult for these students to change their worldviews in the future. That's how you change society organically. That's how the Academic Cycle works.

The more education you have, the less concerned you are that the news you get might be biased. 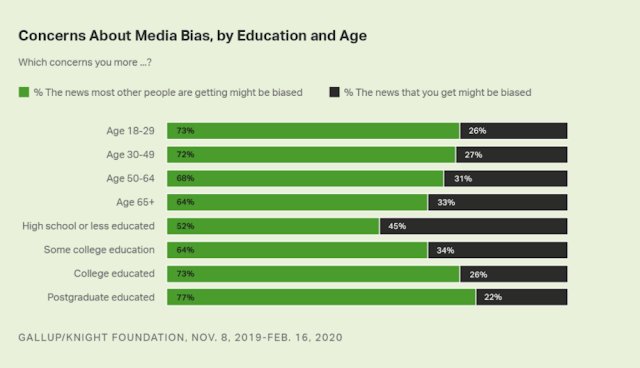 This helps us understand the ongoing censorship by the M2C citation cartel. Because of their credentials, they deem themselves "gatekeepers." They have appointed themselves as qualified to filter the world of information to keep out what they consider to be bad information, such as the teachings of the prophets about the New York Cumorah and the teachings of the prophets about the translation of the Book of Mormon.

The credentialed class come to view those who disagree with them as worthy of contempt.

This creates a common institutional problem. The credentialed class, overconfident in their own beliefs, become the gatekeepers for decisionmakers. They wrap silk threads around leaders, creating a cocoon to "protect" them from incorrect beliefs and information.

By depriving decisionmakers of relevant evidence and alternative perspectives, the credentialed class channels decisions in the direction they desire.

Readers of this blog (apart from M2C advocates) are open-minded and happy to consider alternative points of view. We have a healthy skepticism about what we read and hear, and we don't accept what the credentialed class serves up without first comparing it to the teachings of the prophets.

We're also happy to let everyone think and believe whatever they want. We invite people to consider every point of view, every fact, every theory, and then make up their own minds.

We like it when people make informed decisions. We think extrinsic evidence leads us to support, not repudiate, the teachings of the prophets.