Constitution Day - the operating system for the U.S.

Yesterday, September 17, was Constitution Day in the United States. 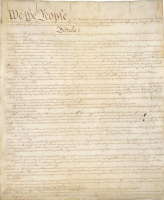 Years ago I won some prizes on a radio show because I was the first caller who knew the Constitution was signed on September 17, 1787. On that day, 39 of the 55 delegates from the States signed the Constitution. Some declined to sign because there was no bill of rights (later added by the first ten Amendments) and because the Constitution permitted slavery (later banned by the 13th Amendment).
But those who did sign rejected the tyranny of the existing forms of government in most of the world, consisting of kings who were unaccountable, or barely accountable, to the people. The signers created the United States of America and set up an "operating system" that was sturdy and flexible enough to produce many future iterations, all leading toward "a more perfect union."
Would you have signed the Declaration of Independence and/or the Constitution?
There's a cool webpage that let's you add your own signature. Go to
https://www.archives.gov/founding-docs/join-the-signers

In commemoration of Constitution Day, I'm speaking on the topic of "The Liberty of Righteousness" at an online forum tomorrow on the Title of Liberty.

Here is another way to look at an operating system for the country as a whole:

"Patriotic education" in schools is, in essence, the Operating System for the United States. You have to get the OS right to make any of the other apps operate.way to look at it is this:

"Patriotic education" in schools is, in essence, the Operating System for the United States. You have to get the OS right to make any of the other apps operate.

Trump discussed the “left-wing indoctrination” in many American schools as well as curriculum that “views every issue through the lens of race." The 1776 Commission will lead to “patriotic education,” in connection with a grant awarded by the National Endowment for the Humanities to develop a ”pro-American curriculum that celebrates the truth about our nation's great history."

This all leads me to wonder, what is the operating system for the Church?

We'll discuss that more next week.