This is a little preview of something I'm going to write about next week involving change.

Many readers here know that my wife and I live on the Oregon coast. People are asking if we're okay with all the fires and smoke. The short answer is, we're fine. 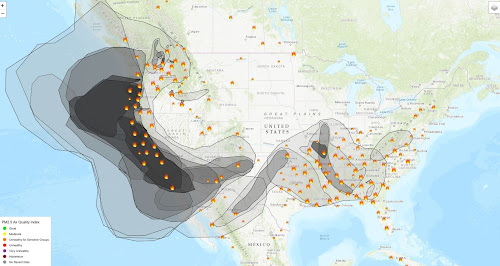 We left last Friday, before the fires started in Oregon.
Some friends who were visiting stayed at the house, though, and they experienced the smoke, red skies, and falling ash on Tuesday and Wednesday.
A fire started about 3 miles outside our town but was quickly controlled, fortunately.
Lincoln City, a town about 40 miles north of us, was evacuated yesterday. We were in Lincoln City about 10 days ago and it is unimaginable how serious the situation is. 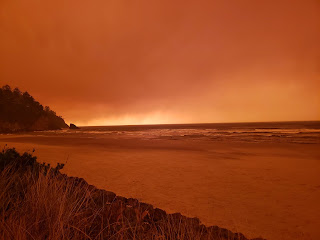 This photo is one of many on the Internet. It is not retouched, photoshopped, or shot with a filter.
The situation is the culmination of a "perfect storm" of conditions. Unusually strong easterly winds, like the ones that struck northern Utah this week, knocked down trees and power lines.
The downed power lines started fires.
Because it has been hot and dry all along the Pacific Coast recently, fires spread quickly.
_____
I flew from Portland, the scene of over 100 days of sometimes violent demonstrations, to Rochester, NY. The night I arrived in Rochester was the second night of demonstrations that have continued through last night. Protesters have invaded restaurants and forced diners to leave, etc. The police chief and the rest of the police command staff have resigned.
After a few days in Palmyra, Harmony, Fayette and other places, I flew to Salt Lake City to see the destruction caused by the strong winds, including downed trees and people without electricity.
These were the first flights I had been on since March. Airports are mostly deserted. The flights I was on (2 flights each way) were at about 50% or less capacity. This was a stark contrast to January-February, when we went on 27 flights among 10 countries in southeast Asia and Australia/NZ.
We all know how much life has changed during the COVID 19 outbreak. People are moving out of cities for more rural areas. Where we live in Oregon, there is a lively real estate market with lots of homes for sale and lots being bought. I checked last night. There is only one house for sale, plus two new homes under construction listed. Those who live in Utah know how active the housing market is. We're getting cold calls from agents asking if we'd consider selling our home in Salt Lake.
Many more changes are imminent. In the U.S., we have a lively election underway. Big changes are happening all around the world, including political, economic, and social changes. Individually, people everywhere are reassessing their priorities and futures.
This is a tremendous opportunity for the spread of the Gospel and the establishment of Zion. However, there is also a "perfect storm" of conditions that impede progress.
We'll discuss that more in upcoming days.