Book of Mormon geography in one graphic

Here's a summary of the entire debate over Book of Mormon geography in one graphic. People accept one assumption or the other, and then confirm their biases accordingly. 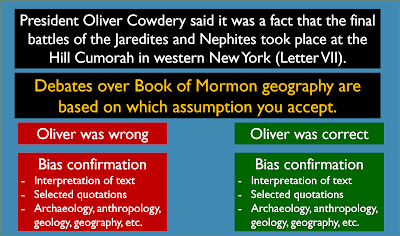 Of course, it's not only Oliver Cowdery who was wrong or correct. The New York Cumorah has been taught by every prophet/apostle who has addressed the topic of Cumorah. But Oliver takes the blame/credit for putting it into print (even though historical evidence shows Joseph taught it even before he got the plates, which he could only have learned from Moroni.)
Book of Mormon Central (BMC) and the rest of the M2C citation cartel assume Oliver was wrong, and everything they produce flows from their obsession with offering evidence to oppose what Oliver taught. Their employees and followers amplify the message.
BMC employees know perfectly well that M2C is based on the assumption the prophets were wrong and have misled the Church. You can see them on the Internet trying try to justify their position. As good employees, they promote the BMC message and pretend their M2C theory is "evidence driven." Some of them may actually believe that, but everyone outside their M2C bubble recognizes bias confirmation when we see it. Not only because M2C repudiates the prophets, but because M2C relies on a series of logical and factual fallacies.
Many of the followers of M2C don't (yet) realize that their beliefs are based on this simple assumption, but more and more are learning the facts.
_____
Those of us who assume Oliver was correct offer equivalent evidence to support what Oliver has taught.
We think it's more useful to find and share evidence that corroborates what the prophets have taught than to find and share evidence that repudiates what the prophets have taught.
The question about Book of Mormon geography boils down to this: Which assumption do you accept?
_____

BTW, this is part of a presentation that I did recently which will be included in the online conference that starts today.