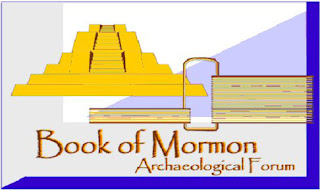 Based on some comments the other day, I'm not sure BMAF got the memo about everyone getting along, but that's fine. As I mentioned, BMAF is basically a club for those who want to continue promoting a Mesoamerican setting for the Book of Mormon. Once you understand that, they're harmless.

Just look at their logo. They've got a Mayan temple juxtaposed to what is presumably Mormon's plates. Nowhere on those plates is there a single mention of Nephites building stone pagan pyramids with steps like this. This logo is science fiction.

One time we were at a Pizza Hut and a group of Klingons came in. They were speaking Klingon, wearing the costumes, etc. They were having a lot of fun and we enjoyed watching them. Nobody thought for a moment that they were real Klingons. Nothing to worry about.

That's what BMAF reminds me of. It's a group of people who have a common interest in promoting the Mesoamerican model, for whatever reason. They have their own language, their own social network, their own publications, their own maps, etc. They think the Nephites were Mayans. They continue to create artwork depicting the Nephites as Mayans, like this one showing Alma in a Mayan costume, surrounded by Mayan glyphs. They have a lot of fun, just like people in most clubs. I've pointed out before that they wear their own special lenses so that they see Mesoamerica in the Book of Mormon. Again, no problem--as long as you recognize what they're all about. Remember their mission statement: "Our goals are (1) to increase understanding of the Book of Mormon as an ancient Mesoamerican document." 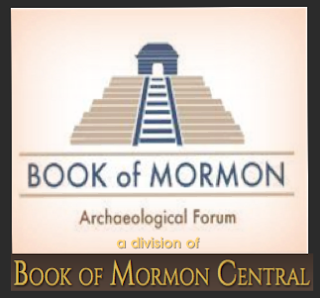 Although I said there is nothing to worry about, a lot of people have expressed concern about BMAF joining Book of Mormon Central. Frankly, I share that concern. On the one hand, BOMC has officially adopted the Church's position of neutrality on Book of Mormon geography questions. The people at BOMC are fantastic, good scholars, faithful LDS, etc.

On the other hand, now we have a division of Book of Mormon Central with a Mayan temple as its emblem. Every one of BOMC's official affiliates promotes the Mesoamerican setting. So I understand why so many people are offended by what is going on there. All I can say is, don't take offense. Just keep learning and make your own decisions. You're not obligated to believe what these groups teach.

As I mentioned a few days ago, BMAF is the equivalent of a "Book of Mormon in Cambodia" club. (Not that I have any problem with Cambodia; I've been there and I enjoyed it quite a bit. But the idea that the Book of Mormon took place in Mesoamerica is no more logical or factual than the idea that it took place in Cambodia--or anyplace else in the world outside of North America.)

BMAF has opened the door to a few issues that I haven't specifically addressed in a while, so I'll do so in the next few days. Among them are:

1. The appeal to the authority of the "scholarly consensus."
2. The DNA article on lds.org.
3. The claim that Joseph Smith said Zion was all of North and South America and that he was referring to the two continents.
4. The claim that there is evidence of the Book of Mormon in Mesoamerica.
5. The claim that Heartlanders are "discouraged" from reading scholarly material from the citation cartel.
________________________

The last shall be first.

I mentioned this the other day, but only in a comment, so I'll reiterate it here. I can only speak for myself, but I assure BMAF there is nothing that the citation cartel publishes that "discourages" me. It's a never-ending source of material, actually. I've addressed quite a bit of it in this and other blogs, as well as in several books. I have many more posts sitting as drafts in this very blog that I haven't published. My copies of books published by the citation cartel have rainbows of sticky notes, every one of them a potential blog post.

Apparently BMAF still thinks I haven't addressed enough of their material, which is why I'm addressing the five specific points raised the other day.

As I've explained, many of us who write about Book of Mormon historicity and geography have reached an understanding about comity and unity. We share a common objective of focusing on the Book of Mormon and its teachings, even if we disagree about some of the geography/historicity issues. The old model of firing shots at each other on the Internet is pointless and counterproductive, so I'm refraining from posting more on that. But to be clear, in my view, the citation cartel has published an impressive volume of bias-confirmation that doesn't withstand scrutiny, and I think I've made that point well enough that I don't need to pile on.

I think the Mesoamerican model is based on a mistake in Church history and has only become the "consensus" after scholars from the Reorganized Church developed a two-Cumorah theory, Joseph Fielding Smith denounced it, but LDS scholars embraced it anyway and fought alternative interpretations. Clubs such as BMAF exist because of their common belief in the Mesoamerican theory; take that away, and the club ceases to exist. Their members are happy with the way things are and they do everything possible to keep things that way. And, as I keep saying, that's fine with me.

But I don't think members of the Church should confuse a club with the pursuit of truth.

Maybe I should start a Letter VII club that accepts Oliver Cowdery as a legitimate, reliable and credible witness, and accepts Joseph Smith's acceptance of Letter VII. Except I don't want to start a separate organization. I think we already have all the organizations we need, and that, when presented with a fair choice between Letter VII and the Mesoamerican two-Cumorah theory, most members of the Church will go with Oliver and Joseph and Joseph Fielding Smith.

So apart from the five points raised by BMAF, I'm not going to continue addressing the Mesoamerican setting (unless BMAF or other citation cartel members think I haven't responded to some important point). Instead, I'm going to continue addressing the Church history, textual, and scientific elements that, IMO, all point directly to the New York Cumorah and the geography that grows out of that pin in the map.
Posted by jonathan3d at 10:37 AM