On Smurfs and hammers

I keep thinking I've made the final post on this blog, but then something arises.

Lately people have been asking me why the LDS scholarly community continues to promote the Mesoamerican theory. The short answer is that the Mesoamerican theory is a rational interpretation of the Book of Mormon if you 1) Don't know about or reject Oliver Cowdery's Letter VII; 2) you think Joseph Smith didn't know where the Book of Mormon took place and speculated about the setting; and 3) Joseph wrote or approved of anonymous articles in the Times and Seasons. Each individual can decide the merits of those propositions. In my view, the known facts--many of them relatively newly discovered--contradict those propositions.

When we learn new facts that contradict what we've thought for a long time, we can respond in a variety of ways. I can't speak for anyone else, but I can offer some analogies.
_____________

But they had one remaining obstacle. 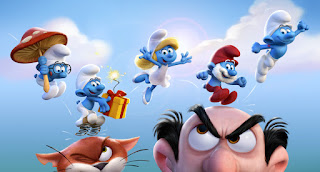 They had some rare Smurfs they couldn't replace and they were both so attached to them that they couldn't agree on how to divide the collection.

It was an object lesson in priorities and emotional attachments.

People get emotionally attached to all kinds of things, and no amount of reasoning and no set of facts can overcome deep emotions.
_______________

When our kids were young, we bought a toy that had pegs on a board and a hammer. You could pound the pegs until they were flush with the board, then turn the toy over and pound them back from the other side. 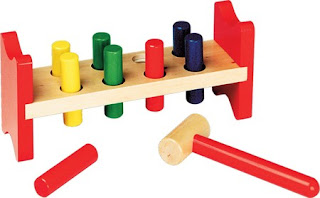 Except the kids didn't just pound the pegs.

They thought everything they saw needed pounding with that hammer.

The common phrase "to a hammer, everything is a nail" is an example of the law of the instrument. It's also called Maslow's hammer or a Golden Hammer. The idea is that people tend to rely on a familiar tool.

There's nothing wrong with deformation professionnelle so long as we are cognizant of it and adjust our thinking accordingly. This means having an open mind, which is very, very difficult, especially when it implicates one's profession and life's work.

I've made it plain throughout this blog that I have found a high degree of deformation professionnelle in the field of Book of Mormon geography. Perhaps more than I've encountered in any other field, actually. Two rhetorical techniques pervasive in the literature are good examples.

First, advocates of a particular theory create lists of "requirements" that just happen to be perfectly met by their preferred geography. To me, these are transparently circular arguments, but I see them all the time so some people must think they are meaningful.

Second, closely related to the first, a lot of manipulated expectations are set up, which again happen to be perfectly satisfied by whatever analysis is being employed. I addressed a recent example that involved an analysis of tribal vs. state-level society.

I recommend that when you read an article or hear a lecture, you consider whether, and how, the content is driven by deformation professionnelle.
___________

I freely admit my own professions have affected my approach to these issues. I've mentioned in this blog that I also see things through the lenses of my professions. So here is a summary of my own deformation professionnelle. (This is just a quick summary, but feel free to add more examples in the comments.)

As a lawyer, I tend to think issues that can't be resolved by negotiation can be resolved by appeal to a tribunal, based on presentation and comparison of facts and analysis. (In the case of Book of Mormon geography, negotiations about geography have obviously failed, so.the tribunal for now is each individual who reads, or even thinks about, the Book of Mormon).  Consequently, I enjoy the give and take of debate and argument and don't take things personally. People remind me frequently of this deformation professionnelle--i.e., others do take things personally--so I've tried to tone down the rhetoric and sharpness. (There are two ironies here. First, I really like the people I've met who write and think about this topic, regardless of what they write and think. They're all great people and I don't intend to offend anyone. Challenge, certainly, because of the content, but not offend. Second, I thought I had been toning it down from the outset, which shows how severe my deformation professionnelle is.)

This deformation professionnelle also leads me to object when the tribunal (each individual) hears only one side of a case. That's why I keep harping on the monolithic approaches to Book of Mormon geography taken by the publications and institutions I can't name without offending someone.

Another aspect of my defomration professionnelle--the lens through which I admittedly view the world--involves credentials. I've been in situations where competent experts (we call them expert witnesses) completely disagree. In the legal profession, you can hire just about any credentialed opinion you need to support your client's case. I've also funded research at universities, where I learned you can get pretty much any result you want (within reason) depending on how you word the grant and select the recipient. Consequently, for better or worse, I tend to disregard credentials and focus instead on facts and analysis. As I've written before, PhD doesn't stand for "open mind." It doesn't stand for "objective," "rational," or even "fair." I don't accept the rationale of deferring to someone because of their expertise. If their expertise can help them present facts and analysis, great. But it's not the expertise that matters; it's the facts and analysis that matter.

For better or worse, I also tend to separate emotional elements in my analysis because I recognize how emotion colors arguments and perceptions. I started discussing that in my blog post about white hat thinking.

As an educator, my deformation professionnelle leads me to think no two people learn the same way, so I try to offer as many different approaches as I can think of to convey information and encourage students to learn for themselves. I have also found that students are more interested in controversy and tension than in rote facts. They don't like being told what to think. But of course some approaches don't work for some students, and a lot of students don't want to learn (or think) for themselves. (I can also see from the statistics that my "controversial" blog posts generate far more views than the "tame" ones. I don't write click bait on this blog, but there may be a time and a place for that.)

As a business guy, I think common sense is more effective than rhetorical flourishes and semantic gymnastics. My deformation professionnelle biases me toward thinking that institutions and organizations tend to acquire and defend Groupthink. Preservation of and loyalty to the organization become high priorities, and an element of tribalism seems to materialize as soon as one joins "the team." Consequently, disruptive technology (and ideas) are important for progress and improvement--and especially for the pursuit of truth. Organizations that respond effectively to disruptive technology succeed; those that don't, fail.