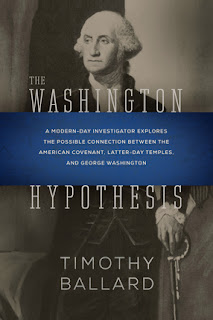 Here's a great book by Tim Ballard that I highly recommend:

Here's the description from Deseret Book:

We know that George Washington was a moral man and an inspiring leader, but did he possibly know more than we suppose? Was he a national covenant maker like Moses, Abraham, Lehi, or Captain Moroni? did he understand that he was fighting for the liberty of a promised land protected by God, a place where the Lord's holy temples could be built?
The Washington Hypothesis explores the intriguing evidence that Washington and the other Founding Fathers knew the Lord had a greater purpose for America. It takes us on a fascinating historical journey through the miracles of the Revolutionary War to the foundational documents of this great nation to the symbolism evident in every corner of the nation's capital. Exploring how Washington's beliefs framed his every action, author Timothy Ballard draws compelling conclusions about the divinity of that great leader's calling. As we see the evidence of the Lord's hand in Washington's life, we may discover a much grander design at work in the founding of our nation—and thus a greater desire to strive to preserve those promised blessings.