Another reference book that sows confusion

It's no wonder so many members are confused about the geography issue. There is a long academic tradition of conflating two separate points, and I'm giving another example in today's post.

Church leaders from the beginning have been crystal clear about two things:

2. We don't know the specifics of other Book of Mormon locations.

Because many LDS scholars claim to know more than the prophets, they have taken point 2 and applied it to point 1. This gives them license (they think) to repudiate what Joseph, Oliver, and every other prophet and apostle who has spoken about Cumorah has taught.

These intellectuals have succeeded mainly by keeping Church members ignorant of Letter VII.

The purpose of this blog is to refocus on the two points above. I think it's a travesty to have our own scholars and educators mislead the people into thinking Cumorah is somewhere other than in New York.

The rest of the geography, of course, is not officially known, so it is open to anyone's personal study, speculation, debate, etc. I'm happy to share what I think, but I'm also happy to hear what others think. None of it is official except for the location of Cumorah, because that location is established doctrine, consistently taught by the First Presidency and Quorum of the Twelve for over 150 years.*
_____ 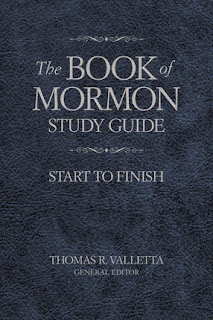 Deseret Book publishes The Book of Mormon Study Guide: Start to Finish. It contains a lot of good material, but it's another example of failing to tell members of the Church the whole story and guiding their thinking toward the Mesoamerican geography.

The General Editor is Thomas R. Valletta. Here is his bio, from the Deseret Book web page: https://deseretbook.com/p/book-of-mormon-study-guide-start-to-finish-ppr?variant_id=118342-paperback


The book purports to be an effort to remain "neutral" regarding geography, but I'll show you it is not only not neutral, it promotes the Mesoamerican/two-Cumorahs theory by keeping readers ignorant of what the prophets and apostles have taught. 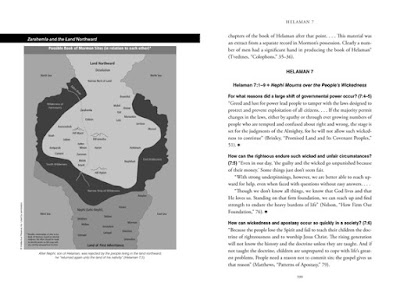 The top caption is "Zarahemla and the Land Northward."

The asterisk refers to the text in the lower left:

"*Possible relationships of sites in the Book of Mormon, based on internal evidence. No effort should be made to identify points on this map with any existing geographical location."


Do you see the problems?

Not only does this discussion reject the New York Cumorah.

Not only does it promote a fantasy version of the Book of Mormon that supports the anti-Mormon position that the book is fiction.

But it also teaches a specific interpretation of the text, taken from the scholars who promote the Mesoamerican/two-Cumorahs theory, with the objective of imprinting this interpretation on readers. And this is from the Director of Curriculum for Seminaries and Institutes.

This map shows the River Sidon flowing northward, a key claim by the advocates of the Mesoamerican/two-Cumorahs theory that does not appear anywhere in the text. It also portrays the "narrow neck of land" as a not-so-narrow hourglass shape, another interpretation advocated by the Mesoamerican advocates because it fits Mesoamerica.

Aside from the Mesomania problem, we can't underestimate the damage caused by these fantasy maps.

Joseph and Oliver showed us a different approach.

When confronted with the fiction claim in 1834 (it was promoted in a well-known book published near Kirtland, Ohio, in 1834 titled Mormonism Unvailed [sic]), they wrote Letters VII and VIII. They declared it was a fact that the Book of Mormon Cumorah (Mormon 6:6) was located in western New York. The very hill where Joseph obtained the plates was also the site of the final battles of the Jaredites and Nephites, and the location of Mormon's depository of Nephite records.

Their focus on the factual location of Cumorah--something they knew from personal experience, as Brigham Young and others explained--repudiated the claim that the Book of Mormon was fiction.

But instead of following their example and supporting what Joseph and Oliver taught, our intellectuals are supporting the critics who teach that the Book of Mormon is fiction.

The Cumorah location does not specify the locations of other Book of Mormon sites, but it is a firm pin in the map that we should not remove, unless current Church leaders revoke what Joseph, Oliver, and all of their successors have taught.
_____

Regarding Cumorah, the book tells us this on page 738, which discusses Mormon 6:

Where was the "land of Cumorah"? (6:2-4) "There are many theories about precisely where the land of Cumorah was located, and those who advocate each view are very sure about their views. The North America theorists believe this is a clear reference to the Great Lakes and... the northeast part of the United States. The South America theorists posit that this is a reference to the plains of Imbabura in Ecuador's lake country... The Mesoamerica theorists identify an area of southern Mexico on the eastern shore of the continent just north of the Yucatan Peninsula.... But when it comes to Book of Mormon geography, the only official statements that have been made by Church authorities say that we do not know" (Chase, Making Precious Things Plain, 3:212-13).
_____

Let's think about this a moment.

Do you see how this book conflates point 2 with point 1?

That is exactly backward.

Instead, because we know the location of Cumorah, we should be seeking to understand the text in a way that corroborates and supports the prophets and apostles, not in a way that undermines their consistent teachings.

The intellectuals' argument that "we don't know where Cumorah is located" works only by keeping uninformed readers ignorant of Letter VII.

This Study Guide, like so many other books, is part of an intentional effort to keep members of the Church unaware of our history and the teachings of Joseph, Oliver, and all the other prophets and apostles.

This is the same technique being used right now at BYU and throughout CES. It is being used by FairMormon, BYU Studies, Book of Mormon Central [America], and other outlets for the theories of the intellectuals.

As I pointed out at the beginning of this post, it's no wonder members of the Church (and investigators, and the world at large) are confused about the Book of Mormon. Joseph Fielding Smith warned that because of this theory (the Mesoamerican/two-Cumorahs theory), members of the Church would become confused and disturbed in their faith. That warning is just as relevant today as it was when he first wrote it (and when he repeated it as President of the Quorum of the Twelve).

Think of the long-term impact of teaching the youth of the Church that the only way to understand the Book of Mormon is by imagining it in a fantasy world. Oh, and by the way, they also teach the youth that Joseph, Oliver, and all the other prophets and apostles were wrong about Cumorah.

Then compare that with the long-term impact of teaching the youth of the Church what Joseph and Oliver taught; i.e., that it is a fact that the Book of Mormon relates the actual history of real people whose demise occurred in a specific spot in western New York that you can still visit today. Oh, and by the way, this approach also supports the prophets and apostles by affirming they were correct about Cumorah.

Actually, we don't have to think about the long-term impact of the teachings of the intellectuals. We see the evidence of it all around us.

The teachings of the intellectuals compound the problem by undermining faith in the prophets and apostles, starting with Joseph Smith and the Three Witnesses.

This is a major issue for reactivation and retention, but also for missionary work. Questions about the Book of Mormon are a major impediment for investigators.

I often hear the argument that people need a spiritual testimony of the Book of Mormon, and of course that's true.

But focusing on a spiritual testimony is not how Joseph and Oliver responded to the anti-Mormon claim that the book was fiction.

In fact, I'm not aware of any instance when Joseph quoted Moroni 10:4-5.

Instead, he taught that people would know the truth by abiding by the precepts of the book (an allusion to John 8:31-32), and he gave specific connections between the text and the real world, including Cumorah, the mounds in the Midwest, the plains of the Nephites, etc.

And he never once connected the Book of Mormon to Central or South America.

Despite all of this, our intellectuals continue to reject the unmistakable witness Joseph and Oliver gave us.
_____

*The Church has explained how members and the world at large can know what official Church doctrine is. https://www.mormonnewsroom.org/article/approaching-mormon-doctrine.

"With divine inspiration, the First Presidency (the prophet and his two counselors) and the Quorum of the Twelve Apostles (the second-highest governing body of the Church) counsel together to establish doctrine that is consistently proclaimed in official Church publications."

This is exactly how Letter VII was presented.

It was written and endorsed by the First Presidency in 1835.

It was accepted by the Quorum of the Twelve, who taught it for the rest of their lives.

Joseph had it copied into his own history as part of his life story.

It was consistently proclaimed in official Church publications, including the Messenger and Advocate, the Times and Seasons, the Millennial Star, the Prophet, the Gospel Reflector, and the Improvement Era.

For over 150 years, it has been consistently proclaimed by members of the First Presidency and Quorum of the Twelve speaking in General Conference, as well as in their books and articles.

It has never been modified or revoked.

But intellectuals in the Church don't want members to even know about it, and when they do discover it, the intellectuals tell them not to believe it.